A Floating Circus Over Sand

The Long Beach Kite Festival certainly stacks up (no pun intended!) as the "greatest, grandest, kite festival on the North American continent."

That was the pronouncement of a very well-known kiting magazine based in the USA. You only have to look over the schedules of past years' festivals to be impressed.

For example, the opening day might be just "trains, arches, and multi-line kite stacks." Another day might be devoted largely to kite-flying competitions.

Spectators who flock to this huge kite-circus number in the tens of thousands. Like many similar festivals, the crowd has ample opportunity to fly something as well.

A fair amount of imagery from these big events ends up on photo-sharing websites like Flikr, for all to see. And of course, anything with so much color and movement inevitably ends up partly documented on the big social sites.

Speaking of which, there does seem to be a general trend toward exploiting the movement of single-line kites and their tails. The designs just keep getting better, with the eerily realistic movement of many designs. Just check out those big inflatable sea creatures! Even otherwise fairly boring single-liners such as sleds and parafoils can now be spiced up considerably with the addition of fantastic, flowing tails!

On the Internet, it's not hard to get a good feel for the festival even if you have never actually been to Long Beach to participate in the experience.

The Long Beach Kite Festival is held during the third week of August every year. It's an annual event like most major International kite festivals. Besides the absolutely spectacular visual displays, kiting competitions of many kinds are also a big component. I like drawing things into categories, so here's another big one for this event—the not so obvious! There's more on these categories further down. 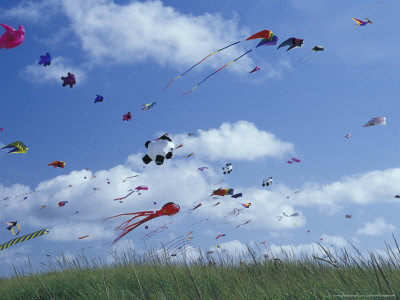 Isn't that what these events are mainly about? Here's just a selection of some typical displays which each have their own brand of eye-popping or smile-inducing power! By the way, that photo up there was taken at the Long Beach event.

Just to give an idea of the depth and breadth of this festival, here are some of the organized competitions at a past event. It's quite a comprehensive list! Although one day of the week featured most of the flying competitions, there were a few others scattered through on other days as well.

Note: Anything with "fighter" or "battle" in it is won by the last kite flying! "Ballet" refers to creative flying routines performed to music. "Precision" refers to stunt flying that involves guiding kites through pre-set standard figures in the air:

Notice that no age group or skill level is left out. There's something for everyone!

The Long Beach Kite Festival
The Not So Obvious

Although people come to kite festivals to watch spectacular color and movement in the air, there's a lot more going on than first meets the eye! Here's just a short sample of the less obvious classes of activities that happen at the Long Beach Kite Festival:

This separate annual event deserves a mention on this page, since it involves a lot of kites and is also held in Long Beach, Washington! The key to holding a windless event is to have it inside a large building with all fans, air conditioning, heating, and so on switched off! For example, one year the Windless festival was held inside the Ocean Park Elementary School gymnasium.

The Long Beach event in 2008 was the seventh Windless Kite Festival in a row. That makes it the longest-running indoor event in North America.

The kites flown at these kinds of events are so light that even a bit of air circulation would make things difficult for the flyers. In still air, it's just the motion of the flyer that generates some airflow over the kite. Under these conditions, a very fine degree of control can be exercised over the kite.

It's all about doing slow motion and low-altitude tricks. Well, it's not always so slow, since a very light kite can be accelerated very quickly with just a little effort! Kites can be yanked from one side of the flying circle to the other in under a second and snapped from the floor to straight overhead very quickly as well. The necessary airflow over the kite is generated by walking backward, away from the kite.

Although I've never tried it, some of our MBK kites would probably be fun to fly inside a large building. In particular, if the 2-Skewer Delta was constructed using the lightest plastic sheet and clear sticky tape, it would give a hi-tech light-wind delta a run for its money I would imagine. Anyway, one day we would love to attend the Long Beach Kite Festival —either the Windless or Winded one would do!