Landboarding (or land kiteboarding or even flyboarding to some) is a similar concept to kitesurfing. You just don't get wet though ;-)

All it really takes to get into landboarding is some open space, a traction kite, and a landboard of just about any kind. Oh, and you need some basic power-kite-flying skills of course.

The idea is to get the kite overhead first. Then, when you are on your board and ready to roll, the kite is brought down to generate some sideways pull like a sail. With the kite moving in the same direction as the board, you are on your way!

Here are some reasons why newcomers to traction-kite sports might prefer landboarding over kite surfing out on the ocean waves:

Landboarding has been around since the 90s, and (like snowkiting) is making use of all the latest traction-kite technology.

The sport involves getting pulled across the ground by a power or traction kite—just like the lady in the pic down there.

There are just so many combinations of these kinds of outdoor sports. If it floats on water, slides on snow, or coasts along on wheels, somebody somewhere has harnessed the power of a kite to add that extra dimension! 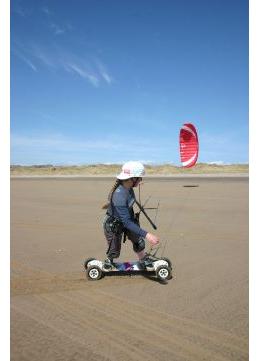 Here are all the names you might come across, with regard to kiting with a landboard or other vehicle:

That "land surfing" one gives a clue to as to one big factor that's driving kite boarding. What do surfies do when the water is too cold or there is not enough wind to kitesurf? Many can now hop on a landboard and do much the same sort of stuff, across the sand instead of water.

There's another factor too. What do snow skiers do when the snow melts? Downhill skiers that is, not cross country. For this situation, "mountain boards" were invented, so it was possible to race downhill on these oversized skateboard-like contraptions. Interestingly, in many cases the mountainboarders raced down the very same slopes that they skied down in winter!

Eventually, someone with a traction kite decided to try the obvious. Of course it worked very well, although kite boarding was best done on the flat, rather than a slope. When this got more well known, snow boarders everywhere began to realize they weren't restricted to kite boarding in winter. They could just swap their snowboard for a landboard and still go kiteboarding.

Kite boarding over land tends to attract people who just want to do tricks, or "freestyle", like some kite surfers. That's probably because they are kite surfers first and foremost! There doesn't seem to be much written about landboarders going long distances cross-country like the keenest kite skiers do. Despite this, it is possible to go very fast across land. Also, at the other end of the scale, trundling along slowly in a kite buggy (using a smaller traction kite) can be quite relaxing!

Where to do Landboarding 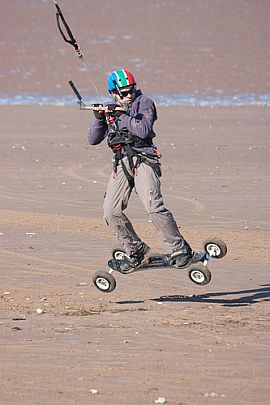 The best place to do kite boarding is any large flat area with constant wind and no obstructions. However, with some care, any open space can be used. You just don't want yourself or the kite to crash into anything. In particular, things to avoid include power cables, buildings, and other people.

Here's a summary of the types of areas kite boarders can be seen at:

Here in Australia you could probably add clay pans and salt lakes as well.

Oh, and don't forget airfields and airports, if you can get past the security guys. Just kidding! There's some clips on YouTube of some Russian guys doing their stuff with large aircraft parked in the background. Now that's actually true!

Talking about YT, here's a clip showing some freestyle kite landboarding in an ideal location that even signposts the activity.

There are three approaches to getting into landboarding:

Needless to say, taking a course is expensive but is sure to give a problem-free and safe learning experience.

One kiting school has the following sequence of lessons:

With learning out of the way, you can head off to the nearest large open area and start covering some ground. A trainer kite with only 2 square meters of area is good to start with. It's nice and safe, although of course you won't get much speed up in most wind conditions.

Later on, you can buy one or two larger kites to enable speedy kiteboarding in a wide range of wind conditions. Just pick the kite that suits the day. That little trainer might come in handy in a gale!

If you're game (and have good basic skills) then you can start to tackle those ramps and grinders that are provided in some of the kite landboarding parks. I can imagine that some parts of the world would be a long, long way from the nearest dedicated landboarding park though.

Not everyone is dead-keen on doing tricks. For example, there's a few speed freaks out there too. They like to compare each other's GPS-verified top speeds and post them on the Net—like this guy:

Newgale. That's an interesting name for a windy site ;-)

Note the speed of nearly 70 kilometers per hour. That's moving, but I guess somebody has beaten it by the time you read this! 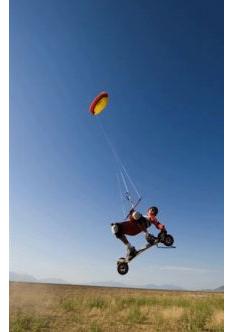 Do you want to get serious? There is a competition circuit for landboarding, although it is much smaller than for kite surfing and is likely to stay that way for a long time—maybe forever. The kite landboarding comps show off almost everything that you might see competitors doing over water.

Here's a summary of the types of stunts that can be done:

As you can imagine, getting any of this wrong is likely to hurt more than if it was done over water! So, safety gear is very important.

The best riders can put on a decent show using the older-style fixed-bridle kites on handles, as well as with the depowerable-kite / control-bar combination that is so popular today.