Without ever leaving the ground! To keep things simple, I'm going to just talk about doing kite stunts with 2 line kites. That's a good place to start anyway, before moving up to those fancy quad-line kites.

Apart from the kite manufacturers, very few people would build anything for doing kite stunts these days. The shop bought ones are so good, and some of them aren't too expensive either.

With a delta stunt kite or dual-line parafoil you can really feel like an aerobatic pilot! Particularly when you get good at flying kite stunts accurately, coming really close to the ground from time to time without crashing... 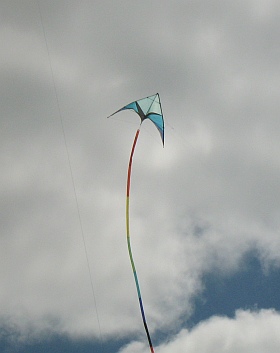 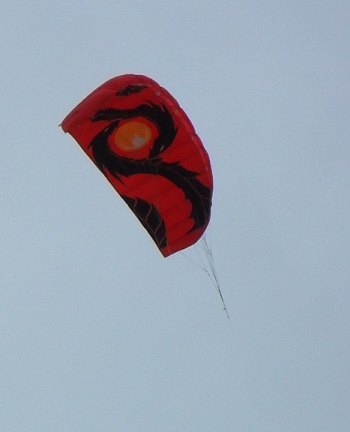 Just to add a bit extra to the spectacle, many shop-bought kites these days are designed to be easily 'stacked'. This lets you fly more than one kite at a time, on one set of lines.

I have memories of an expert flier doing kite tricks with 3 tiny black deltas, stacked together and zipping around very fast in a stiff breeze. That was at the Adelaide International Kite Festival, back in March 2007.

If you browse around the Web, the obvious source of visual demos is YT videos. Just getting the kite into the air can be a challenge for the first-timer! But the right technique makes it easy, as demonstrated in this video. 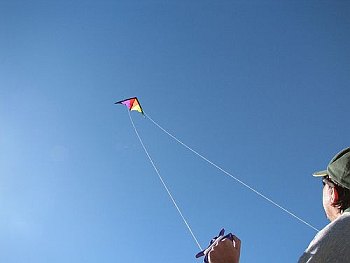 Anyone can fly a few loops and figure 8's and zip around here and there in straight lines...

It's easy to pull the left line to loop the kite left or maybe pull one line and push the other at the same time to snap the kite around in a really tight turn. 'Pull turns' and 'combination turns' they're called, and they're the basis of most kite stunts.

Another technique for tight turns is the 'push turn'. Yep, just push one handle towards the kite to momentarily slacken off that line.

Sooner or later, it's good to learn a few precision figures for a bit more of a challenge. Not to mention seriously impressing other family members when you pull off your best kite stunts. ;-)

What do some precision figures actually look like I hear you asking...

How about seeing some animated graphics on the Web! Check out this web page created by a very skilled webmaster who has re-created the movements of a kite going through all the standard competition figures. Once you are at the page, just click on a maneuver name to see an animation.

For example, Circle Over Diamond is one of the kite stunts. You should see a grid overlaid on a moving cloudy sky background, with a little kite flying along a red line which represents the figure. The moving kite can be paused and re-started.

Some technical info, in case you find the animations don't work. I have tested a few of them using the Internet Explorer browser (V7) and the Mozilla Firefox browser (V2 - V9) with the latest Flash plug-in installed. Most browsers should work fine as long as the Flash plug-in is at least version 4. More recently, in 2013 the animations were updated to play in browsers that don't support Flash. That should include iPhones and iPads. I can vouch for the fact that they work well in Chrome!

There's a little booklet available for just a few dollars in kite shops. It's called Sport Kite Precision Maneuvers by David Gomberg. There's that name again. :-) You can test your skills by learning to fly such stunts as Ladder Down and Eight In A Rectangle.

Want to get a bit more official? Ok, in the International Sport Kite Compulsories Book there are the Dual-line Individual figures. If you ever consider entering competitions, there are just 15 figures to learn if you're not in a team.

You know, it's really pretty easy to sum up the safety aspects of flying stunt kites. Just have a good look around your flying site, and imagine every single thing that could possibly come into contact with your kite or its lines! Keep in mind you might have to back up a few steps while doing kite stunts, too. Can't see any problem? Time to fly!

About the only other thing to consider would be to not fly in bad weather. Lightning and/or very strong wind don't mix with sport kite flying! That's just common sense.

In case you don't trust your imagination, here's a list of things not to hit. ;-)