Useful Info Plus a General Ramble

Get ready for a whole load of kite-string info, trivia, and anecdotes! First of all, this collection of info and kite-string trivia is most relevant to single-line kites. 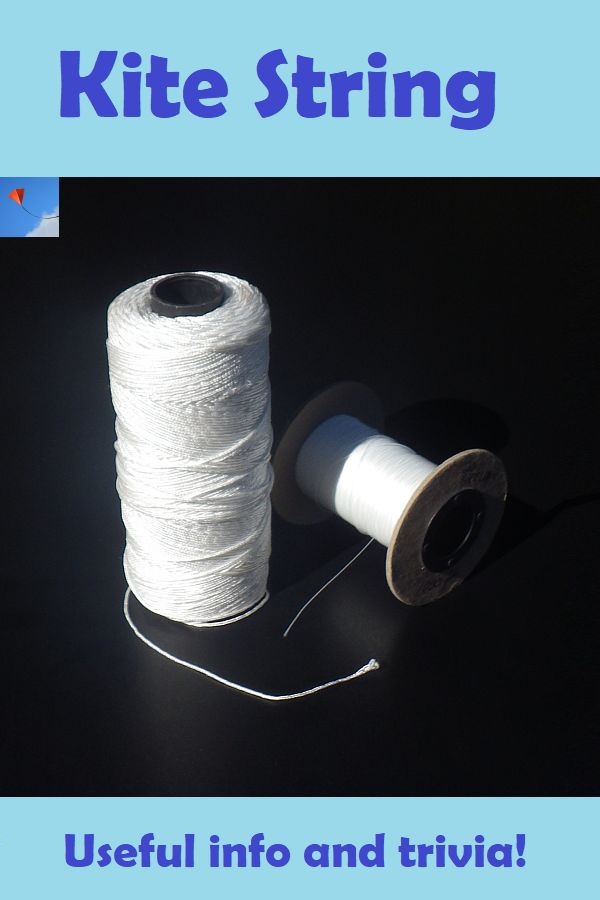 Here at MBK we made kites from bamboo skewers or hardwood dowel for the spars and plastic sheet or Tyvek for sail and tail material. A 50-pound line had ample strength for the 1.2 m (4 ft.) span Dowel kites. The larger ones, including the Multi-Dowel Series of kites, flew on 200-pound braided Dacron. Plus we very occasionally would buy a kite.

Much of the material on this page is drawn from our own kite-making and flying experiences. If you get into single-line kite flying, you will eventually bump into three main types of line. See the bullet list below: 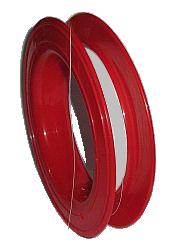 It's also worth noting that for fairly small kites, say up to 30 cm (12 in.) span, polyester sewing thread is perfectly practical. A simple square winder works well, which you rotate around to reel in and let out line. This method avoids putting tangle-inducing twists in the thread!

Nylon and polyester are also available in the braided style of manufacture. Braided kite string is pricey because it's more expensive to make, but it reduces the hassle factor considerably! Tangles are much less of a problem. Braided polyester is very popular for mid-to-large-sized single-line kites.

Also worth a mention is Kevlar, a material used often with sport and power kites but only for special-purpose single-line kites. For example, a large delta designed to break altitude records! Note that using Kevlar is somewhat antisocial when flying near other kites on nylon or Dacron. Kevlar is abrasive and will easily cut through other types of lines!

An interesting class of single-line kites are the fighters. Special abrasive line can be bought for these that is used to deliberately cut the flying line of other fighters during a contest.

Traditional fighter kites in the Middle East and Asia often use cotton line coated with ground glass. Yes, it can be dangerous!

This is not about spectacular feats performed with kite string! Rather, it's just a few little observations on what it feels like, flying a kite. 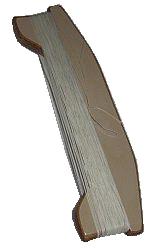 In the early days of this site, I was often out with quite small kites in windy weather.

Line lengths were less than 50 meters, and near the top of their wind range the kites didn't fly at their best line angles. Hence, they were often in rough air messed up by houses and trees upwind of the flying field.

Sometimes, with a finger curled under the line, it was just like hooking a small fish! The pulses and throbs coming through the line took me back to fishing off a small jetty as a kid.

With some practice, and quite a few kites later, it became fun to "work the line" to keep a kite up in marginal wind conditions. You know, flying on those sunny days when the wind is very light and variable. Handling a kite in this way can be quite addictive as you get a feel for making the most of the conditions! As a former glider pilot, I used to get a similar feeling from climbing in thermals.

What exactly is working the line? To me, it sometimes involves pulling in line to keep a kite airborne. At other times, it involves letting line slip out just fast enough to maintain a certain amount of tension. With practice, you can choose a tension which makes the kite drift away at a constant height off the ground. When the kite is far enough away, you just hang on and let it climb away. By choosing a bit more tension, you can make the kite climb at a constant line angle. For example, if you happen to have a delta sitting in a thermal, this can mean the kite moves directly away from you—almost straight up!

Now to look at ground launching. Some of the lady kite-flyers out there aren't keen on this. Their hearts bleed for the poor little kite being dragged across the ground! Real men do it all the time, I reckon.

Actually, I've found that ground launching off grass rarely does much harm to even bamboo and tape kites, if done with care. Most designs tend to pull up onto their nose as it catches in the grass. With a bit more tension, the kite flops down toward you, and the nose shifts around into the wind. If there's too much wind you might have to wait for a lull before the kite will flop down. Then it's easy to pop it into the air with a firm tug, without much more contact with the ground. With practice, it becomes easy and fun to do!

After a ground launch, tension in the line comes on suddenly as the kite rotates and starts to climb. Almost instantly, there is the delicious smooth constant pull of a rapidly climbing kite, accelerating almost straight up for hundreds of feet! It's a nice feeling, something like a winch launch in a glider actually—except then the pilot goes along for the ride!

Finally, a less pleasant sensation is that of your finger being sawn off by the kite string! Even though only big kites need to be flown with a glove, even a small one can whip line out pretty quickly in windy conditions. This will only happen if you deliberately let out line quickly, so it's not generally a problem with smaller kites. I did get caught one day though, when testing a new line winder... My wife was taking a video of the line flying off the winder. By the time I noticed my skin getting warm it was too late, and I had to let go in a hurry!

How's this for a photo featuring the kite string, rather than what's flying on the end... (It's eerily 3D don't you think? Try closing one eye!) 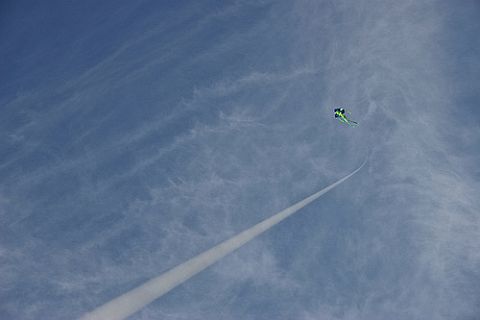 The Strength of Kite String

Now for a few notes relating to line strength.

It's surprising how much tension builds up on a winder or kite reel when the line is wound on under tension—even if it's just slight tension! Think about it. Every loop adds pressure, so hundreds of loops multiply that small amount by hundreds of times. The result can crush or crack even a sturdy-looking piece of equipment. I once destroyed a small plastic reel of monofilament that was being used to fly a small-to-average-sized shop-bought delta. By the way, I don't use fishing line any more. It can be dangerous if it snaps, due to the extreme amount of stretch.

It's well known that a chain is only as strong as its weakest link. This goes for kite string too! A knot will decrease a line's strength considerably. However, it's most convenient to connect a line to a kite with a knot of some kind. A double overhand loop connected to a bridle via a Lark's Head knot will retain almost 90% of the line's strength. Other knots in the bridle don't matter quite so much, since the load is shared between at least two lines in most bridles.

A kite string is under serious strain when it starts making noises at you! I haven't really looked into it, but my gut feeling is that it would have to be in the upper half of its strength range when this starts to happen—perhaps even in the top quarter! Of our MBK kites, the Fresh Wind Box is most likely to get up a bit of a buzz or whistle when the wind strength picks up. It's quite eerie the first time you hear it! With our bigger dowel kites (1 m or 4 ft. span), we used the 20-pound line for only the lightest of wind speeds. For most of their wind range, the 50-pound line is much safer.

Good line is strong compared to its weight. If spiders were as large as big crabs, they would spin some awesome kite string! Spider web is around five times stronger than steel and twice as strong as the best synthetic fibers, apparently. It makes you think whether it might actually be worth a try for those miniature-kites fanatics. I'm talking about those people who try really hard to make working kites that are only a few millimeters in span! Not surprisingly, the Japanese do rather well in this field with their tradition of "small is beautiful."

Here's some practical advice, from bitter experience! The best bet is to avoid getting a tangle in the first place. That's not hard to do; it's just a matter of moving around when pulling in line. The idea is to not let it pile up on the ground too much in the one spot.

When winding in a long length of loose kite string, you might notice a clump starting to form. Don't let it tighten. Just go out and loosen it up so there are no wraps.

If you can afford it, try braided line. It's much less likely to tangle. Even if it does, the resulting knots are much easier to undo than for cotton or twisted synthetic line.

Tangles are caused by long loops winding around each other. It's usually possible to loosen a tangle up by picking at it with your fingers and fingernails. Just be careful not to make the situation worse! Then start to find loops and feed them back through, one at a time. If the tangle isn't too bad, this might result in the mess finally falling apart so you can wind it all onto the reel. Otherwise, you might have to resort to feeding a free end of the line back through the tangle. Keep going until it gradually frees itself, loop by loop.

In the worst case, it's out with the scissors and ... snip, snip, tie a knot!

With a title like that, you might be bracing yourself for a 1,647-page epic. But I'll try and keep it down to just a few lines of text plus one short list :-)

I've already mentioned the three common modern materials for single-line kite string. They are cotton, nylon, and polyester. What if we go back further in time?

When large Western kites were being used for practical purposes in the 20th century, steel cable or hemp rope was used. For example, there were the Cody military kites and the large box kites used for meteorological observations.

Here's a quick roundup of traditional kite-string from other cultures: