Flying Across Flat Snow and Ice

Kite skiing is an exciting winter sport that's been popular for some years in Europe. It's also getting a lot more popular in the USA. In fact, any country these days with a decent amount of snow has a few kite skiers skimming around somewhere!

The Americans thought of it first, with just a few pioneers in the 80s experimenting with square parachutes and ordinary downhill skis. The frozen lakes of the US East Coast and Midwest were ideal for this. Some of the early parafoil kites of this era were also used. Interestingly, parafoils are still the ideal kite for this!

However, Europe was where kite skiing really took hold and first became a recognized sport. Many of the people who tried the new sport were kite surfers. They already had the kite skills needed. Now they had a whole new option available during the cold winter months!

These days there is a competition circuit, world champions, the whole bit. At the highest level of competition, riders from Europe and the USA come together to compete.

Supposing you are fortunate enough to be surrounded by snow for at least part of the year. Or, you can get to a snowy location that's relatively flat...

The first step is to buy a durable easy-to-fly two-line parafoil. Once you have spent several hours getting used to how it flies in light winds, you should do some more in fresher winds. Fly while just standing on the ground, snow or no snow.

Then, with snow on the ground and wearing skis, you can cautiously experiment with kite power :-)  If you can afford an instructor, progress will be much quicker of course.

What Exactly is Kite Skiing?

You could call it a combination of sailing, skiing, and kite flying. That makes it sound much more complicated than it really is. In fact, if you've got the basics of skiing down, the sport is easy to learn. It's much easier than kite surfing in the ocean, for example. 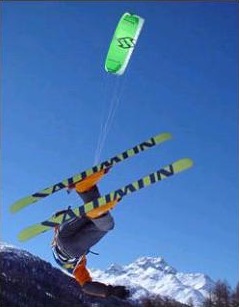 It's nothing like alpine or downhill skiing. Funnily enough, ordinary downhill skis are the usual equipment though. Snowboards or skates can be used too, but that's another topic. With a power kite or traction kite providing the pull, there is no need for a hill. The skier just handles the kite in a way that is a lot like using the mainsail in a sailing boat.

Sometimes, you will even read or hear nautical terms like "on the opposite reach" and so on. Just like sailors, these skiers can even make progress upwind by tacking into the breeze. Also like sailing, the kite-powered skier can stay out there for hours at a time, as long as the wind keeps blowing!

However, snow kiting is not all sedate sailing along chewing up the K's (or miles). With all the under-30s involved in the sport, particularly the snowboarders, there are plenty of people "getting air" high off the ground.

All sorts of tricks and stunts can be done while the kite is flown high, supporting the weight of the skier during a jump.

It's not unknown for some skiers to find a snow-covered golf course and launch themselves off the bunkers! All this is pretty physical and does have some risks. 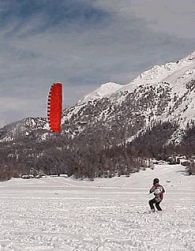 What's a perfect day for skiing with kites? Try somewhere not far from the Arctic Circle, mid-year, where the sun shines for 16 hours each day, with an average temperature of -10°C (14°F) and consistent winds of 30 kph (20 mph) or so. Perfect!

If the breeze gets up a bit more, a skilled kite skier can really zip along. 100 kph (60 mph) is not unheard of. Can you imagine how fast that would feel, so close to the ice!

There's one other little twist to this sport...

If you've mastered the basics, you can progress from flat-land skiing to climbing slopes. Yes, if the wind is right and the terrain somewhat hilly, going uphill is not a problem! Forget the chairlift, just kite up and then ski back down. That's more like it.

It's probably worth mentioning here that not everybody kite-skis on snow!

There are such things as grass skis and sand skis. These are a lot less efficient than snow skis, so traveling upwind is out of the question. That's unless some really amazing technology comes along one day that lowers the friction of these other kinds of skis against grass and sand.

I don't want to bore you with an essay on how to kite ski or how it compares to kiting on the water. Here's a set of points that sums up a few general things about it: 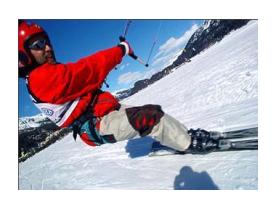 The great pictures on this page (except the last one, down below...) are from the private collection of expert kite-skater, Bob Childs, and are used with permission. Bob's site, Doomwheels Kite Skating, is rich in high-quality photographs and movies of various snow-kiting sports. And that's not to mention some good articles!

Where on this planet are there huge flat areas covered in snow or ice? Apart from the north and south poles, obviously. That's just a little too extreme! Many people use smaller areas such as parks, farm fields, and golf courses that get covered in snow during winter. However, there are some more remote but much more exciting places to go! Some kite skiers consider mountain ridge-tops to be the ultimate playground. That's because of the open terrain and smooth consistent winds.

Speaking of winds, if it's not ideal for skiing, you could always pull out a soft kite and see how that goes :-)  My parasail and parafoil designs do well in light winds...

Both those designs can be found in my Making Soft Kites e-book. Download it sometime and just print out the pages you need. Or work straight from a laptop.

Anyway, here's a roundup of some awesome places that are being used by kite skiers.

There's a number of big lakes that are popular in the USA. Two biggies are Lake Winnipesaukee in New Hampshire and Lake Minnetonka in Minnesota. There's some more near Madison, in Wisconsin. Also there's Lake Mendota to the north and Lake Monona to the south of the city. The long winters and heavy snowfalls of this area make it heaven for cross-country skiing, with or without kites.

Canada, being further north and more sparsely populated, has many great locations too. For example, there is Frobisher Bay, Baffin Island. This area has a reputation for being one of the best spots for this sport in Canada. Here, it's possible to travel across sea ice for hours on your skis, taking in the coastline views and fjords of the bay.

Joining Canada is the US state of Alaska, which is home to the incredible Bagley Icefield. That's an icy wilderness just perfect for kite-powered skiing. In fact, it is one of the biggest icefields south of the Arctic Circle. It's been used for a lot of training trips for learners.

Going yet further north, some brave souls have even journeyed across the Greenland Icecap on kite-drawn skis! I'm feeling cold just thinking about it.

What about Europe? There's some impressive snowscapes around Bergsjø in Norway. There are plenty of opportunities here for fast speeds and the occasional hill climb, all in view of the ocean!

Chamonix in northern France is famous for all sorts of alpine sports. Guess what, it has a huge flat area of glacial ice way up above 3500 meters (8500 feet), called the Col du Midi. At that altitude there's always snow! If you add the usually windy weather, you can see why it really suits skiing with kites.

Here's another mountain plateau, this time in western Norway. In fact Hardangervidda is the largest high-altitude plateau in Europe. The weather is very cold and often windy. The flat terrain and small hills are perfect for keen kite skiers! This is particularly true around the town of Haugastol.

The photo below was taken at Yellowknife, Northwest Territories, in Canada: 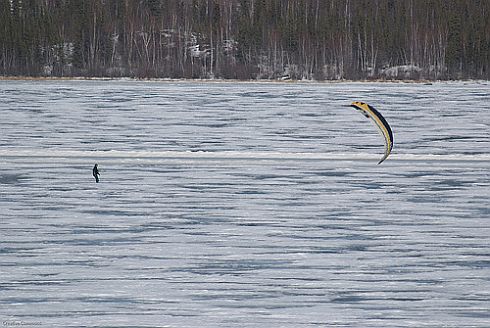