.. for big kites. There seem to be so many elaborate kite reels coming out of China! Perhaps it's not surprising that this has eventually happened, for two reasons:

As for materials, there's a lot of stainless steel. It's good strong attractive-looking stuff for kite reels that doesn't look out of place in the 21st century. However, high-impact plastic and shaped, polished wood also appear in these designs. This isn't for the line-holding reel itself but for the mounts and grips.

All reels are on an axle, with a handle or knob(s) to wind on line. A large proportion of all these kite reels also have a lock of some sort, to prevent further rotation when you've got the kite where you want it.

Here are some other features that might be spotted on the more expensive reels:

I've been using the term "big kites." But really, anything as big as or bigger than our MBK Dowel Series kites would be more convenient to fly on one of these reels. Wingspans of more than 1.2 meters (4 feet) are in mind, in other words.

I love my homemade winders, but a shiny wide-diameter steel contraption would certainly get a kite down quicker! That's not to mention improving my image as a serious kite flyer, if I was concerned about such an aspect :-)

Is your idea of a typical reel a simple drum on a stick, with a flange to hold the line in? Some of these fancy reels from China can look quite outlandish in comparison!

After looking at a whole bunch of images of these, I'll just list a few of the more intriguing ones, in the form of text descriptions.

Oh, by the way, Chinese manufacturers seem reluctant to actually give names to their kite reels! A catalog or serial number is about it, it seems. So I'll just list these as Reel 1, Reel 2, and so on. The last one, which does have a photo, is a real eye-popper!

Reel 1 was a spoked, stainless-steel design, mounted on a formed steel tube with padded rests. On the end of each spoke was a U-shaped piece which served to hold the line. For rigidity, two thin steel rods ran full circle around the perimeter of the reel, on both sides of the U-shapes.

Reel 2 featured a gold anodized reel, or perhaps it was brass. It had deep, flat flanges, drilled with numerous holes to save weight—not to mention saving money for the manufacturer! It was mounted on a simple steel tube with padded rests.

Reel 3 was in pure-white high-impact plastic, with a small number of sturdy spokes and a solid wall to hold the line in. A pistol grip in the same plastic material held the axle for the reel, and it also had a steel fitting that fed out the line. This design appeared to have a trigger built into the grip, to lock and unlock the reel. The trigger was the same white plastic.

Reel 4 was a solid circular plate that had two shapes punched out of it, forming a hand grip. Somehow a drum with solid walls was mounted on the hand grip and was free to rotate around it. This was a very clean and compact kite reel actually! Perhaps it would not be practical for the very biggest kites though.

Reel 5 contained a real mixture of wood and steel. Eight U-shaped pieces of steel were mounted around the perimeter of a wooden wheel, with large holes drilled in it to save weight. This composite reel was then mounted on a polished wooden pistol-grip. A small steel fitting fed the line out. All this was a bit bizarre really and not what you would call a thing of beauty!

Reel 6 was another cutout design. This time, a solid steel band rotated around the perimeter of the circular plate. On the band were mounted U-shaped pieces of steel, with two thin steel bars forming the two rims and connecting the U-shapes. OK, so a picture would be handy.

Reel 7 was a rather spidery-looking reel with 10 steel spokes and a garish green plastic grip. The grip, plus the steel feed-out bit looked a lot like one of those butane stove-lighters. There was no wheel in the middle, just the spokes attached to the axle housing. The U-shapes on the end of the spokes were quite small in this design.

Reel 8 looked similar to number 7 except for a curious knobbly hub with holes in it, made of the same plastic as the pistol-grip handle. The large U-shapes on the spokes were in several different colors for reasons known only to the manufacturer!

Reel 9 resembled a large spider! 12 steel spokes were mounted on a small metal disk, which in turn was attached via the axle to a slim polished-wood handle. Rather small U-shape steel pieces on the spokes hold the flying line in place. There was no reinforcement around the perimeter, just those spokes sticking out in all directions. It's different!

Reel 10 would have to be the most amazing, impressive piece of stainless-steel kiting overkill you might ever see. There it is below, complete with what looks like a disk brake like the ones on your car! When these kite reels were initially offered, they were asking for $600 each. Gulp. 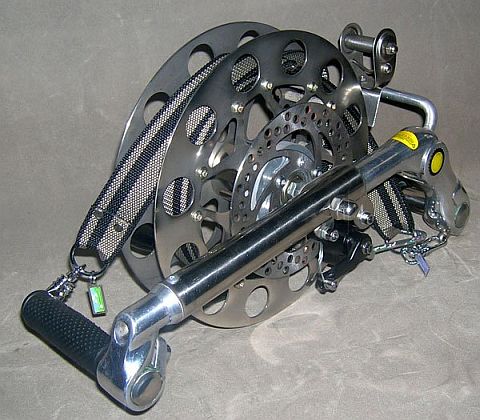 For the kite flyer who has everything