It seems that a small number of people have been kite racing on land for quite some time. Indeed, this became popular enough for manufacturers and designers to take notice and produce special racing traction kites. For example, there were the Ozone Yakuza and the PKD Combat. 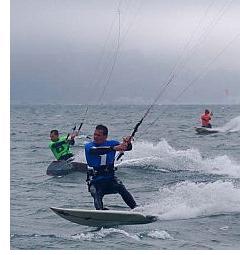 However, in 2005, a very significant new direction was taken in kiteboarding events.

Top riders from other countries also started to experiment with course racing. Many were looking for "somewhere else to go" after having been immersed in the freestyle kite-surfing scene for years.

Meanwhile, in the USA, the level of involvement and enthusiasm finally resulted in a national competition being organized in 2007. By this stage, many different approaches had been tried with regard to technique and also equipment. For example, there was hydrofoil-kite racing. Boards with a hydrofoil underneath were very quick upwind but proved slow in other directions. "Directional" board designs proved to be much more competitive than other types. Boards with too many fins were slower, and so on.

Since 2012, the IKA Formula Kite Class has officially been a World Sailing International class. The class has its own official website, maintained by the International Kiteboarding Association. That's the place to go for detailed event information, rankings, and so on.

When run close to shore over relatively short courses, foil-kite racing is a real spectator sport!

As the riders wait for the start, a gaggle of colorful water kites weave around above the waves as they jostle for position. Just as in a sailing race, the starter's gun goes off, and it's a race for the line.

As riders pick up speed, long white trails appear behind them as the boards carve through the water. If the conditions are challenging, the occasional rider might come off the board and hit the water while others skim past! The most skillful riders round the marker buoys closely, hardly dropping any speed as they smoothly make adjustments to the kite which is powering their progress.

Because of the boards' small size, kite surfing is actually faster than any other motorless watercraft in light and medium wind. That includes windsurfing boards! The riders try to fly the largest kite that they can handle in the conditions, in order to extract maximum pull from the kite and therefore maximum speed through the water.

This is a kite site after all, so here's a quick roundup of the type of kites that have been used in kite racing.

Generally, the so-called flat inflatables are the ones to beat, when riders use them to their full potential. These kites can be fully de-powered if necessary, which is good for safety. Apparently, speeds approaching 50 knots are not unknown!

Inflatable refers to the hollow leading-edge spar which is pumped up with air. This helps the kite keep its shape in the air and also prevents it from sinking if it happens to hit the water. Hence the term leading-edge inflatable (LEI) has been part of the kite-surfer's language almost since the sport started. Because of their shape in the air, these kites are also known as C kites. They can be relaunched from the water. 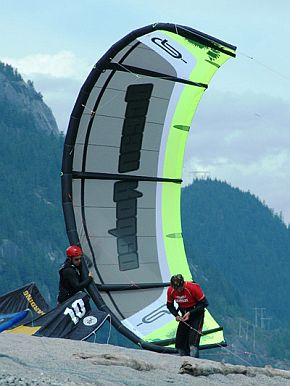 Any old LEI kite will get a rider around a race course, but of course manufacturers have always been under pressure to come up with faster and better kites. Hence, the first generation of "bow" kites made an appearance in 2005.

With less curve than the C kite, these became known as flat LEI kites. They had performance advantages over the standard LEI kite, but were more of a handful to operate, for a number of reasons.

The second generation of flat LEI kites in 2006 solved most of the bow kite's problems and in 2008 were the kite of choice for kite racing. They are called hybrid or supported-leading-edge (SLE) kites.

The bridle is more complex, with attachments at various points along the leading edge of the kite.

Here are some registered-series production kites that have been eligible for IKA racing since 2016 or later (in various sizes):

This is only an overview of kite racing for those who haven't come across this variation of kite boarding yet, so I'll leave it there! 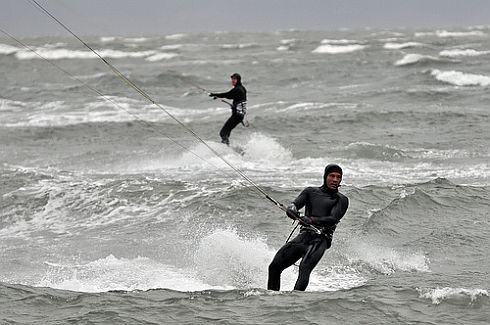