Kites, Boards, and Other Stuff

The requirements for kite landboarding are quite similar to those for snow-kiting. 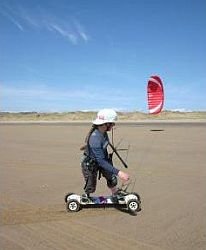 You want a steerable kite with decent pull, crash-proof in case it contacts the ground hard, and packable into a small space for traveling convenience.

Also desirable is the ability to relaunch off the ground without having to walk over to it and the ability to "de-power" the kite during strong gusts of wind.

And of course, the rider races along on a board. That's on wheels, rather than just planing along the surface as with snow or water.

Just like in other forms of traction kiting, it's a great idea to start by spending some time flying a small "trainer kite." This gets you familiar with steering and the changes in line tension in different weather conditions and where the kite is in its operating window. 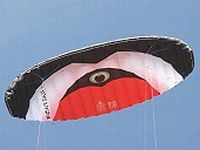 One kind of kite in particular is suitable for kite landboarding—the ram-air foil. It's no coincidence that these look like small paragliders, since the parafoil kite design came first! Full-size paragliders were later developed from the foil kite idea.

Foils are flexible, with an upper and lower surface when inflated. Openings at the front edge allow air in that pressurizes the kite and makes it behave like an aircraft wing. Most depowerable designs have four lines, which allow steering and also the "angle of attack" to the wind that controls power. Like many modern kites of all types, ripstop nylon is the most commonly used material.

At the beginner or intermediate level, most kites are sold as a complete package with lines, control bar, and a rucksack to carry everything around in. Add in a harness and the rider can wear it to take most of the kite's pull—no more tired arms.

For emergencies, some kites even have quick-release pins to let you get rid of the kite in a hurry.

Another approach to emergencies is to use a hook knife to slice through the lines. Some paraglider pilots have these handy too, for similar reasons.

For starting kite landboarding, just about any medium-sized depowerable traction kite will do. There's a wide range available, and not surprisingly perhaps, it's the paraglider manufacturers who make the best ones. They also happen to be the most expensive!

When deciding just how big a kite you want, here are the things that can affect your decision: 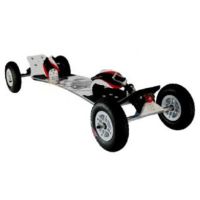 I won't get into huge detail about the boards used in kite landboarding, since this is a kite site after all!

Many kite boarders use "mountain boards," which are basically oversized skateboards. The wheels are pump-up rather than hard as on traditional roller skates.

These boards were originally designed for downhill racing and freestyle for when all the snow had disappeared from the slopes! That's because snowboarders decided there must be a way to get down the mountain fast, even with no snow. 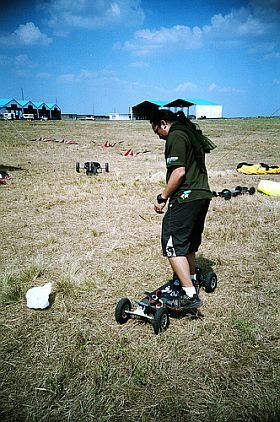 Hence the birth of mountain boarding, which also came to be known as dirt boarding or all-terrain boarding (ATB). So if you hear someone talking about their dirtboard or ATB you'll know what they are talking about.

Since so many people are into these sports, there are many manufacturers all trying to get a piece of the action. That means more different kite board designs than you can poke a stick at!

Even so, it's possible to make some very general statements about all these boards. Here's a few reasons to consider the most expensive boards, if you can afford them:

Boards for kite landboarding are a bit shorter than snowboards. A typical landboard is about 110 cm (43 inches) in length, with four wheels. The wheel diameter is usually between 18 cm and 33 cm (7 in. and 13 in.). An exception are the two-wheel in-line designs that have 51 cm (20 in.) spoked BMX wheels. There are even some three-wheeled designs out there.

Did I say all you need is a kite and a landboard? That's not quite true if you want a painless experience! Here are all the other bits of gear that complete the picture:

I hope all this has at least given you an idea of what kind of gear you need for kite landboarding!