Only Gets a Nibble Most of the Time!

Now, if you are after the kite eating tree immortalized in Peanuts, the comic strip, you will be disappointed. Sorry. Also, groupies who follow the band with the same name will also be disappointed. Again, sorry.

As for the remainder of this page, get yourself a coffee and read about all the close calls I have had with trees. While flying homemade kites of various kinds, of course. Over the last few years, I have actually written down a lot of our kite-flying experiences.

From time to time, a would-be kite eating tree would feature in the story! So, here are a few comments on some of those occasions, together with a quote from the original flight report.

Close Calls With
The Dowel Kites

The biggest kites we have made so far are constructed from lengths of dowel for the spars and plastic sheet (from garden bags) for the sails. Sounds pretty homey and crude, but these kites actually look fine and fly even better!

Dowel Diamond. Strangely, despite the frail plastic sails, damage rarely occurs when a kite drifts gently into a kite eating tree. Leaves and small twigs make for a soft entry, and don't resist much when you pull. This time, there was a tiny bit of damage:

"The method for tying the spars where they cross has also been redesigned, since it kept coming loose in flight. Quite spectacular really, whenever it happened! All of a sudden, the kite would dive for the ground, sail fluttering, with the bow line touching the vertical spar. This actually caused a tree landing on the kite's most recent flight, but we managed to extricate it with only minor damage to the sail near the nose..."

Dowel Delta. Deltas can be fine one moment, and get a mind of their own the next, if affected by strong thermal gusts. But on this occasion, a shoelace tie had come loose, leading to this heart-stopping descent which narrowly avoided a kite eating tree or two:

"All of a sudden, one side of the kite was sporting a 1/2 meter (1 1/2 foot) length of spreader that had slid through. Instead of looping crazily, the Dowel Delta kite actually carried on flying for a while. However, I had to get it down safely before it became uncontrollable. It did start to loop a few times, but would still fly fairly straight with the right amount of tension on the line. In this semi-controlled state, I just managed to get it to ground without draping the line over any trees. Phew! Only made it by a few meters."

Dowel Dopero. One day I was out flying the big Dopero, and the wind was a lot fresher than it was comfortable with. Result—another white-knuckle descent!

"Eventually, all this air pressure took its toll, and a tape spar cap was pulled loose. With maybe 10 or 15% of the sail area gone on one side, the poor kite heaved over to the right, and commenced a continuous loop. There was a kite eating tree directly under the kite, so I desperately headed upwind to gain more room.

With the Dowel Dopero kite now down to under 100 feet, I also noticed trees to either side! No chance to reel in quickly enough, so I scooted sideways to bring the kite down between the trees.

Finally, the last loop was obviously going to meet the ground. With the kite still a couple of meters from impact, I thrust the winder at it, to lose all the tension in the line. At this point, the kite disappeared over a small rise and came to rest."

Close Calls With
The Skewer Kites

We make skewer kites in a couple of sizes. Yes, ordinary bamboo BBQ skewers make great spar material for small kites! Here are a few more exciting brushes with a kite-eating tree; well, it was definitely exciting at the time!

2-Skewer Sled. We went out one day, in a brisk breeze and with massive cumulus clouds all around. My wife was flying the Tiny Tots Diamond (!) while I had the "real kite"—a sled that was twice as tall, with around four times the sail area:

"Embarrassingly, the sled had more trouble handling the wind than the Tiny Tots Diamond, looping to the right from time to time! It went all the way to the ground a couple of times, but I managed to relaunch off the grass. One time I even relaunched from the top of a tree—oops! The kite needed some extra length on its left tail."

2-Skewer Diamond. Backyard flying is a bit of an art form, requiring concentration and quick reactions when the kite wanders. But it's a lot of fun! Maybe it's the risk, the danger; a kite eating tree is never far away when it's in your own backyard!

"The orange diamond had at least a couple of flights of several minutes each, out of our side lawn. That's an area about 4 by 10 meters (13 by 33 feet). Our roof gutter was on one side, a row of rose bushes down the other and a peach tree right at the far end! No problem? ... Well, the tail did snag for a moment on the top of the peach tree, but the kite pulled and freed itself. Also, there was a close call when a sudden wind shift took the kite over the neighbor's roof—and then it looped!"

2-Skewer Delta. When you spend quite a bit of time on doing a nice neat job, you just don't need to see it get stuck in a kite eating tree:

"Quickly, I had more than 100 meters of line out and the delta was doing fine, although showing signs of being near the top of its wind range. Yep, the breeze was rather fresh up there, around 70 to 80 meters above ground! The delta pulled very firmly on the 20 pound nylon line and finally started to lean way over to the right. Mmmm, those trees could be a bit close ... ummm kite diving  ... better ... pull in line ... RIGHT NOW pulling, pulling ... ooops too late! At least I started pulling in early enough so that the kite flew into the upwind side of the tree.

OK, what's done is done. I tugged at the line to see if the kite would just pop out. Nope. Reeling in most of the line, I approached the tree and tried another angle. The kite slipped down, and it was clear the line was around a single small twig. I pulled hard, expecting to break something, but thankfully the twig snapped and the kite floated down in one piece!

Soon the delta was in the air again, and I backed off right into the far corner of the field to avoid a repeat performance."

1-Skewer Sled. This was quite a while back, so the memory is hazy. The interesting thing about this one is although the kite eating tree managed to make the snatch, the kite never actually stopped flying!

"Handing Sled Number 1 over to my wife May for a while, I had another go with number 2. This time it was with some success. Unfortunately, I was distracted for a while as Aren was causing problems. Aren's not quite 2 years old. I looked back to see my kite brush a tall tree on the other side of the reserve. One tail got stuck on a branch, while the kite did its best to continue flying in various positions around the tree! Surprisingly, it eventually came free and kept on flying."

1-Skewer Diamonds. Yes, more than one diamond! We had two of them flying on a single line, in a train. This is an interesting one, since one kite actually helped the other to escape a kite eating tree:

"With such small kites on nearly 90 meters (300 feet) of line, there was bound to be a little excitement from time to time. I'm talking about those trees lurking in wait around the reserve perimeter! Number 2 had a near miss with one such tree. However, 1-Skewer Diamond kite number 1 helped me to pull it free through some small twigs! Phew."

1-Skewer Delta. This is about as close as it gets. There was no damage fortunately. Can you believe I used the word "tree" no less than six times in the following paragraph:

"At one stage, the little delta kite got snagged on a tree when it flew way off to the side. I made the wrong snap decision. By releasing all tension in the line, the kite would have recovered for just long enough for me to run to one side and fly it away from the tree. Instead, I tried to pull in line to get the kite in front of the tree, whereupon it dived into the leaves on the downwind side of the tree! I managed to pull the kite away, with the line still threaded through the tree. Eventually, the kite managed to free itself by flying the line out of the top of the tree. Whew!"

1-Skewer Roller. This relates to the original one we did in clear plastic. A quick test fly in the backyard is often handy, to ensure a new kite is basically stable before going out further afield to fly it much higher. On this occasion, I was tempted to push the limits:

"There were a few lulls where the kite had to be reeled in quickly. That was to avoid losing it in someone else's property, or in the rose bushes, or the TV aerial. In the end, it did snag on a tree. No drama ensued however, since the tree was a small one in our spare driveway, and I managed to pull the kite free. Not wanting to take any more chances, I went inside, very happy that the roller really rocks!"

Our First Kite
And a Kite Eating Tree

Baby Sled. This was the very first kite that featured in this website. We bought it for little Aren, at the Adelaide International Kite Festival. We haven't flown it for a long time now, but it's still out there in the shed:

"Walking backward, I headed for a gap in the trees on the upwind side of the reserve. Meanwhile, there were numerous close calls with the trees on the far side of the reserve! I actually laid the line across a shorter tree at one point, but eventually managed to fly the kite off it again. A few times, the long center tail would drape itself against the leaves of a taller tree, before I backed away and got the kite airborne again. This is called flying the local reserve on the very longest line possible!"

Here are just a few points on keeping kites and trees away from each other, boiled down from all the flight reports:

If you have read this far down the page, all I can say is ... you must be a real hard-core MBK fan! ;-) Your reward is the great photo of a kite eating tree, below: 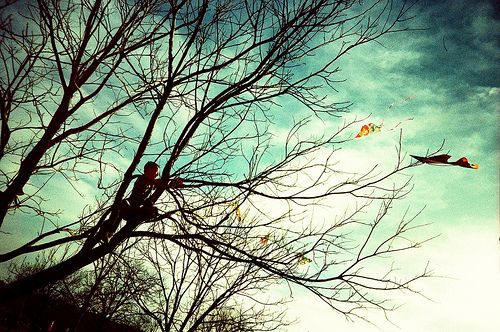