For many years, maybe decades, people around the world have known about Japanese fish kites. The traditional term is koinobori (鯉のぼり) which literally means carp streamer. Another term sometimes used is satsuki-nobori (皐のぼり). 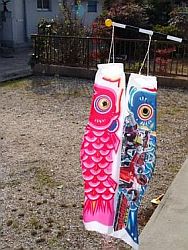 From a kiting perspective, these brightly colored shimmering tubes are closer to being windsocks. However, since these are such a major part of Japanese kite culture I thought they still deserved a page on this site.

Being lightweight, open at one end and closed at the other is pretty close to being a windsock. Aviation windsocks are generally open at both ends, but taper down to a much smaller outlet size than the inlet.

Widely available online, some sets of these "kites" are very glossy and vibrantly colorful. The color can fade after a while, but it all depends on how you treat them and how long they spend in the sun!

Near the bottom of this page is a great image plus a link to some others that have been carefully collated.

Perhaps these colorful decorations have not caught on in a big way here in South Australia, since I have not spotted any at the annual kite festival. Traditional rokkakus yes, on one occasion, but no "fish kites" have made an appearance!

In Japan, May 5th each year is a time of celebration for children. Funnily enough it’s called Children’s Day!

It used to be for boys only, but Japan has moved with the times so that both boys and girls can enjoy the day now.

On this day, fish kites and streamers are hung from bamboo poles outside people's homes, representing the male occupants. In fact, this goes for poles everywhere around the country and even from the occasional car aerial! As the wind blows into the mouth of the windsock, the kite wriggles around giving the impression of a fish swimming upstream.

Traditionally, it is the freshwater carp that is depicted by the kites. The upstream struggle of the fish represented the passage of a boy through to manhood. According to legend, when the carp reached the river source, it became a dragon.

Hence, these creations are also known widely as carp kites. For the sake of correctness, let's call them carp windsocks!

The great photo below shows some pristine and very glossy-looking Japanese fish kites, err sorry, carp windsocks. The traditional colors of red and blue are also present, on the far right. 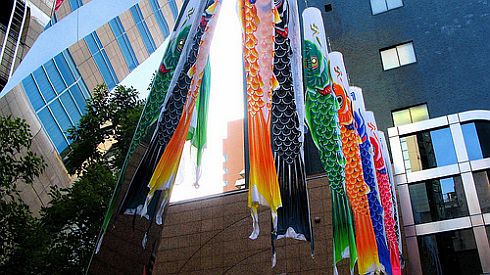 Also, for a little more variety, check out this Pinterest board on Japanese fish kites.