Yes, I had to check the spelling of shenanigans. Before they began in earnest, I made a start indoors. 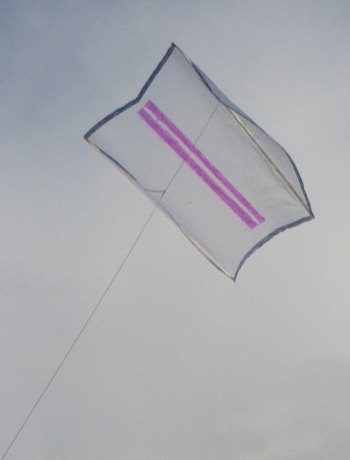 With a little practice it was possible to tow the Indoor Sled kite from a bedroom into a hallway and from there through the living room and into the kitchen. Once that was mastered, I tried the reverse order. This proved just as tricky, due to a couple of slow points where the direction of flight changed. A little finesse with changing the length of thread helped. Shorten up for the tricky bits and then let an extra meter or so slip out while in the more spacious parts of the house. Dodge the light fitting on the way.

Trees are the bane of outdoor flying and it seems light fittings fill that role indoors! Not to mention doorways and arches.

There was a breeze outdoors which seemed more than light at times. However, the sun was shining and this sled design has proven to be quite tolerant of high tow speeds or gusts of moving air. Even when pushed past its flying limits, the little sled just folds up momentarily which seems to protect it from excessive stress. So it was out to the side lawn, on an extra couple of meters of thread.

It wasn't too hard to get the kite up for brief flights. Occasional 180-degree wind shifts low over the grass didn't help though! Once over gutter height the airflow smoothed out a lot but still proved too strong for much of the time—as expected when flying an indoor kite outdoors of course. But like I said, the Indoor Sled kite is a glutton for punishment and it persisted through multiple collapses during each flight. The sail often ended up inside out, so some time was spent correcting that before relaunching.

Talking about persistence, getting the camera out and framing up for photos mid-flight was a challenge. The flights were only 5 or 15 seconds long! But several decent shots were taken as the sled sailed high above the gutters of our carport and sometimes right over the roof.

It was a marvel really, feeling the almost imperceptible tension in the thread and watching the impossibly frail contraption straining away all pumped up. And at some amazing line angles. Only to accelerate wildly away before collapsing into a mess with a distinct rustling noise. Then with a gentle jiggle or two, the thing would suddenly reinflate and climb away—with spars intact, somehow!

Some video footage was taken, to be duly posted online. A local cat did a cameo appearance in at least one of the takes. The furred kind, not a jazz musician ;-)

Future kites in this Indoor Series will be photographed in various large indoor locations. But there is still the possibility of occasional late-afternoon outdoor flights after the breeze has totally "glassed off." Perhaps even some night flights in still air, illuminated by a full moon.

Click or tap on the photo below to see it in hi-res: 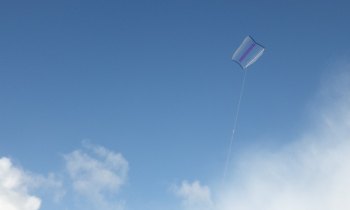 Fast and furious in light wind