The latest plain prototype had proved itself. So I went ahead and did the "pretty" one, taking photos at every stage to illustrate the online building instructions. 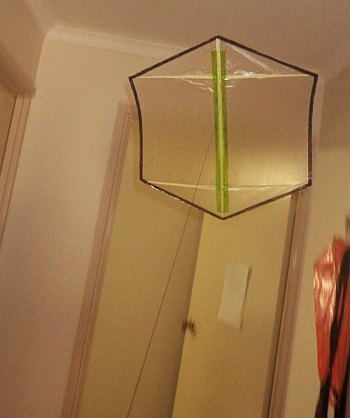 A few swishes around the house confirmed that the decorated kite flew, although its stability seemed less than ideal. A short foray out to the verandah and carport was also attempted. However, puffs of breeze encroached and soon proved too much for the kite. Bother! There goes the vertical spar again! A couple of strips of sticky tape soon fixed that. That fix is also documented in the instructions :-)

Back inside again, a little experimenting found a way to improve the stability. By creasing the ends of the vertical spar sharper than the middle section, the overall shape came closer to the spine curve that a rokkaku needs in flight. Sure enough, the Indoor Rok did better around the house. Tiny tweaks can make such a difference with tiny kites.

Of course, creases fall out after a while, so the next step is to experiment with holding the fix in, with a small amount of tape at the tail end of the kite. I'm not inclined to add any weight at all to the nose end, so no extra tape will go there. This was a lesson learned long ago, which applies to just about any kite.

It would also be good to find a better place to get some higher flights with this kite. When not in use, large covered car-parks are a possibility. These places might contain long areas of dead air, shielded from the breeze outside.

Oh yes, the little Indoor Rokkaku has a designed redline speed of 6 kph ;-) And it was tested last night:

Having done another build to implement a small design change and also to check the build time required, I headed outside. It was way after sundown, but light from the house was sufficient to see what I was doing.

Also to be tested was that redline speed. On not much more than a meter of thread, the freshly made craft floated behind and above as I walked around one corner of the house. This was an L-shape course covering the back and side lawns.

With my Windtronic meter held high in one hand while I flew with the other, I was interested in the maximum gust-strength reading :-) Accordingly, I gradually built up speed. The last several meters were covered at a brisk walk. A glance above me confirmed that the rok was behaving and undamaged.

If anything, the craft had flattened out somewhat, as it cruised along with "pedal to the metal." This is a handy characteristic of kites with a single-leg bridle. Up to a point, they self-adjust to high wind-speeds. The ultimate example of this are those kites which are attached at the nose! This is a relatively modern Japanese invention.

Stepping inside, a look at the wind meter showed a maximum of ... 6 kph precisely! So that'll do. Stay tuned for the step-by-step online instructions in a week or two.

Getting the vertical spar right is critical for small rokkaku kites that can't bend. The simple rectangular spar that almost worked for the first Indoor Rokkaku has been replaced with a six-sided version which did a little better in flight. Only a little? Well, when the fold angle flattened out a bit, the dihedral fore-and-aft was tiny indeed. The result was hardly different from the rectangle! On the plus side, the shape did have much more strength near the towing point. So that was something, at least.

Hence the spar was replaced again. This time it was with a more pronounced difference between the middle and end widths of the spar, but having the same total area. Adding weight was not an option.

Again, the dihedral was pretty subtle. But this time, the kite flew well. Even the duration test checked out: nine seconds of air time through the living room :-) Anything less than that would demand a return to the drawing board.

A minor problem still existed; when pulled faster than 4 kph or so, the kite tended to flatten out, almost to the point of diving.

After this, some experimentation was done with a new idea for constructing the vertical spar. Without going into details, I discovered a way to get the folded and taped spar to remain at less than 90 degrees of fold angle—without bracing. As an added bonus, the fold line actually curved upward in the required direction!

So now a new prototype will be made, using this new method. The old plastic sail is a bit worse for wear after all the re-fits.

The rok is a logical place to go after designing a diamond for indoor use.

Apart from adding another set of horizontal spars, the Indoor Rokkaku came together very much like the diamond. Folded quadrilaterals of paper and tape are taped against the rear of the plastic sail. For simplicity, this first attempt used a simple rectangular shape for the vertical spar, like the Indoor Sled and Indoor Diamond.

Would the spar be strong enough was the question, even though the rectangle's width was adjusted to take account of the much greater sail area. Stability was also unknown since larger roks assume a curved vertical spar in normal flight.

All the indoor kites in this series will be limited to 40 cm of height, in order to fit inside large-freezer-bag dimensions. That's not to mention the size of the carry box! It was decided to reduce the wingspan of the rok somewhat, since the traditional shape has a lower aspect ratio than most diamonds. Due to its shape, there would still be ample sail area to achieve low-speed performance.

So, a simple rokkaku was quickly put together and flown around inside our house. With the straight vertical spar, the little kite was however very reluctant to nose up into flight. This was until the towing point was moved well below the upper horizontal-spar crossing point.

But the main problem was something that also affected the biggest rokkaku I have ever made—a tendency to nose down and glide forwards on a slack line. So, just like my Paper Series Rokkaku, some dihedral is going to have to be built into the vertical spar! This has the same effect as the curved spine of a traditional rok.

Hence the next step will be to refit the rok with a six-sided main spar. When folded down the middle, the required dihedral will appear. Handily, the spar will also be much stronger near the towing point and lighter at nose and tail. Perfect!