These indoor kite posts once appeared in the site blog page - that's the one you enter via the 'what's new!' site navigation link. The latest posts come first. Just scroll down and stop at any heading that appeals :-)

I've never flown a small kite indoors that goes as steep as this one... 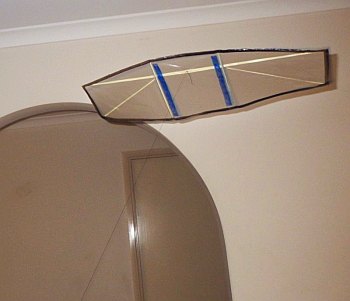 It's quite fitting really. Despite being a relatively easy build, this last design is the most efficient of the whole Indoor Series. It's also appropriate that the trickiest-to-fly design sits at the end of the series. Not that this Genki is a real dog in the air by any means. It just requires careful attention and a light touch to get the most out of it.

The first thing I did was to take 4 in-flight photos while towing the kite along our tiny corridor. As the kite rose straight up from the floor I snapped it on it's way up to the ceiling. The climbs were quite smooth and stable I might add! It can just get tricky going around corners.

A few duration runs were done too. No surprises there - the kite passed with flying colors! The thought of doing a fast run was cause for apprehension... However, the kite just sat high and sailed along with little strain, clocking a maximum of 6.6kph. I wouldn't try 6kph while that long wing was down in the 'power zone' though.

Finally a few passes were done through the living-room with flying hand low and the kite on a good 1.5 meters (5 feet) of thread. That's when that amazing 60 - 70 degree flying angle was most apparent!

Stand by for the free online instructions as I get busy on the final build of this design...

This first prototype had almost identical proportions as a standard full-size Genki, so I didn't hold out much hope that it would fly successfully...

Well, it did! Mind you, it was quite demanding to fly steadily. The kite was prone to slipping this way and that if you let it wander at all. If it got too far out of station it would do a lot of flying on one wingtip. Sailing sideways and straining to get back on an even keel. But on the other hand... It was possible to climb from floor to ceiling in one smooth swoop if you kept the towing speed just right! Amazing.

The flying angle of the thread was eye-popping too - this kite might out-do the delta and canard in that department :-)
For the second prototype I will be extending the chord (distance from leading edge to trailing edge) by 20% and leaving the spar widths as is. This should shift the center of gravity back a touch and also accentuate the stabilizing effect of the battened portions of the wing. And of course the wing loading will go down by close to 20%. Overall lightness is also good for a kite's stability, all other things being equal.

Stand by - it won't be long before Genki #2 gets into the air.

The story or stories above document actual flying experiences. My write-ups are definitely warts-and-all since things don't always go totally as planned. However, half the fun of kiting is anticipating the perfect flight. When it happens, it's magic!

The Big MBK E-book Bundle is a collection of downloads —printable PDF files which provide step-by-step instructions for many kites large and small.