Yep, this morning I made it into the indoor-kite-flying arena of the local shopping center ;-) 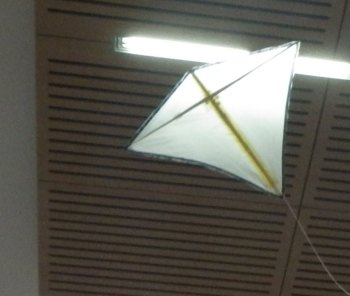 As expected, due to the timing, very few people were around. A guy followed me in but then headed in a different direction. While setting up the camera, a school kid walked past. And then, during the single 3-minute flight, another school kid walked through, taking little notice of the old guy flying a kite :-)

The whole exercise went pretty much as planned. First, the camera on a mini-tripod was set in place on a bench seat. The camera was aimed up slightly to catch the Indoor Diamond kite as it approached. On pressing the shutter, a 1-minute interval started to count down as I launched the kite and began walking in a circuit. After that, a frame was taken every ten seconds, so one or two shots would occur as I turned and approached on each lap.

The location had a much higher ceiling than elsewhere in the walkways of the building. The floor area was perhaps 12 x 15 paces. With about 4 meters (15 feet) of polyester thread out, the kite flew well but got nowhere near the ceiling. I didn't want to leave the kite too far from the camera for a clear image.

Also, as partly expected, there were winds aloft ;-) In one direction, the air conditioning would catch the kite and boost it up to a good 45-degree angle as I walked along slowly.

After the final image was taken, it was straightforward to slip the kite into its cardboard carry case and wind the thread around the case before exiting the building.

Back home, the images turned out to be fairly dismal. Next time, I'll be using a higher ISO (film speed) setting, and flying the kite on a much shorter line—at least until the photos are taken.

Number 4 was put together in 1 hour and 20 minutes. To save time, no decoration was done on the sail.

From the first 5 seconds of flight, I knew this design had "hit the spot." The feather-light craft floated up with ease and brushed the ceiling when I took a step or two a bit too quickly. That was more like it! The extra weight of a slightly wider vertical spar was of no consequence, since it stayed rigid in flight. As insurance, I had also shifted the towing point 1 cm toward the nose. Hence there was no hint of straining as the kite sat back and lifted.

Earlier today, I checked out a possible venue for higher indoor flying. It will mean arriving around the time the shopkeepers and workers are preparing for their day. That's about half an hour before the customers arrive at the shopping center! It might be possible to get in a good 15 minutes of uninterrupted flying, with the camera (on its tripod) taking shots at 10-second intervals.

We'll see how it goes!

Number 2 had flown quite well, but I felt it was still somewhat overweight.

So, most of the dimensions were decreased for number 3. Surprising though, it didn't climb as high as the older version! On the plus side, the slightly longer cross-member did a good job of protecting the horizontal spars from overstressing.

The main issue with the current kite was that the vertical spar would assume a pronounced bend under the air pressure of normal flight. Diamonds don't take kindly to this, since it has a similar effect to shifting the towing point aft. If that point is already at the optimum position, going aft just increases drag forces and makes the kite bog down. Not only that, but the leading edge sits up more, acting like an air brake with air spilling over and tumbling down the back with more turbulence than normal. Of course, you can shift the towing point forward to compensate, but then the kite still has a weak vertical spar which can result in fish-tailing instead of flying high.

The kite wasn't getting much above 35 degrees of line angle, so some backtracking will need to be done.

I'll still shave a little bit of spar size off the number 2 spec for number 4, but won't be nearly as enthusiastic about it this time! Hopefully, the resulting kite design will be publishable.

Barely a leaf was moving out in the yard, just after sunset yesterday.

So, I thought, why not try the Indoor Diamond on about 3 meters (10 feet) of thread. It soon proved possible to loft the kite at one end of the back lawn and tow it all the way around to the side lawn. I haven't done that before with any kite, although it certainly would be possible with the better light-wind designs.

The trickiest part of this backyard towing was making it through the gap between Hills Hoist clothesline and the house corner. And that was just before guiding the feather-light kite over the top of the gutters at that corner!

The two-lawn tow was done several more times. It was kind of addictive in fact :-) Later, I managed to do a 180 on the side lawn and come back round the house corner again, while keeping the kite off the grass.

Meanwhile, the moon gleamed ever brighter in the darkening and almost featureless sky.

Coming back onto the rear lawn and climbing to maximum height, the kite encountered a ferocious headwind. OK, perhaps all of 2 kph ;-) On another pass, an accidental jerk on the thread caused a horizontal spar to fail. Down spun the kite in a hurry, like a wounded bird. However, a pinch of the folded-paper spar soon had the craft airworthy again.

If a spar had failed like that on a Paper Series kite, it would likely be the end. But these indoor designs seem much more tolerant of such damage. You can pinch-and-fly many times over.

It was a productive couple of hours, making up a second plastic-and-paper diamond kite. Without giving away too many details, dimensions were shaved, stretched, and shifted to produce a kite that flies slower. The new design brushed the ceiling while being pulled at 3.1 kph! That was more like it :-)

The vertical spar, which is now just a V-bend instead of a tube, might be able to stand another millimeter off its width. I dare go no further!

And of course, by going with a single-piece sail, the sticky tape right down the center can be eliminated as well. That kind of weight does matter, when flying small kites indoors!

While being a truly fiddly build, the reward is an almost magical ability to float from room to room on 2 meters (7 feet) of polyester thread. In larger areas, walking a touch more briskly floats the kite right up to the ceiling.

Another entertaining exercise is walking in a small circle with flying hand outstretched to the outside of the turn. This way, the kite is flying a circular route at about 1.5 meters (5 feet) radius. The trick is to start on just a few cm of line length and then let it slip out to a meter (3 feet) or so. Most of the time, the kite was managing almost 45 degrees of line angle while doing this. Doing much larger circles would be a very easy way to get longer flights in, say, an almost empty shopping center or indoor mall.

Well, I got a prototype to fly, but there will be changes.

The initial idea was to create a series of very-slow-flying kites where the sail outline would fit inside four sheets of A4 or Letter-size paper. This would enable a bit of fun in quite small spaces. And even more fun could be had in large indoor spaces!

In true MBK style, no space-age materials will be required. Just the thinnest possible plastic sheet, copier paper, and sticky tape will be used. Does that sound familiar? Apart from the sails, these kites will have some similarities to the Paper Series kites. But of course the total weight will be much less.

So, yesterday I made up a 44 cm x 40 cm diamond-shape sail from medium-size freezer bags. It might have been possible to get the entire sail done from a single large-size bag, but that will have to wait until the next shopping trip.
The vertical spar was a triangular tube folded from paper which had sticky tape on both sides. Lamination! Boeing likes the idea and so do I, although with much cheaper materials than carbon fiber ;-)

The horizontal spars were V-section strips with tape on just one side for now. Finally, a cross-member held in the dihedral angle. An initial pull-up in the living room promptly caused a failure right next to the end of the cross-member. Solution? I'll just make it longer! The kite flew OK after that, even remaining airborne as I walked it around a 1.5 m (5 ft.) radius circle. But...

There's a problem. By indoor standards, this design is still way too heavy, requiring about 4.8 kph to rise past a 30-degree line angle. Tut tut tut, tsk tsk tsk :-) The aim is for more like 3 kph or a little less. It's going to be a challenge, with a number of sneaky tweaks required. So it's back to the drawing board as they say.

(It's handy how a good wind-meter can record your walking speed! The "gust strength" is the relevant number, indoors.)