It's done. The final Indoor Canard, complete with black border and aqua-blue stripes, has flown.

Going out to the veranda for the in-flight photo has yet to be done. Being an open space, flying under our veranda is weather dependent though. 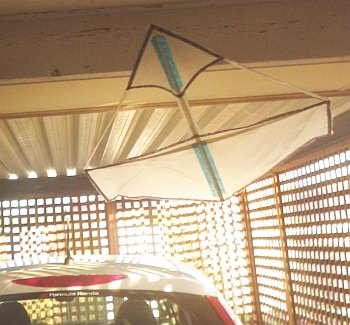 In the meantime, the kite has proved itself indoors. I refer to the usual living room capers!

This build differed only slightly in a few dimensions from the previous prototype. However, the towing point position was affected somewhat. The feather-light kite sat right back but refused to climb on the first couple of attempts to launch. So, the towing point was shifted 1 cm (3/8 in.) forward before the next flight. That amount seemed just right since the clear-plastic-and-paper craft headed straight for the ceiling.

An error in cutting out the sail for the previous prototype had meant some extra sticky tape was used on the upper sail. This had to be balanced out by several strips of tape along the trailing edge of the lower sail. That's more weight! So, the next build was lighter for two reasons: no unnecessary tape, plus those spar-width shavings here and there. There were no changes to the planform or spacing of the upper and lower sails.

A few duration flights over my standard distance confirmed that the new kite was flying slower than the old one. Good! The slower the better it is for indoors.

A few whisks around the house on a short line also confirmed that 6 kph was safe. Nothing failed :-) On the test, the speed actually peaked at 6.3 kph. Oh, in case you're wondering—my towing hand was also holding an anemometer.

In poor weather, it's great being able to test a change without leaving the house.

Looking at prototype #2 of the MBK Indoor Canard just sitting there on my desktop, it struck me that there was another way to trim off some weight. By removing a section of the vertical spar, the kite would be significantly lighter and stronger. Specifically, there would be less tendency for the vertical spar to bend at the towing point, as the upper and lower sails took the strain of flight.

So, if the kite is stronger and lighter—why not? Well, there would also be a reduction in directional stability, since the overall aspect ratio of the design would increase. That's OK for a whopping great outdoor kite, but this was a tiny indoor design.

With some trepidation, I flew the altered kite around the house. And indeed, at its slowest possible flying speed, the little canard did struggle to stay straight. There was more than a little bobbing to the left and right when flying at a low line-angle.

However, with just a kph or two of extra towing speed, all was well and the kite followed me around with the nose swinging left or right to follow any changes in towing direction. Line angles were close to 45 degrees.

On a bit more thread, the nose dragged lightly across the ceiling in a most satisfying manner :-)

And as the "icing on the cake," a final duration test came out at around 8.5 seconds. That's so close to the magic nine seconds now.

The planned changes for slimming down the various pieces of the frame will still be done on the next build. It's less risky now that the vertical spar is shorter and lighter.

Prototype #2 flew around the house this afternoon, not caring about the constant rain and wind outside.

First, a few duration flights were done to check the effect of all the weight trimming. I had ended up being a little more cautious than first planned, not wanting to create an overly weakened kite. Sure enough, the kite still didn't want to stay up any more than about 8 seconds. 9 seconds is the mark to hit. How slow can you go.

Although still a touch weighty, the flying characteristics of the flimsy canard were simply great. Just like the Indoor Delta, this canard follows you around on a short line, pointing like a weathercock through every turn. A tendency to nose over into a shallow dive was corrected with some sticky tape along the rear trailing edge. *Gasp* tail weight! Tsk tsk.

After enjoying some general flying, with the occasional nose stab into the living room light fitting ("tok!") it was time to check out structural strength at high speed. That's right, stressing the kite right out by exceeding the 6 kph redline :-) By holding the wind meter in the same hand that gripped the thread, I was eventually able to get a gust strength reading of 6.1 kph, around the living room. No damage was apparent by looking at the kite, but just to be sure I flew it around a bit more. All seemed OK, with no undue bending or buckling.

So, a bit more dieting will be necessary to get the little Indoor Canard floating about at the leisurely walking pace required. It'll be achieved by shaving off a millimeter here, a millimeter there.

Prototype #1 is on the heavy side, you see.

Yesterday evening I completed the first build of the Indoor Canard. In case you're not aware, a canard craft has a small wing at the front and the main lifting surface at the rear.

The first prototype of anything at MBK is usually too heavy. This gives an opportunity to at least see the kite fly with no structural failure. Then it's just a matter of deciding how much weight to shave off, and where, for the next build.

Flying the canard—my first ever—was a pleasant surprise. After shifting the towing point rearward in three steps, the kite finally rose up and flew beautifully stable. The duration test revealed how overweight it was, however. The kite could only manage 6 or 7 seconds in the air over the standard short course, which requires 9 seconds for a "pass."

After a little thought, the towing point was moved back yet another centimeter and some sticky-tape tail weight was added to the rear trailing edge. These changes resulted in durations around 7 to 7 1/2 seconds. That was better, but still not enough!

So, except for the skinny little battens along each squared-off wingtip, every spar piece will be remade a few mm slimmer. The critical test will be to see if the slimmed-down version survives the 6 kph redline tow :-) If not, 1 mm will be added back in to the relevant spar(s).