As it turned out, the MBK Indoor Bird wasn't the only one to use the airspace around our house. 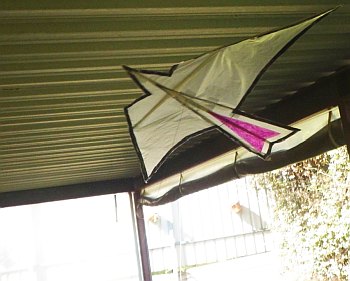 As a precursor to today's flights by the final and decorated Indoor Bird, a real one got chased into our garage by the approaching nose of our car! The small creature had to flap round a corner to find its way out at the far end. It went right into the airspace I use to get most of the in-flight shots of newly completed indoor kites.

Although it's an open veranda, the roof and poles give an indoor feel. It also allows more light for photography and a bit more space for towing.

Firstly, a little flying was done inside the house to double-check the towing-point position. The clear-plastic bird soared straight up and flew along at a decent angle, near the ceiling. All good! Then it was time to go outside to take some inflight photos.

Today was a little tricky since a significant amount of wind was blowing around our property. The moment for flight had to be judged carefully to avoid getting the flimsy craft flung all about—not to mention overstressing the frame.

Several brief tow-ups were done, as I walked backward up and back under the veranda roof. Thread was in one hand and camera in the other, with focus fixed at about 1.2 meters (4 feet).

Of the eight or so photos taken, just two stood out as being usable. With a bit of a crop and resize, you can see the result on the How To page for making the MBK Indoor Bird kite. That's under the Kite Making | Indoor Kites menu item on the website.

After all that, it was back to the living room for a bit more flying, just to enjoy the fruits of my labors.

... the all-important flight tests of course.

Since prototype #1 failed the duration test miserably, #2 has been designed and constructed with a couple of centimeters extra, all around the perimeter of the bird shape. This equated to a good 20% or so of extra area, which has certainly helped the duration score.

However, it didn't take a lot of flying around indoors to discover that the spreader strength was underdone.

Trying to save weight by lightening the spreader was not such a good idea after all, particularly since there was now more sail area. First it failed in the middle, during a routine pull-up. After a quick patch-up with tape, it failed off to one side on another flight! So it was back to the drawing board. I ended up adding 1 millimeter to the tip width and 4 millimeters to the width across the middle.

The towing point had been successfully established before the original spreader failed. Now, with a decent stiff spreader, the Indoor Bird was a delight to fly. I could only get eight seconds out of it over the duration course, though. Due to the nature of the design and the constraints of using paper and tape, that might have to do.

Out on the open veranda with almost calm conditions outdoors, the kite sped along at a peak speed of 7.1 kph with no dramas. So that's the strength aspect sorted :-)

Next, it was taken out over the wet grass of the back lawn. I let the thread out to almost a couple of meters (7 feet) and towed the clear-plastic bird kite around the corner of the house and back. Beautiful! At one point, the thread definitely exceeded 45 degrees from horizontal, so that proves the efficiency is good enough.

Back inside again, I walked around in a small circle with my flying arm extended outward, to check the kite's behavior on a short line. There were no problems there. It stayed airborne obediently, for two complete circuits.

So it's time to commit to doing the free online instructions for the MBK Indoor Bird. What it lacks in slow speed performance it will make up for in sheer good looks, I think!

Being the first prototype and looking a tad heavy, I thought maybe it would be closer to a brick than a bird, in flight. However, I was pleasantly surprised!

Not only did the kite climb away on tow, but it flew very stable as well. The initial towing point was a total guess, but it seemed spot on as the kite soared up past a 45 degree line angle—up where it could peck at light fittings and brick archways ;-)

Some walking around in circles in the living room yielded good results too. The kite obediently followed around on a meter (3 feet) or so of thread.

Finally, I couldn't resist some room-to-room excursions to test the kite over long-haul routes :-)

But, but, but... It was not a surprise to find that the graceful small bird didn't make the grade over the duration test course. Time in the air was under 7 seconds tsk tsk tsk. The design will require significantly more sail area and a little shaving of spar widths to make the required 9 seconds duration. This test ensures that the kite will fly indoors at a comfortably slow speed.

The high speed (6 kph!) strength test can wait until prototype #2 is ready to go.