With the Indoor A-Frame instructions completed and decoration applied, the kite was ready for its in-flight camera shoot. 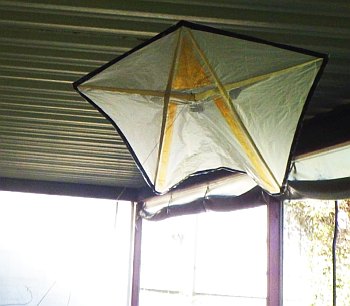 First of all, there was a problem to sort out. Somehow, I managed to end up with considerably less dihedral in the horizontal spar than the previous prototype. Would it fly OK with just 20 degrees instead of 30? It only took a couple of short tows around the living room to answer that question. Ooops! The kite flew with an excessive amount of tail swishing. That just would not do.

It was a delicate operation, but after a few minutes I managed to increase the dihedral. The spar was loosened from the sail in the middle and some snips made with the scissors. Then tape was reapplied to hold in the correct amount of dihedral. A short tow up then resulted in steady flight up near the ceiling. Whew! No time was wasted getting out to the veranda, to take photos of the a-frame in flight.

Successfully photographing a small indoor kite in flight on just a meter (3 feet) of thread takes a number of attempts. Particularly when done under an open veranda, which is not a completely still-air environment! Motion blur and the kite in caught in unusual attitudes eliminate many of the shots from consideration.

Back in the house, a little more flying was done to confirm that all was well with the design. No problems!

Whoever coined the saying KISS (Keep It Simple Stupid) could have been talking about kite making, for sure.

The second prototype of the ... simple ... Indoor A-Frame kite passed all the tests with (ahem) flying colors! On its first foray around the house, the small lightweight kite floated up steadily. It weaved slightly at times but certainly didn't wag the tail like the first prototype.

With a little more walking speed, the thread rose to about 50 degrees and it would have clearly stayed there if there had been more room to walk around. Great! What a relief. I'm still getting over that ill-fated fan kite experience ;-)

Using the ticking living-room clock as a timer, the a-frame kite was able to stay in the air for almost 10 seconds, over the standard course. Nine seconds would have been enough.

Flying over a circular path was not quite as straightforward as with the superbly stable delta and canard. But the A-frame managed to stay up for several circuits, albeit with some swishing around on 1 meter (3 feet) of thread.

Finally, and quite importantly, came the speed test. It took a few tries to pop the gust reading of the wind meter over 6 kph, as I held it in my towing hand. But there it was—6.7 kph and not a scratch on the kite. OK, more accurately, no bent or overstressed paper spars :-)

So it's on with the free online instructions now. And there's just one more Indoor Series design to go, before I make a start on the e-book Making Indoor Kites.

And it didn't take long either, this design being such a straightforward build.

The first few test flights around the house were promising, very promising, since the Indoor A-Frame looks like being one of the slowest flyers of the lot. However, this first effort had a small shortcoming.

Whereas the fan kite flew like a dog, the A-frame wagged its tail like one ;-) But all was not lost; a fair dose of extra dihedral should help greatly. Also, by redesigning all the spars it should be possible to concentrate the weight a bit closer to the center. It all helps.

These small indoor kites can be quite sensitive to the exact position of the towing point.

At first, the A-frame seemed unwilling to climb near the middle of its speed range. So, the towing point was shifted back 1.5 cm, which meant shifting the horizontal spar went back as well. That proved to be too much, causing the nose to rear up suddenly and the main spars to bend—too draggy! Then, without touching the spar again, a shift of just 0.5 cm forward had the kite soaring around more comfortably. However, there were not many chances to go high since the directional stability was inadequate. That wagging tail was a problem!

Another build will be underway shortly, with the sail dimensions altered to match the new horizontal spar position. Also, all the spar dimensions will be tweaked to add strength and reduce weight in all the right places. I'm hoping for a stronger and more stable kite next time.