How to Build a Dopero Kite

This set of instructions on how to build a dopero kite assumes you know absolutely nothing about kite making. You might already have some of the simple tools and materials required. 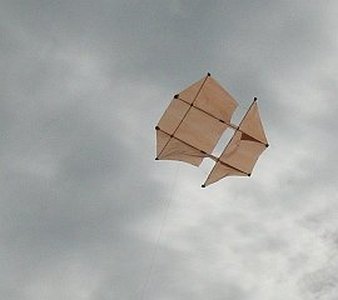 Anything you don't have is easily bought. If not exactly what I used, then at least something pretty similar!

The MBK 2-Skewer Dopero Kite is small compared to shop-bought doperos, at 58 cm (23 in.) across and tall. Some dihedral on the outer panels of both the upper and lower sails give good all-round stability without the need for a tail.

This 2-Skewer Dopero is an efficient light-wind flyer. Take it out when it's not very windy, and you won't be disappointed. Also, the four-leg bridle keeps the frame rigid, letting this kite cope with stronger winds as well.

This little kite's claim to fame is sitting up high over the beach one day when nearly all other kites had descended to the sand—at the Adelaide International Kite Festival! The icing on the cake was when the commentator noticed and made some remark about it :-)

How to Build a Dopero Kite
Frame

Have you read the page on kite materials? If you haven't already, do it now to see what's needed for building a dopero kite.

For this dopero, you need to glue skewers together to form the four spars. Since this kite has plenty of sail area for its width, there is no need to worry about selecting the lightest skewers! In fact, stiffer and heavier skewers would be good for the vertical spars. As for any kite, it's best to try and match the left and right ends of the horizontal spars as well. Having said all that, just using any old skewers at random should not present any real problems. The wind range of the kite might not be as good as it could be, that's all. You can always add a bit of tail!

How to Build a Dopero Kite
Sail

The template shown above represents one side of the kite sail. You will now transfer these measurements to the sail plastic. 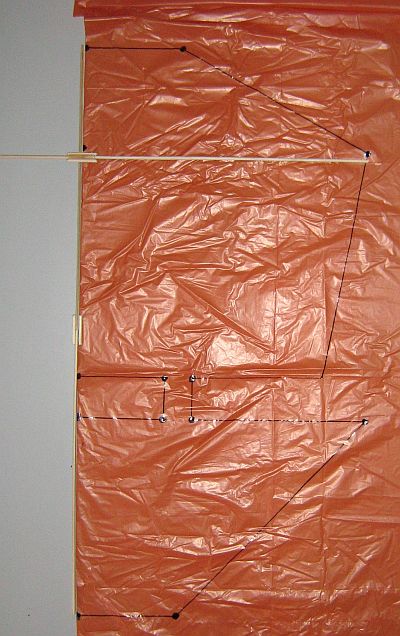 Note: Arranging the spars on the plastic by eye is quite accurate enough, as long as you take some care. Since both sides of the sail will be identical, any small error in judging the 90 degree angle has almost no effect. I have made the dots big just so they show up easily in the photo. 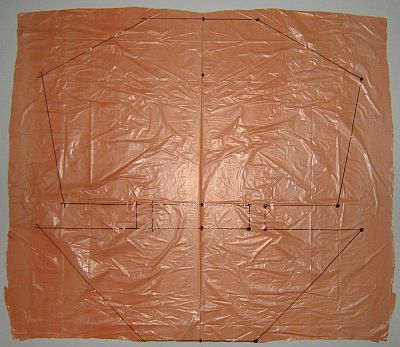 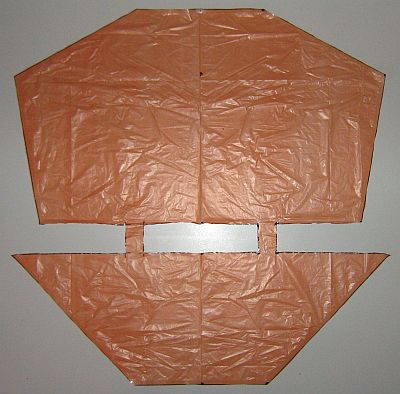 Note 1: I pull off the length of tape required, plus a bit extra on each end, then lay it down in one motion, pressing to the plastic at both ends at once. Then I smooth along the tape with a finger, making sure it is stuck down firmly along its entire length.

Note 2: Don't worry about overlapping lengths of tape at the corners; it will all look tidier after the cutting is done. 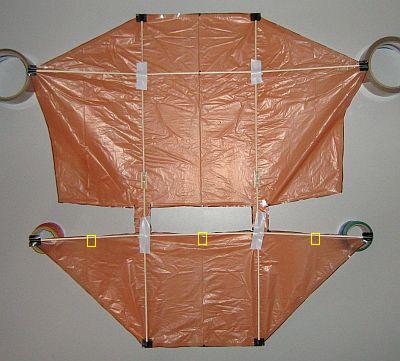