How Does a Kite Fly?

A Tale of Four Forces

How does a kite fly, you might ask. Here is a simple summary of all the reasons your single-line kite flies at the height it does. The reasons for any other behavior, such as looping, are not covered here.

This page starts out a bit like a high-school science lesson. However, it soon moves on to some interesting real-world situations which also relate to the question "how does a kite fly?". 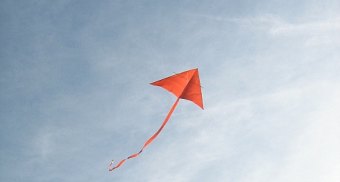 The overall effect of air flowing past a tethered kite can be thought of as a single wind force which has a direction and a strength. This force acts through a point somewhat forward of the center of the kite's shape.

However, when analyzing the flight of wings, including kite sails, it is usual to consider the wind force as the sum of two separate forces, lift (1) and drag (2). Lift points vertically upward, while drag points horizontally downwind.

Let's assume for a moment that the flying line is infinitely thin, so it has no wind resistance. Still, it experiences line tension due to the wind force trying to pull the kite away from where it is tethered. The line tension is also affected by the weight of the kite itself. In fact, the tension can also be considered to be the sum of two forces—thrust (3) and weight (4). Thrust acts horizontally against the wind. Weight is a combination of the full weight of the kite itself and some of the weight of the flying line. Imagine the flying line tied to a fence rail; it's clear that the fence is also taking some of the line's weight!

All these forces reach an equilibrium or balance when the kite rises to its maximum height. At this maximum height, the line tension exactly balances out the wind force. With no resulting force on the kite, it moves neither up nor down. And neither backward nor forward, until something else changes, like the wind speed or the line length.

How Does a Kite Fly
On Various Lines?

In the real world, flying lines aren't infinitely thin. Hence, the air resistance of the line does play a part in the kite's flight. The longer the line, the more air resistance it has, therefore the lower the flight of the kite.

Just imagine holding a long, light ruler, extending vertically up from your fingers. It's pretty clear the wind will simply try to blow it down. You'd feel the twisting force in your fingers.

Second, flying lines aren't weightless. That's pretty obvious when you have a kite up there on a long length of line! See the great bow in the line. That's largely due to the weight of the line, making it hang down like a chain between two posts.

Air resistance also plays a part in bowing the line. For a given length of line, the more bow, the less height the kite can achieve.

In contrast, very large and heavy-pulling show kites have their line strength more closely matched to the pull of the kite. Hence there is usually very little sag in the line. But if you look straight along the line, you'll see what little sag there is.

How Does a Kite Fly
In Various Winds?

You have probably noticed that your kite doesn't always fly at the same height, even when flown on exactly the same length of line. This is because every kite has it's own optimal wind-strength.

If the wind is weaker than this optimal wind-strength, then the weight of the kite is a bigger factor in the overall balance of those four forces, and the result is a lower line angle. To put it another way, the Lift force is still greater than the Weight force, but not by as much, so the kite cannot rise as high.

I've had some delightful kite flights where the kite barely hangs in the air, flying in well below its optimum wind-speed! This often happens near sunset.

If the wind is stronger than the optimum wind-strength, then the Drag force is the factor which forces the line angle back down. Lift increases too, but not as much as the Drag!

I remember a great illustration of this on a windy day at a kite festival. A huge stack of Taiwanese traditional kites was still airborne, but blown down to less than a 45 degree angle by the strength of the wind. Normally, these stacks reach much higher line angles.

More recently, at the Royal Adelaide Show 2010, a giant orange Octopus kite was aloft in a very stiff breeze. The wind was so strong that the kite was blown down to only a 30 degree line angle at times!

There's another implication of the weight of the flying line. How does a kite fly much higher when there are hundreds of meters of line hanging below it. If you continue to let out line, there comes a point where it weighs so much that the kite cannot lift it any higher—not even at the optimum wind-strength. The only way to make the kite fly higher, all other things being equal, is to use a lighter line!

With my own MBK kites, this effect is only seen with the tiny 1-Skewer kites. Those 2-Skewer and Dowel kites pop right up to the 120 meter (400 feet) legal limit, as it is here in Australia. The only thing preventing them going even higher is my law-abiding nature :-)

How Does a Kite Fly
In Different Weather?

Now we come to two factors that have nothing to do with the kite itself.

Thermals are regions of rising air, which form due to temperature differences on the ground. A giant bubble of air which is just slightly warmer than the surrounding air is less dense. Therefore, it has a tendency to rise. It won't rise indefinitely, but a more complete discussion of thermals is beyond the scope of this page ;-)

Anyway, my kites find themselves in thermals all the time. To varying degrees, these patches of rising air occur all year round and in all sorts of weather. Sometimes, for example in warm weather, thermals can be large and strong. In this case, the effect is very obvious. Just about any kite will fly a lot higher than usual if it finds itself in rising air. Eventually, the rising air is replaced with horizontally flowing air or even sinking air. You can guess what happens then!

I once had a light-wind sled kite on 120 meters of line, tugging strongly away—directly overhead! This effect causes many onlookers to wonder "How does a kite fly directly overhead?" when there seems to be hardly any wind at all!

Wind gradients always exist when a wind blows across a landscape. This just means that the moving air is slowed down somewhat, the closer it is to the ground. There might be an average of 2 knots wind-speed on your face. Fifty feet up, it might be 3 knots. Up around 200 feet, it might be more like 6 knots.

Of course, it goes the other way too. Sometimes your kite takes off OK, but when you let it get really high, the wind becomes so strong that the kite cannot cope and starts to loop around in protest!

How does a kite fly? A flying kite can look so simple, but the answer to the question tends to get more complex the more you look into it.

There's one of our homemade deltas in flight, in the video.