Here's a short history of power kites. A number of different types of power and traction kites came onto the market over the years.

A very significant early power kite was the Flexifoil. Way back in the 70s, it was a two-line design by Ray Merry and Andrew Jones who worked in England. Flexifoil is now the name of a kiting company.

By the late 80s, an improved foil design called the Sparless Stunter was being sold. Designed by Ted Dougherty, it had six cells and a square outline. It was soon overshadowed by even more advanced kites.

Soon after the Sparless Stunter came the Quadrifoil, also by Ted Dougherty. One of the very first four-liners in the history of power kites, the Quadrifoil traction kite was rectangular in outline and was first seen in competition in 1990. This name became a brand, and many later versions of the original Quadrifoil were sold as the Competition C1 and C3. Power-kite history also records a Q2000 range and finally a Competition X range of Quadrifoil kites. All these later kites were roughly elliptical in outline and weren't actually designed by Ted Dougherty.

While all this was happening, another kite designer called Peter Lynn was just as busy. Peter came out with the two-line Peel kite in 1991. Being made in fairly large sizes, right up to 10 square meters (1080 square feet), the Peel was most often used for traction. A popular kite, it was still selling in the late 90s.

Another kite which was sold in the mid 90s was the QuadTrac, again by Ted Dougherty. A four-liner, construction and sales were handled by a company called Skynasaur.

Toward the end of the 90s, one of the original designers of the Flexifoil kite had even more success with a range of four-liners called Skytiger. Sticking with the rectangular outline like the Flexifoil, the Skytiger kites were reliable and stable traction kites. After the original range came the "Hi" series. The new kites were able to pull even harder.

Around about this time, some traction kites were designed for pure speed. They were a bit trickier to fly though! A good example of this was the Predator, by Peter Mirkovic of Sky Kites. In the late 90s, this was the most successful design in the UK, being used a lot in buggy races.

How did the history of power kites change in the new millennium? Well, the most interesting development was probably how paraglider manufacturers entered the traction-kite market! In particular, a well-known French company called Ozone got involved. These guys build aircraft so it's no surprise that the kites they produce are very high quality.

Power kites these days are specialized like never before. Take for example, three kites from Ozone. The Fury is "entry level" meaning nice and stable for new kite-flyers. The Yakusa is designed specifically for buggy racing. Another design, the Access, is sold as an all-rounder although it was originally designed for snowkiting. With its extra line, it can be depowered quickly if you are hit with a strong gust of wind.

That's it for my history of power kites. Will paraglider manufacturers end up dominating the scene? Let's wait and see.

Talking about paraglider manufacturers, the photo below is of an Ozone Fury! 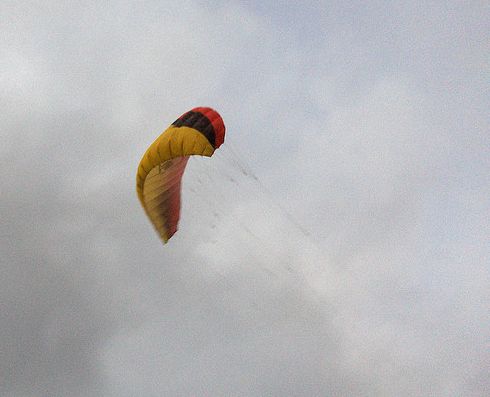