Unusual, But It Flies!

The helicopter kite operates on the same principle as a gyrocopter. It's something different! A large rotor is kept spinning by the airflow across it, like a fan being blown in the wind. Once spinning, the rotor develops lift like a wing and can lift the rest of the kite.

A small tail-fin keeps the kite pointing into wind, like the tail does for a diamond kite. Also, a small horizontal stabilizer at the back helps keep the rotor blade at the correct nose-up angle to the wind.

As far as my own flying products go, I never did tackle a heli. It's a bit hard to do in dowel and plastic sheet—or paper ;-)

The Helicopter Kite as a Toy

The most well-known product (and perhaps one of very few of this type) was manufactured in and distributed worldwide from a single location in the USA. Besides Helicopter Kite, this toy also popped up under other names: 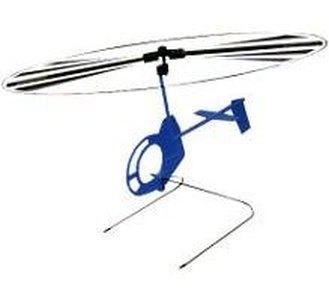 All these products were essentially the same, with the differences being mainly in the packaging. The kite required some assembly, but it was just a few simple plug-it-in operations as far as I could see.

I've seen videos of this toy in flight and it appeared reliable and stable. However, it would never reach the line angles of a good delta kite! Having said that, I still think it would have been something of a head-turner for the kids down in the local park. My boy would have loved one when he was quite young, I'm sure.

Apart from children's toys, some man-carrying craft of this type can be found in history. I should mention a distinction here. The gyrocopter concept can fly

Now let's look at both of these in turn.

Apparently the powered gyrocopter concept has been around since the 1920s. A motor would spin a pusher-prop, giving forward speed, while the free-spinning rotor above would support the weight of the craft. When improvements in helicopters made them practical, autogyros, as the free-spinning versions were often called, faded in popularity.

Autogyros were, however, used in the 1930s by major newspapers. Also, the US Postal Service used autogyros for a couple of mail-service routes. One of these routes ended up on the roof of a large building, which says something about the slow-speed capabilities of these machines.

But here's something very interesting—autogyros have made a comeback of sorts! They are now yet another type of sport aircraft.

So it's a saga that began with war machinery and has ended up in the children's-toys department!