OK OK OK (But it's Actually a Good Idea) 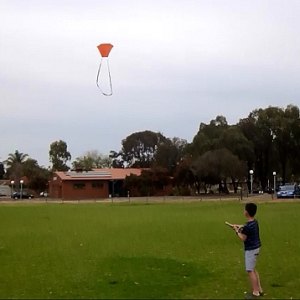 In fact, there's an RC Kite company in Singapore with the name GoFlyKite. That's what one businessman said to another, during a disagreement which resulted in the creation of the company. Believe it or not.

A visitor to this site has offered some more insight, noting that he has seen the expression pop up in several different cultures and languages. For example, in his own country, the Italian phrase is vai a far correre l'aquilone! which means go run the kite! The saying is at least several decades old, since it has been in use by a few generations now. Wouldn't you agree?

What if I told you this entire page takes a bit of a weird angle, exploring the actual reasons you might want to get out and fly a tethered craft. Would you tell me to go fly a kite ;-) Follow that link for some more straightforward analysis and illustration of the term.

A bit of a drive down memory lane has brought a whole lot of experiences to mind, which will help to illustrate some reasons for getting out to fly. Check them out, further down this page.

I Just Made One!

Probably the most compelling reason to go fly a kite is because you just made one!

With practice and experience, new kites nearly always fly well on their first outing. I never got sick of putting up a new design straight to 300 feet on the very first flight, weather permitting. It was a good feeling when it happened!

Apart from just a few outings with a sport kite, my experience is entirely with single liners, and mainly homemade ones at that.

It Plays on the Senses

That is, except for the sense of smell, unless you count the subtle smells of the outdoors—the grass, leaves, insects, and so forth. When I go fly a kite, I never seem to notice. But it's the other senses that combine to really make the kite come alive for the flyer. It's not just a kite. It's a kiting experience, and it can really uummm lift you. 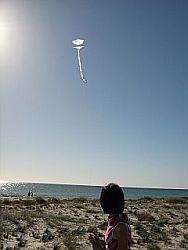 Just as an aside, it seems that the various major categories of kites tend to attract distinct personality types. Would you like some examples? Just three might illustrate the point:

Who hasn't heard of the time honored remedy of "getting out of the house for a while"? It's not an issue for some, who don't actually spend much time inside their own homes, but we're talking introverted kite-fanciers here :-)

A good long kite-flying session is good for removing various pressures from your mind. It gives you a break!

Spend some time out in the sun, protected by a wide-brimmed or flapped hat of course. The sunlight ups your Vitamin D levels, brightens your mood, and now I feel some verse coming on:

Experience the weather, even measure it,
With windsocks and bubbles lifting and swirling.
Anemometers and gauges whirring—
Flight-enhancing toys for the single-liner nut!

OK, that last line's a half-rhyme with the first line; don't you know anything about poetry? ;-)

It's good to have, particularly with small sons and daughters! Go fly a kite with them. My son Aren has been involved with my kite flying since the age of about 2 years. Much of his early kite-flying was conducted from a seated position in his pram! The photo shows him a few years later, with one of our bamboo-and-plastic roks. 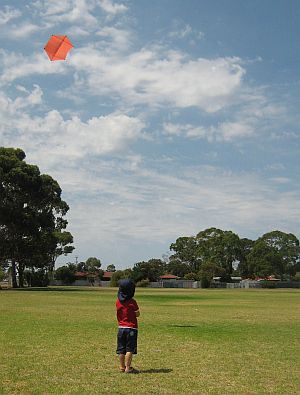 I'll just list off a few things now, that Aren did:

There's just a small sample of how kids graduate through stages in their kite flying.

Of course, kids need other things to do as well, since their attention span can be limited. Meanwhile, you get to continue to fly the kite. Usually you can tether it somewhere. Hence, you can spend time with the youngster, while keeping half an eye on the sky!

Although the main focus when deciding to go fly a kite or three is the flying, you can't help but notice people's reactions. It nearly always makes you feel something. Either about the kite itself or the flying experience that is unfolding. And, it's usually a positive thing! Now, here's a short catalog of people's reactions from past flying outings:

The Love of Flight

And I'll spare you the poetry this time. However, there is something poetic about the flight of your favorite delta or rok.

The love of flight spans many things in some of us kiters. Some might enjoy the full range of kite craft, from traction right through to indoor featherweights. Others focus steadily on one form or the other. Like Ray Bethell, who only cared for stunt kites but took it to the nth degree—world records and all.

And that's only kites! Examine people's backgrounds and you will find airline pilots, glider pilots, aeromodelers, heck maybe even frisbee or boomerang throwers. Chances are, a kiter has flown something else in his or her lifetime.

In my case, that's just about everything without an engine, except balloons. And I'll have to fix that itch one day!

When these people go fly a kite, it tweaks something in their soul. It reawakens the mystery, the draw, of flight all over again. It's something that remains even after you have gained a solid grasp of the principles of flight. You might know all about it, but you never get sick of experiencing a flying object all the same!

"If it flies without an engine—even purer, even better!" That's just a thought.

Now, go fly a kite will you!