From the Original to Stackers

The word Flexifoil used to mean one thing—a power kite, rather thin in section and tethered at the extreme ends of a rod running through the leading edge. It was such a simple setup, although experimentation and refinement were necessary to get the concept ... ahem ... off the ground. There's an old foil of this type in the photo, courtesy of Gary Mark. It's an original, built by kite-company co-founder Andrew Jones, featuring one-of-a-kind maple-leaf appliqué. 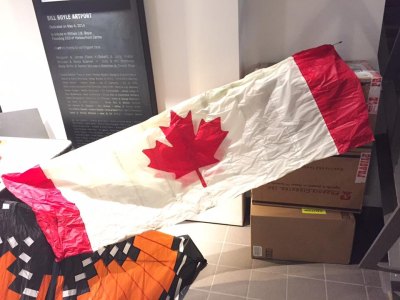 An original Flexifoil with spar inserted

In fact, the whole sport of power kiting was first popularized by this very design which came from England.

These days, the name is more associated with a global kite company that has branched out into a range of surfing and recreational power kites. But instead of the original kite-design fading away as ancient history, it has seen some significant improvements in materials and construction.

The original kite has lived on as the Stacker 6! People post videos online, extolling the simplicity and sheer speed-performance of the kite.

Stacker kites, just like the original, are more popular for land kiting than the other forms of traction action such as kite surfing and snowkiting. Yeah, on this page I'm going to bang on about the Stackers and where they came from rather than attempt to cover all the other designs that have been produced by the company over the years.

Have I flown a Stacker? Well, our club did find an example among a bunch of second-hand kiting gear we bought from interstate. One day at the monthly club fly we pulled it out, attached a set of lines, and gave it a shot. Unfortunately the breeze was rather light, and the guy who flew it ended up walking backward just to keep the sail off the grass. But one of these days we'll see what the excitement is about when the kite gets going in a stiff westerly, I'm sure!

By all accounts, you can pull out an old one from 1972 and it flies pretty much like it did back then. That's quality, which has always been a hallmark of the company. Even back then, a lot of testing went into the products before they were made available for sale.

One of the original team worked for a Dutch fabric company. So that would have been handy for getting a good price on the ripstop sail materials of the day.

Interestingly, the oldest flexifoils had a cane rod as spar material!

Even in the 21st century, natural materials continue to compete well with the very latest carbon technology in some niches of kiting. For example, have you ever seen how well a traditional Indian kite flies? Tissue and split bamboo is all it is. And I was very impressed with the flight angles of a large Malaysian wau bulan we saw once at the local kite festival. There was no carbon in that thing, and it was out-flying most of the big deltas.

Or should I say Stackers. There's a few sizes to choose from now, apart from the Stacker 6 which is actually the original flexifoil design re-done in updated materials and manufacturing. The 6 is the kite's flat span in feet.

Talking about materials, the sails are Chikara ripstop nylon—chosen for great performance and durability.

The multi-tapered flexible spar is made from the best carbon product the company could find. Regardless of sudden drops in wind pressure, the kite stays in shape by having this rod all along the leading edge. Anyone who has flown a soft stunter knows the feeling when the sail suddenly curls or collapses causing temporary loss of line tension and hence control. It's more of a problem with the cheap ones, we find!

A little refinement or two helps people get the modern design in the air as quickly as possible. For example, the unique spar-grip connectors are handy.

Again, the number after the name denotes the kite's flat span in feet. Each kite comes with one pair of stacking lines in case you need them.

Apparently, mixing kite sizes in a stack is quite do-able, but you do need to put the largest one at the top. Otherwise, I can imagine the top of the stack getting left behind from time to time in strong gusts! I can also imagine the smaller kites being affected by the wind shadow of the larger ones in some situations. Feel free to comment below if you have any relevant experience. 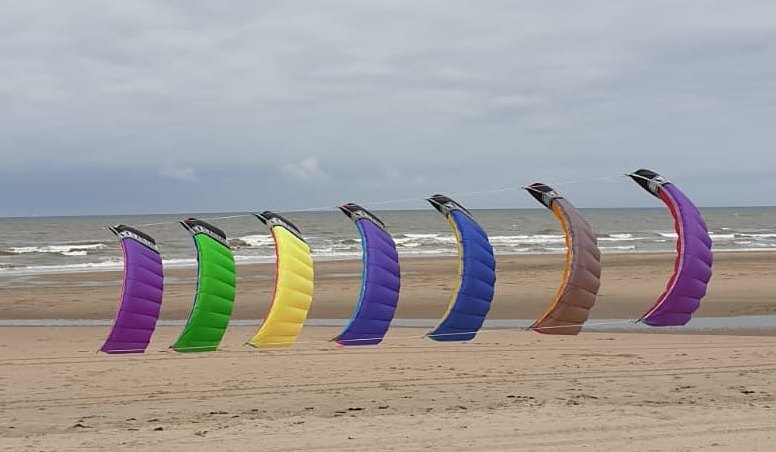 Oh yes, this classic kite has made a name for itself at times. Check out the following records:

Here's a short quote from people in the company itself:

"In 1972, Ray Merry and Andrew Jones, two graduates from Cambridge University were inventing a wind sculpture. By accident, they had actually invented a power kite. Their invention needed a name and within days, Flexifoil was born. They joined forces with the Van Dort brothers, Mauritz and Theo. Mauritz worked for a Dutch fabric company and Theo was an entrepreneurial investor. With the right team in place, it wasn't long before Flexifoil kites started to appear on fields, beaches and wide open spaces across Europe."

You'll love the quirkiness of this history of flexifoil kites as well.

Apparently Andrew is still inventing and Ray is in the USA running his own kite business. Theo's son Anthony heads up the brand today. And it's a global brand with more than half a million kites sold across all continents. That represents a lot of growth from the original small British kite company in the 70s.