The re-vamped Dowel Sode kite proved itself to be a smooth, stable, and predictable flyer in moderate winds today. Yet, it was also a somewhat exciting single-liner to fly, due to its high efficiency and the wide range of line tension. It remained smooth even when pulling like a horse! 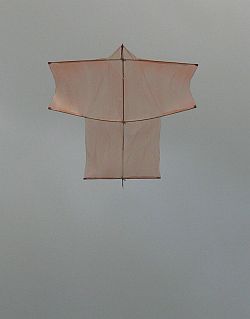 On arrival at the reserve, winds were light to moderate at ground level. The gusts bordered on being fresh, which was a bit of a concern!

This being the fourth or fifth time, the kite went together fairly quickly. Practice makes perfect. Puffs of wind were swirling around the trees near the edge of the reserve. It took three tries to get the Dowel Sode kite launched, since I hadn't bothered to move further out.

Once above 3 meters or so, the pale-orange sode rose up smoothly and quickly.

After walking toward the center of the grassed area, I let out line to around 40 meters (130 feet) or so.

The gusty winds were causing the occasional loop, and yet the kite's behavior was very smooth and predictable. The instant the kite was under less air pressure, the tail would swing down like a pendulum.

One thing you can do with tailless designs is to ensure the heaviest end of the vertical spar is at the tail end! It really helps.

At this height, just a little zoom was sufficient to get some good pictures. It was a pity about the almost solid cloud backdrop though, with hardly any blue showing through. At about this time, the thought occurred to me that this is an exciting kite to fly! Why?

Mind you, with ear touching line, a high-pitched whistle could be heard as the moderate-to-fresh wind streamed past. During the strongest gusts there was also a strange scratchy kind of vibration coming down the line.

Letting out more line proved a bit tricky, due to the tension! One of these days I need to invest in a proper kite-reel with winder and brake. The sode flew on 90 meters (300 feet) of line for some time. Often, I found it more comfortable to use both hands as the fresh gusts tore at the kite. Remarkably, all this was happening at rather high line angles!

A passenger jet took off from Adelaide Airport, circled around to an eastern heading, and climbed out overhead.

For a moment, the moon, Dowel Sode kite, and jet were aligned not far from each other.

Some minutes after the jet had disappeared over a cloud bank, I was amazed to notice that its wake had carved a long slot in the cloud bank! A long thin area of blue sky showed through, maybe twice as wide as the jet's wingspan. That's a first for me.

After about half an hour, with the sun approaching the horizon, winds moderated and smoothed. Delightful kite-flying conditions ensued, with comfortable one-arm flying! The sun later went behind a bank of thick cloud, enveloping the entire reserve in shadow. With the line tension more manageable, I let it out to 120 meters (400 feet), and the kite still nudged a 75 degree angle a couple of times, in weak lift.

At this height, the sode's span of 1.2 meters (4 feet) was less than the apparent diameter of the moon. The kite flew between 300 and 400 feet altitude, depending on air speed and lift. Eventually, I just dropped the winder on the grass and walked toward the kite, pulling it down and laying line onto the grass.

There was still a little too much line tension to just wind straight onto the winder.

With the Dowel Sode kite rolled up and the line removed, I went back to the reel and wound on all the line. It was a great outing really, although all on my own this time!