After a dead calm earlier this morning, the Dowel Sode kite had a wonderful flight just 2 hours later. We were down at our favorite flying field, with just a few hints of a very light breeze tickling the treetops. 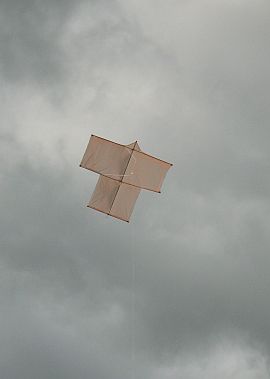 The grass was still damp from a generous dumping of rain during the week. Of course, this is not a problem with a plastic kite.

A few half-hearted tow ups kept the sode aloft for a few minutes at a time. In the back of my mind however was the thought of waiting for the sun to come out.

Large cumulus clouds were everywhere, one of which was blotting out most of the sunlight. And with it, removing any hope of getting really good images from our cheap digital camera! It needs good sunlight to get solid color saturation and contrast in the pictures.

We didn't have long to wait. Maybe 5 or 10 minutes after the light levels increased, there were signs of some thermal activity stirring. Light gusts started coming through at ground level. You beauty! (Sorry, Aussie expression.)

Soon, a slightly longer tow saw the Dowel Sode kite hit a more constant light breeze higher up. In no time, I was able to let out 60 meters of line. This was a good distance to snap off a few photos and get some video, before letting out flying line again to 90 meters.

At this length, I had a little fun exploring the sode's ability to do controlled tail slides! This was done by pulling it up a few meters, then letting it slide down again, tail first. Sometimes the kite took quite a bit of line as it drifted downwind at the same time.

The wind speed was still pretty marginal, so the kite had a few long slow descents and equally slow climbs. It keeps things interesting! Sometimes the sode would halt just 50 feet off the grass before starting back up again by itself. At other times, I had to intervene and pull in line fairly briskly until a scrap of slightly faster air tightened up the line again.

A HUGE cumulus (or perhaps it was a cumulonimbus) went overhead. Not surprisingly, it was accompanied by a fairly energetic thermal that sucked up the Dowel Sode kite to a high line angle. This really put some tension on the line! The large orange kite came alive. It accelerated here and there, though occasionally it hung a bit lower in sinking air.

It was time to let out even more line and really let the kite shine!

With 120 meters (400 feet) of line out, we walked over to a nearby sandpit to let Aren (4) play for a while. The kite was too much for him to handle at this stage, even using both arms! It was a pleasure to see how reliably the Dowel Sode kite was flying, after having removed a little wood from one of the spars a few days ago.

The wind was still almost calm below 50 feet. Above that, an almost moderate NW breeze was blowing. Somewhere between 500 feet and perhaps 3000 or so, there was a much fresher breeze from due west—as indicated by thick gray-bottomed clouds scooting by. Higher again, perhaps around 5000 feet, more cumulus clouds just sat there, not moving at all! Maybe it wasn't a dead calm, but perhaps there was just a very light breeze up there.

Wind shifts and punchy thermal gusts continued to make the Dowel Sode kite put on an impressive flying display. I was trying to appreciate it, but had to rest my neck once in a while! The darn thing's just too efficient.

While sitting on part of the play equipment in the sandpit, some kids came out of a thicket of trees and finally noticed the kite. "Look! Look how high it is!" One boy came over, curious about the kite, and I told him about the Japanese origin of the design. I also put in a plug for the My Best Kite website ;-) , but he didn't seem to register. He just ran off and announced something about "It's a Chinese kite!" to his playmates.

Aren is reading this as I write it and has insisted that I include the following sentence:

"Aren was playing with the kids in the sandpit."

There you go Aren!

We eventually started reeling in the kite, since it was past lunchtime. It took some doing since the sode had no intention of coming down! Again, the Dowel Sode kite caught the kids' attention when it was coming in on just 10 meters (35 feet) of line. "Ooooh! Cool!" One young lad came over after the kite was on the ground and, with my permission, touched the plastic sail. Apparently that was cool too.

So it was a great flight from the Dowel Sode kite today. It really can be quite an exhilarating single-liner to fly in conditions such as today's!