The improved Dowel Sled kite is more resistant to collapse; the proof was today's half-hour flight to 400 feet! Earlier in the day it looked like the breeze was a touch fresh, and it was also very sunny with the possibility of moderate thermals. However, by the time we arrived at the reserve, the wind had moderated quite a lot. Perfect! 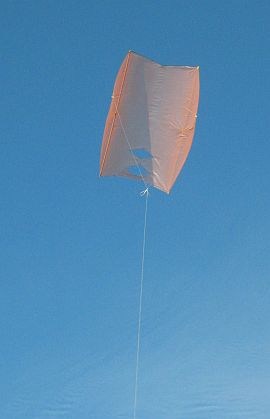 May (my wife) had wanted some video footage of our 4-year-old flying a kite. So, after unrolling the rather long bridle lines and getting the kite in the air, I got busy with the camera. Aren was able to manage, thanks to the very light wind conditions.

Over the next 10 minutes or so, the kite had a number of short flights due to collapses in patches of turbulent air. Even so, it gave far less trouble than the old sled!

On one occasion the kite literally turned itself inside out, as it floated down after a collapse. Another time, the bottom end of a spar snagged through the bottom vent hole.

Some more camera work was completed while the kite was still on only 40 meters (120 feet) of line.

There was one interesting shot where the wake of a passing passenger jet had carved a trough in a cloud layer! So far, that's only the second time I've seen that. A photo was taken both times though!

After this, I got serious about letting out more line.

The Dowel Sled kite was going to 400 feet today! Even in the smoother air higher up, the kite got hit with a few random gusts which sent it into slow free-fall back towards the ground. Some fancy line work usually managed to get the kite reinflated though.

On one occasion, this resulted in a fully inflated but vertical dive toward the ground! However, the natural stability of the sled was enough to right it, and the kite did a half loop and soared back up.

As the afternoon wore on, the wind strength started to die off. Every now and then, a gentle thermal would loft the lightweight sled up to around 70 degrees of angle. Without rising air, the kite was hanging around the 50 degree mark. With just the right wind speed, this kite should manage 70 degrees or more without thermal assistance. That's based on the previous kite's performance.

Above 300 feet, the big orange sled had a great time, rising and falling in response to small changes in wind speed and patches of gently rising air. The big arc of thin plastic sometimes swelled and contracted, with corresponding changes in line tension.

And then it happened. A major collapse occurred from nearly 400 feet!

The kite came down as a very thin bundle. A couple of attempts to reinflate were unsuccessful. Down under 30 feet altitude, I had given up, but tried one last time. A firm tug-and-release managed to pop the sail open for a moment. Pulling in line kept the sail flying, and the Dowel Sled kite tensioned up the line and sailed right back up to 400 feet! Whew. What a save.

Aren and I parked our butts on the grass in the shade under a tree, while the Dowel Sled meandered around just above 400 feet. At last, the sled was flying as I had always intended it to.

Eventually, the dying wind speed took its toll and even the great light-wind capabilities of the Dowel Sled kite were not enough to keep it in the air. Mind you, I tried very hard to keep the kite up, and did manage a few small climb outs as tiny wind increases came through the reserve.

In the end, I brought the kite right down to where I was standing, and undid the line from the bridle. After winding all the loose line back onto the winder, we went home.

The Dowel Sled kite is very good in light winds, but the less thermal activity the better! Sudden changes in wind strength aren't so bad for it, but the chaotic mess of thermal turbulence will often send it straight to the ground. If that bothers you, just make one with heavier plastic—two-ply perhaps. That does improve resistance to collapse, at the expense of some light-wind performance.