Trimmed for the Whole Wind Range

Having corrected the spar curvatures, I just couldn't resist flying the Dowel Rokkaku kite again. The results? Well, the subtitle up there says it all! The sizable rok is now a delight to fly, in any part of its wind range. 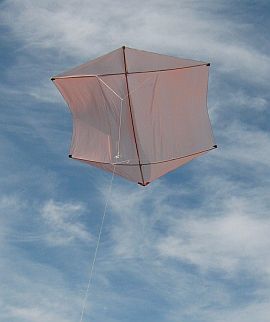 On our way to the reserve, it seemed that conditions were very light indeed. Hazy mid-level cloud covered much of the sky, although plenty of sunlight was getting through.

On arrival, the Dowel Rokkaku kite was soon rigged. Then it took off willingly in the first light puff of breeze to come through. I had adjusted the towing point well back, to get the most light-wind performance out of the kite.

However, there seemed to be a sharp increase in wind speed above 40 feet or so! This often happens in this location with some wind directions.

Today there was a westerly, which was slowed down near the ground by a grove of trees a short distance upwind. I flew the Dowel Rokkaku on just 60 meters (200 feet) of line for a while.

It was very satisfying to see how the kite reacted to gusts, now that the horizontal spar curvatures were fixed. There was no tendency to pull left, as it used to do even with some hefty adjustments in the bridle loops.

All it took was some careful rubbing away at the spars on one side, with a wood file. This reduced the diameter of the dowel just a fraction. Hence, the bend on that side matched the other side more closely, with the spar under tension from the bow line.

Occasionally there were some lulls with not quite enough wind to keep the kite at a high angle. So, a little working of the line had to be done to keep the kite out of trouble. I had just started to enjoy some higher flying by letting out even more line, when the bottom right spar cap pulled away! The first indication of this was when the kite started slowly looping to the left.

The Dowel Rokkaku kite had been getting thrashed by some very fresh thermal gusts. Thermals were getting more active, as could be seen by several juicy cumulus clouds that had started to form.

Looping to the left? That didn't make sense at first, since normally a kite will loop toward the side with less effective sail area. With the bottom-right part of the sail flapping away loose, that was the right-hand side!

When I thought about it again, after getting home, a possible reason occurred to me. Without the sail being anchored to the lower spar on the right side, perhaps the vertical spar was being bowed to the left. This, plus some sail billow, would have acted like a rudder, steering the kite into a loop to the left and overcoming the sail area imbalance.

Anyway, enough of the technicalities, which tend to make most people's eyes glaze over.

The Dowel Rokkaku kite was right over power lines and a road. That's not a problem at over 300 feet, if you are monitoring it. But now it was time to move quickly. I also needed to clear the trees at the edge of the reserve. The wind direction was not helping, since it had shifted more toward the north.

To summarize the next few nerve-wracking minutes... I moved crosswind which gave the kite a little more room, while also pulling down line onto the grass. The sail problem had also affected the trim of the kite, increasing the tension in the flying line! But I had no choice, since every loop was losing several meters of altitude. I just had to keep hauling it in, and hope that none of the spars snapped!

Soon the Dowel Rokkaku kite was safely on the grass, just a few meters inside the row of trees. During the last few loops I had watched the kite's shadow flitting across the trees' foliage. This gave me a clue that all was going to end well!

After fixing the spar cap, I reinforced all the others too, just in case. You can see the black bits of extra tape in the photo.

Immediately after relaunching the rok, I backed off just a short way, put the line underfoot, and snapped off a few photos. Following the line back a bit more, I had the kite on about 20 meters (70 feet) of line. This time, the kite posed for some video.

We walked all the way back to the original tether point. The winder was still lying near the tree, the line wrapped a couple of times around the trunk.

From here on, it was an enjoyable high flight. Strong thermals were passing through, but the Dowel Rokkaku kite took them all in its stride. Sinking air occasionally made things interesting with sudden losses of altitude! Wind direction tended to shift around quite a bit too.

Despite extremely light winds at ground level, thermal gusts occasionally bent the rok severely. Impressively though, the kite remained true, with not a hint of wanting to loop left or right.

I wished I had shifted the towing point forward a little when I had the chance. Still, the kite was coping. We left it up there for at least half an hour, still tethered to the small tree. Once in a while, I had to grab the line to keep it clear of the leaves of a nearby large tree.

Naturally, some of the time was spent craning our necks to appreciate the kite wandering around almost directly overhead on 120 meters (400 feet) of line! This got mildly interesting in one case where it decided to head directly downwind for a while. Of course, this soon became a steep dive toward the ground. Don't worry, it pulled out by itself.

Just before deciding to take the kite down, two pelicans flew over at a fair height. They were probably higher than the rok. As usual, the birds were not flapping, preferring to soar on any scrap of rising air they encountered along the way.

And so finished a great flight with the Dowel Rokkaku kite!