Had to Fly Higher to Find Slower Air!

The weather looked like it would suit the Dowel Rokkaku kite nicely. Earlier in the day it had looked like a dead calm. However, as we got out of the car in the midafternoon, there was definitely some breeze about. Cool light winds blew,  under an almost overcast sky. 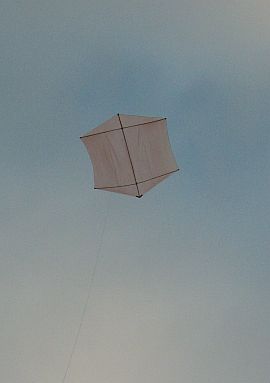 The kite was soon rigged. Very light puffs of breeze hardly disturbed it as I did up the shoelace ties and bow line toggles.

With the kite just sitting face down on the grass, we backed away upwind, letting out line. Soon enough, the 30 meter (100 feet) tag came off the winder.

It was an easy matter to slowly drag the kite towards us. The rok moved less than a meter across the grass before it rose.

Then it rotated like a jet taking off and climbed slowly and smoothly, straight overhead and right into a thermal! It happens occasionally, but today it was a little surprising because of the cool conditions.

After taking some photos, we made our way toward the center of the field, letting out line to 60 meters (200 feet). I was content to fly at this line length for a while.

However, the wind was surprisingly fresh above 50 feet, and the Dowel Rokkaku kite spent a lot of time on its side, struggling to climb! Not willing to put up with this for the next half an hour or so, I took kite down. It was nearly on the grass when I noticed that both bridle loop knots were shifted almost a couple of centimeters to the right. This resulted from an earlier attempt to cure the left-leaning problem!

Oh well, it seems I need to get to those horizontal spars again with the wood file. One side is still a fraction too stiff. In the meantime, I pulled the spars through the ties a little, hoping this might be a temporary fix. Also, I shifted the towing point forward by a centimeter (half an inch), to ease the wind pressure on the sail a bit.

We walked out to the winder again, and I let line slip through my fingers as I went. The Dowel Rokkaku kite climbed rapidly. It was soon flying high again, although still with a slight turning problem.

We continued walking toward the far fence, letting out line to 90 meters this time.

At 90 meters, it wasn't long before I thought "what the heck, let's go to 120!" We ended up near the fence line of the oval. A handy tree became the anchor for the flying line. Two and a half turns around the trunk was all that was required, with the winder left on the ground. The line went out at about 60 degrees, while the kite itself was at about 70.

I took some video, with the zoom cranked up to 4x so the kite wouldn't look like a dot! At close to 400 feet up, the rok was looking more comfortable.

I assumed that the wind was moderating as it often does during late afternoon. The time was about 4:30 pm. Over the next 20 minutes or so, the Dowel Rokkaku kite flew between 45 and 70 degrees depending on wind strength.

Movie footage later showed up some shifts in wind direction too.

Eventually it was time to leave. I unhitched the line from the tree and started winding in slowly. As the kite came down, it hit faster air again, below 350 feet! More sideways antics ensued.

This is an unusual situation, with a low layer of faster flowing air, but here was proof that it happens!

Finally, below 50 feet, the Rokkaku dropped into the wind gradient plus some turbulence from the houses and trees behind the fence.

I snapped off a few photos as the kite got close enough to get good-quality images. Well, they were as good as the low light level would allow anyway!

A nice soft tail-first landing on the grass ended the flight, with several meters of line still out. It wasn't a bad outing, but it will be nice to see how the Dowel Rokkaku kite performs after those horizontal spars are fixed!