The Dowel Dopero kite had its very first test flight today. Success! A couple of small adjustments are needed, but that's all. With Aren safely in his pram so he couldn't run amok, I started rigging the dopero on the slightly wet grass. All went well, but it's certainly the longest setup for any MBK kite so far! 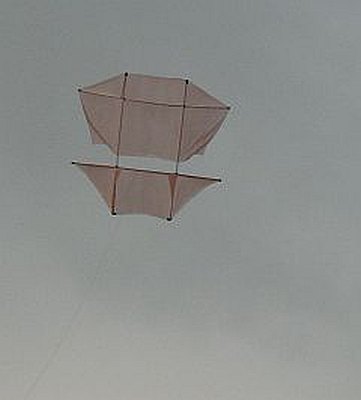 A light breeze played with the loose outboard panels of the Dowel Dopero kite as I held it up for a towing-point check. Once the knot was shifted a couple of times, it felt right for a launch.

Straight from a hand launch, I let out some line and coaxed the dopero up several meters. For the next few minutes I just the flew the kite low for a while while letting out more line. Up went the kite to 30 feet, back down to 10, up to 20, and so on.

There was quite a sharp wind-gradient, with very light and gusty winds at ground level.

It wasn't long before the kite contacted faster air. I could quit working the line and just hang on as the dopero started to tension up the line and climb steadily upward.

The good stability was immediately noticeable, in contrast to my sorry experience with the roller last month! The roller is fine now, with the help of a little ballast attached to its keel. Once bitten, twice shy as they say, so I had been prepared with the dopero.

Only my newsletter subscribers will be told the sneaky details of how I designed the dopero to have a more rearward balance point, without resorting to extra ballast.

At around 30 meters of line out, I handed over to 3 1/2-year-old Aren, who flew from the pram while I took some video and photos! Good little man. I told him to "hang on tight" and he did. Actually, he had even taken the liberty to haul in a couple of meters of line while I was busy. Some of the results are on this page.

A couple of small faults surfaced. As I let out a little more line, I noticed a tendency for the kite to pull left under load. This should just be a simple matter of shifting the two bridle-loop knots to the right a few millimeters. The Dowel Dopero kite looped once to the left, right down into slower air, where it promptly recovered and eased back up to a high line-angle again. The flapping of the upper-sail trailing edges could just be heard. Those ties were far too loose! Never mind, they'll get tightened up later.

Now it was time for a bit of fun!

With the line out to 60 meters, the dopero managed to get caught in some "cloud suck" on two occasions. For minutes at a time, it just meandered around at about 90 degrees of line angle as dark sections of low cloud went overhead. That means the kite was at about 200 feet. Gazing up at a flying kite is supposed to be relaxing, but I had to rest my neck for a while since the dopero was spending so much time straight above me!

Eventually it was time to bring down the Dowel Dopero kite as sunset wasn't far away. With the kite down to 30 meters or so, the clouds parted for a few minutes, lighting up the kite with the setting sun.

I continued bringing the kite down, when a small flock of white cockatoos zoomed in to take a look. There were 17 birds. I counted them twice. It's tricky when they keep changing their formation in mid-count! There was no real point to counting the birds; I guess it was just a challenge.

The noisy pure-white birds circled a few times before heading off into the distance.

Soon after, the towing point knot was in my hand and the Dowel Dopero kite made a very gentle tail-first landing on the grass in front of me. What a nice feeling, having a good flight on the first outing and some decent imagery "in the can" as well!