With light winds forecast for this morning, it was perfect for the Dowel Dopero kite. On arrival at the reserve, the forecast seemed confirmed, with a light gusty breeze moving the twigs and leaves of surrounding tress. The time was just 10 am. This was deliberate, so there was no chance of the expected moderate sea breeze spoiling the show! 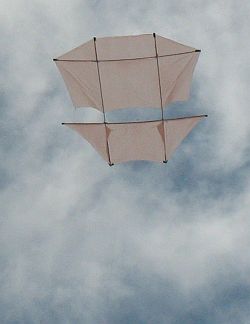 Finding a smooth green patch on the ground, I rigged the dopero quickly. A few little tricks helped keep the kite under control. For example, laying the heavy wooden winder over the upper horizontal spar and doing up the lower horizontal spar toggle first.

The nose was pointed into the wind, of course.

The new dopero e-book is going to need a cover shot, so I figured the nearby tree might make a good backdrop, with the dopero on a very short line.

Soon, the kite was bobbing around at around about the tree's height, while I positioned myself upwind of the tree.

Despite one or two unexpected landings in the lulls between the gusts, plenty of photos were soon on the camera's memory card.

Now for the fun stuff!

With the camera stowed in a pocket, it was time to move away from the tree and climb the kite a little. The Dowel Dopero kite climbed willingly, although still moving around quite a lot in the erratic airflow low down. Letting out just a bit more line would settle it down.

Soon, with 15 to 20 meters of line out, it seemed a good time to take some movie footage. The pale-orange dopero seemed to be trimmed nicely, with just a slight tendency to pull left in the strongest gusts. The kite exhibited some characteristic small yawing motions as the twin keels flexed this way and that in rougher air. (Yawing just refers to the nose swinging left and right.)

The next 15 minutes or so were spent slowly climbing the Dowel Dopero kite right up to 400 feet. Instead of any systematic method this time, I was pretty haphazard about it.

To start with, I just shook off a few loops of line at a time from the winder, while letting the line slip out with the other hand. This was done quick enough to make the kite descend for a while. Then, I would just hold on and wait for the kite to regain height. At other times, I just took off a few loops of line every now and then, during times when line tension was less.

Since arriving, the sky had been almost overcast, covered by just a few very large banks of thick cloud at around 4,000 feet. However, some long blue gaps had formed between the cloud banks. Also, patches of thinner cloud were present, which were letting a fair amount of sunlight through from time to time.

I enjoyed flying the dopero for a while, sitting on the middle of a see-saw in the children's play-equipment area. This was at one extreme corner of the reserve. Hence, there was ample room for the kite to stay out of trees in case of trouble.

The Dowel Dopero kite shifted about, responding to small changes in wind speed and direction. There didn't seem to be much thermal lift around. Despite high line angles and less-than-moderate wind speeds, the flying line tension was very firm most of the time.

One of those long blue regions finally drifted between the sun and the reserve. Bright sunlight bathed the local area. In fact, I felt it burning into my forehead—a foretaste of the coming summer months.

And then ... right on cue, only about half a minute later, the dopero rode a massive warm bubble of air right up as far as the flying line would allow it. Yes, vertically above my head! The Dowel Dopero kite stayed there for at least a couple of minutes. With no particular direction to call "up," the kite meandered this way and that and did a languid loop or two. The flying line bowed out slightly in the downwind direction, but there was the kite, straight overhead at about 400 feet.

Finally, the lift drifted away and was replaced with sinking air. After a touch of turbulence rocked the kite and caused a few erratic changes of direction, it settled down into a long slow graceful tailslide toward the ground. I just let it do its own thing and watched as it finally settled out at a 45-degree line angle, still in sinking air. The Dowel Dopero kite was pulling strongly, but refusing to climb.

Eventually, the sinking air passed too, and the dopero obediently rose back up to its accustomed 60 to 70-degree line angle.

Glancing around, I noticed the sky was somewhat darker in the upwind direction, so it seemed a good time to start bringing the kite down.

Leaving the winder on the grass, it was a simple matter to walk out downwind, pulling the line onto the ground, until the Dowel Dopero kite landed tail first just a couple of meters away.

Then it was out with the bow-line toggles, pull the shoelaces undone, slip out the vertical spars, and roll it all up. All this was somewhat faster and easier than the setup process.

What a great flight it turned into!

Then it occurred to me—what do people think when they come across someone hanging on to a piece of string which just disappears straight up into the sky? At first glance they might actually miss seeing the kite itself, since it is so far away, directly overhead.