Compared to the last time this Dowel Diamond went out to fly, average wind speeds today were a little higher. 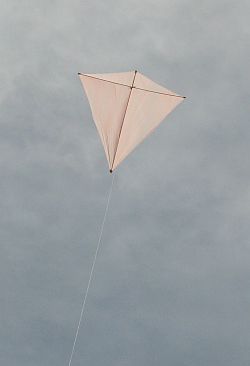 A light breeze shifted twigs and leaves around, with the gust strength creeping into the moderate range from time to time. But I was sure the diamond would cope, despite its new design suiting lighter winds than the original kite.

Rigging the kite was quick and easy; it was soon away, climbing strongly while I let loops of line off the winder.

At about 50 feet up, I paused the climb to grab the camera and take a few photos.

From there, I let the kite up to around 200 feet for a while.

After a few minutes at this altitude, it seemed the Dowel Diamond kite was being pushed to the limits of its stability, from time to time, in the moderate gusts. Wanting a more relaxed flying experience, it seemed like a good idea to just take it all the way down and adjust the bridle.

The bridle was still at the "maximum light wind performance" setting—as far back as possible in other words! So, I just slipped the sliding knot toward the nose by a centimeter or two to ease up the pressure in the sail. Off went the kite, more stable this time, and still holding good line angles.

While shaking loops of line off the winder with my left hand, I let line out by slipping it through my right hand.

The diamond was not pulling very hard at all, and there were no sudden gusts, so there was no danger of getting line-burn. I let the kite fly for a few minutes at a time at various altitudes, before finally seeing the black tab come off the winder, signaling 120 meters of line. That would do! A decent thermal would float the kite up to around 400 feet at that length of line.

The weather was warm and clouds were generally hazy and smooth, and fairly high. The wind strength seemed to vary from minute to minute, and thermal activity seemed fairly gentle today. The Dowel Diamond kite hung low or high depending on wind speed, but spent most of its time around 50 degrees of line angle, with not much line sag.

As wind speeds edged toward moderate, the kite would respond with a little fishtailing as the vertical spar flexed from side to side. The three-leg bridle kept the wingtips from waggling, unlike traditional diamonds with their two-leg bridles.

Although some video was already "in the can," I felt an impulse to get some more despite the high altitude of the kite. It turned out to be a good move, catching the kite on a long climb from around 200 feet to over 350 feet.

Also, wind shifts caused the diamond to track sideways across sky during the climb.

Initially, it was just an increase in wind strength that triggered the climb, but toward the end there was definitely some thermal assistance! It felt like I was tilting my head back until it was about to fall off.

The cloud cover was the only way to tell how the kite was moving. Sometimes I don't even bother to fly on totally "blue" days since the video would be boring!

Eventually it seemed a good idea to bring the kite down so we could get out of the heat.

On its way down, the MBK Dowel Diamond kite soared almost directly overhead from time to time, like when a delta is brought down. With the kite only 30 feet off the ground I took another photo of my 4-year-old Aren flying it from the winder. During a lull, I managed to get both flyer and kite in the frame. All up, a decent flying session was had with the Dowel Diamond!