Today we were hoping the Dowel Delta kite would not be prevented from flying, since the newsletter is going out soon! Rain had been forecast for this morning, and sure enough, there was a steady downpour during the early morning. However, around 10 o'clock the sky started to lighten up and the dead calm was replaced with the stirring of leaves on the trees and bushes around our home. 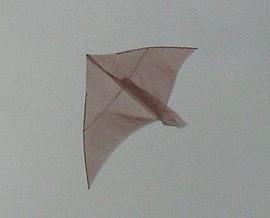 This was a good chance to get out and do a much-needed third session of test flying the new delta! It's been a bit of a saga with the first two outings showing up some faults in the design.

We arrived at the Wilfred Taylor reserve, with light gusty winds moving the treetops. The sky was still very cloudy, but clearing, with blue patches here and there. The big Dowel Delta kite was soon up; those shoelace ties are great!

Shoelaces are easy to work with and hold dowels securely in place.

Initially, the delta got up to its old tricks, leaning to the left and even doing complete loops once in a while. Obviously I had still not removed enough wood to correct the uneven curvature in the horizontal spar. Oh well, that's easily taken care of later.

To correct the imbalance, I tried pushing the horizontal spar through the central tie a centimeter or so, as a temporary measure. This increased the sail area to the left of the vertical spar just a little. This worked—but only with a fair amount of wind speed past the kite. If the kite started leaning left, I found I could straighten it up by pulling in line and loading up the kite. Later, when the delta was flying much higher, the wind was stronger at that altitude and the kite flew more or less straight without any input from me!

Another problem evident from earlier test flights was a tendency to "porpoise" badly when the kite was near the top of its wind range. After some observation and thought, it became clear that the problem was the flexibility of the vertical spar. Just a slight upward bend of the nose would cause a sudden pitch up. This would be followed by the dumping of lift, hence a nose-down movement again, as all the spars and sail distorted horribly.

Today, the kite was behaving much better in this regard since I had added a line from the nose to the towing point of the keel. Hence the vertical spar was now attached at three points and was very much stiffer in flight. Phew!

So, we eventually had the Dowel Delta kite up nice and high, with just over 90 meters of line let out. There it stayed for quite a while, exploring the sky a little to the left and right, porpoising just a little from time to time.

The leading-edge spars were bent rearward a fair way too. The air up there was fresh but smooth. I could relax a bit, after all, even though the wind strength kept the delta to an uncharacteristic 50 to 55 degrees. Delta kites usually fly steeper than that.

A big passenger jet flew overhead at about 4000 feet, its pale underside camouflaged with the patches of cumulus cloud all around it.

The aircraft was close to the line-of-sight to the kite.

Conclusion: The Dowel Delta kite should really be scaled down a bit so the 5 mm dowel is not under so much strain. I will eventually do this, and the result should be a stiffer, more efficient design. Of course, the extra loading might mean it won't stay up in very light winds. The Dowel Rokkaku is the kite for that!