Trimmed Out and Flying High

The new Dowel Delta kite had a testing workout in a moderate breeze and quite strong thermals today. Finally, the kite is flying straight, after I resorted to a little trick that also helps our little 1-Skewer Delta. A tail-let, fluttering away on one wingtip! 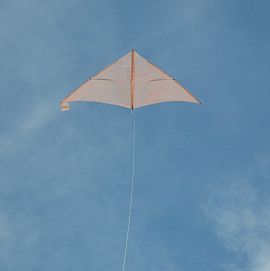 The problem with my new delta is unusual. It doesn't seem to be related to the stiffness of the leading edge spars. This is normally the problem with errant deltas, and makes an appearance near the top end of the wind range.

Instead, I suspect the problem was a slight kink in the vertical spar, which of course also affects the base of the keel. Hence, at just about any wind speed, the delta was getting steered over to one side! I really can't think of what else it could be.

Before we set out today, I had attached a tail-let. This was a very short piece of plastic taped to the trailing edge near the left tip.

The first couple of short flights seemed to indicate that more correction was required. So out came a bit more plastic, which I attached to the first bit with insulation tape. You can also see this in the photo!

The extra weight out there wouldn't hurt, since the kite needed more turn in that direction anyway; however, it's the aerodynamic drag that really counts.

Oops, I've got a bad habit of getting technical haven't I ;-)

The Dowel Delta kite was doing well, although wind gusts were bending the spreader horrendously at times. Since the spreader is free to rotate a little, it tended to bend straight back toward the tail end of the kite, rather than straight up as in a retail delta kite. This is sort of cool, since it moves the center of gravity back just when the kite could do with a bit more stability!

At ground level, winds were light and moderately gusty. Up higher, not only was the wind much fresher, but quite strong thermals were popping all the time. On one occasion, some of this spreader-bending drama was happening with the kite vertically above me! In fact, I just let the kite climb vertically for a while as it strained against the giant plume of invisible rising air beneath it. Exhilarating stuff.

The extreme operating conditions took their toll after a while. One of the shoe-lace ties loosened just enough to let a dowel bracket slip through!

All of a sudden, one side of the kite was sporting a 1/2 meter (1 1/2 foot) length of spreader that had slid through. Instead of looping crazily, the Dowel Delta kite actually carried on flying for a while. However, I had to get it down safely before it became uncontrollable. It did start to loop a few times, but would still fly fairly straight with the right amount of tension on the line. In this semi-controlled state, I just managed to get it to ground without draping the line over any trees. Phew! The kite only made it by a few meters.

Thankfully, the kite was undamaged. Hence it was a simple matter to retie the ties, as tight as I could this time, and relaunch.

It was a pleasure to walk back to where the winder had been dropped on the grass, slipping line through my fingers while I hovered the kite fairly low. With a decent amount of line between myself and the new delta, it was easy to hang on and let it float up, then rocket back up to 300 feet or so. Some time later, I let out the line to 120 meters (400 feet).

If I make another Dowel Delta kite, I will make sure the heavy end of all the spars is towards the rear end of the kite. Yep, balance a typical piece of dowel exactly in the middle, and one end will usually be heavier! As it is, the kite is only just stable, which makes recovering from a dive a bit tricky. Even with tension off the line, the tail end is reluctant to pendulum back toward the ground.

Eventually, with just a hint of fine drizzle in the air, it seemed a good idea to bring the Dowel Delta kite down. This took a bit of doing! Many minutes later, with more than half a dozen small piles of line on the grass, the orange delta flopped to rest several meters away.

Despite being slightly embarrassed about needing the tail-let on my carefully constructed Dowel Series kite, I must say it was a real pleasure to fly it right up to the legal altitude limit today! Hopefully, the flying will be somewhat more relaxed if I can pick a day with lighter and smoother winds.

At least the Dowel Delta kite has proven itself in conditions that would have wrecked the old one!