A Tale of Many Tows!

It seemed risky to take even the Dowel Box kite out today, since it could almost be called a "light-wind kite" along with the rest of the Dowel Series. For most of the day, fresh gusty winds had ruffled the bushes and trees near our house. 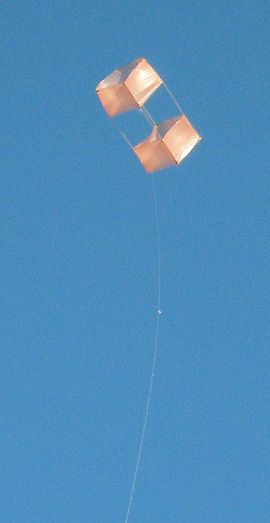 Later in the afternoon, the wind did seem to moderate somewhat, so out we went.

The large reserve was less windy than expected, but moderate-strength gusts were coming through. Perfect! There's always much faster air up high compared to ground level, at this location.

It proved difficult to get the Dowel Box kite to stay up, even after numerous short tows during those gusts.

The towing point was shifted a few times, as I tried to get the most out of the kite.

Meanwhile, some mid-level cloud was drifting by overhead, indicating quite a brisk breeze up there. After some time, even the ground-level gusts seemed to weaken as the sun dipped toward the horizon.

It was time to get serious! I walked most of the way across the reserve, determined to tow up as high as possible this time. If nothing else, I was getting plenty of exercise.

Now, most times in this situation, a kite only has to get just above treetop height to contact faster air and get away. But with a box kite... Anyway, the magic line length turned out to be about 45 meters (150 feet) today. Suddenly, the flight became self sustaining and it wasn't long before the line was really tight!

The Dowel Box kite flew at around 45 degrees most of the time and occasionally quite a bit higher in weak areas of rising air. When you do a lot of kite flying, it becomes clear that weak or small-scale thermal activity is everywhere, at any time of the year and in almost any weather.

Line tension varied a lot as the wind above 100 feet varied from the low end of moderate through to quite fresh.

Up until now, the kite had been parked in a rather blue section of sky, but then some mid-level cloud started to blow across. With this more interesting backdrop to the kite, it was time to pull out the camera for some more video.

I progressively let out line to 90 meters, maneuvering along the edge of the reserve to give maximum room for the kite in case of a failure.

You would think it would be easy letting out line, however, the high tension made it tricky! It was safest to actually lock the line around a couple of fingers as each 1/2 meter (2 foot) length went out. Yeah, yeah, I should be using gloves—at one point I fumbled and almost got a line burn on one finger!

In the photo up there, you can see the yellow 30 meter (100 feet) tag on the flying line. The 4x zoom of the camera makes it appear much closer to the kite than that.

The wind was even stronger higher up, and the kite was approaching its limits. There were curves everywhere—in the long spars, in the sail edges. From experience, the lower cross-spars would drop out and the upper horizontal cross spar would snap under compression if the kite was pushed too far.

The Dowel Box kite was still holding around 45 degrees and remained quite stable despite the wind speeds.

Tea time was approaching, so it was time to begin bringing the kite down. That was easier said than done! Winding the flying line onto the winder was out of the question, due to the heavy line tension. So, with the winder thrown onto the grass, I started hauling the straining box kite down. Small piles of line were left on the ground as I walked in a crosswind direction.

This was hard work! And it was very slow to start with, with the 50-pound breaking-strain line pointing nearly straight at the kite. The box kite was distorting under the air loads of the fairly smooth but brisk breeze.

Thankfully, the wind speed slowed just a little from time to time, making the process a bit easier.

With the Dowel Box kite down to under 200 feet, the lower cell didn't seem fully rigid. Oh-oh! Perhaps one or even both of the lower cross spars had fallen out. Bringing the kite down below 50 feet, it was clear that both spars had indeed disappeared! The vertical would have gone first. This would then take most of the tension off the horizontal one, which would have followed a short time later.

Having got a good long high flight to write up, I think it's time to retire this kite for a while! There's a bit of work now to get the Dowel Box kite airworthy again. That is, cross-spar brackets to glue, plus assorted small holes and slits in the sail to tape up. But hey, the whole thing's less than $5 in materials.