The sun had nearly set and the trees had stopped moving, but the Dowel Barn Door kite had a great flight anyway! As it turned out, there was a smooth and fairly steady moderate breeze above the treetops. This was a little unusual at this time of day. But then again, it's the middle of winter down here in Adelaide, South Australia. 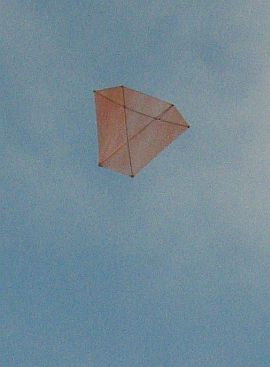 Rigging the kite was a snap, in stark contrast to my original effort at making this design transportable! The e-book for this kite has been duly updated.

Down low, there was just a very light and gusty breeze. It was just enough to float the Dowel Barn Door kite out over the damp green grass. Hence, I initially climbed out at 10 to 15 degree angles until 30 meters (100 feet) of line was out.

After this, I let the kite rise to about 45 degrees before continuing the climb. When the 60 meter (200 feet) marker went out it was time to just let the kite climb out to its maximum angle. And of course, you have to enjoy watching it do its thing up there for a while.

Despite the low light I then took some photos, with the kite holding around 60 degree line angles in the steady moderate breeze. Low rain clouds were passing overhead, confirming that there was plenty of wind speed up there.

A jet flew directly behind the kite, from my viewpoint. The aircraft was leaving Adelaide airport and was probably bound for Melbourne.

Talking about what else was in the sky, a squadron of small rapidly flapping birds—nine of them—took an interest in the kite as it climbed even further. That is, before two birds seemed to lose interest and broke formation to fly around on their own!

These birds circled many times, passing within a few meters of the kite each time around. They certainly were curious, as they followed the Dowel Barn Door kite up further as it continued climbing through 300 feet.

Eventually there was about 140 meters of line out, with the kite holding a 55-degree angle. Not much sag was in the line either! The wind strength seemed to vary a little from minute to minute. However, it was hard to imagine any thermal activity happening up there given the very cool temperature and the time of day.

At times the Dowel Barn Door kite pulled very firmly, suggesting that the wind speed was nudging the fresh range.

The kite was still leaning left a little despite having had some work done on the horizontal spar. I had removed a small amount of wood from one side to even up the curvature. Never mind, it just needs a little more. It should be a two minute job with the wood file, taking care not to touch the plastic sail! Anyway, the barn door still seemed to be showing a good improvement over its first flight several days ago.

The cropped photo over there is a little grainy because of the low light and our low-end digital camera's limitations!

With the sunlight fading, a spectacular light show was unfolding as the setting sun shone past great clumps of thick, tall cumulus near the horizon. After 10 minutes or so of flying in complete shadow, we started taking down the kite. Sunsets are fairly slow at this latitude, as the sun slides below the horizon at quite an angle from the vertical. So, there was no need to panic about the approaching darkness!

Cars were passing by with their headlights on while we were still bringing the kite down.

Finally, I was walking along upwind, towing the kite on only two or three meters (10 feet) of line. At this slow speed and high angle of attack (sorry non-techies!) the Dowel Barn Door kite oscillated from side to side, its tail end swinging like a slow pendulum.

I made sure the tail stayed just out of reach of my 4-year-old boy as he playfully tried to catch it!

This was another very enjoyable flight with the new Dowel Barn Door kite! It's so different from my first effort with its four extremely fiddly corner straps and ultra-bendy 4 mm spars.