From Tiny Toys to Big Floaters

The dopero owes its Spanish-sounding name to its origins in Pearson's roller kite. Put two such kites together side by side and you get a DOuble PEarson ROller! Note the capitals. Although only rather large versions of this kite are sold commercially, we thought it would be fun to do a few in smaller sizes.

Our little 1-Skewer version requires a tail, and is fun to fly in moderate breezes. At this size it is not a true light-wind kite due to the weight of its four bamboo spars. Being BBQ skewers, they come in a very limited range of diameters. Like "thin ones" or "oh, this lot are a bit thicker!" However, if you are careful not to add any unnecessary weight and avoid the thickest skewers, this little kite design flies great. It will readily get boosted up to high line angles on 50 meters of light flying line, at least with a bit of of help from a patch of rising air!

Next up in size comes the 2-Skewer version which has a great wind range for a homemade kite of this size. The four-leg bridle can require a little adjustment before the kite is perfectly trimmed. As with everything, practice makes perfect!

Finally, we started making larger kites like the Dowel version which is 1.2 meters (4 feet) from tip to tip. This one also has a four-leg bridle, which keeps the kite very steady and predictable most of the time. Like the Dowel Rokkaku, this kite also likes to go directly overhead when given the slightest help from warm rising air!

Down below is a photo or two and a video of all the MBK Doperos. This illustrates the end result, in case you decide to use our instructions to make one of these kites. 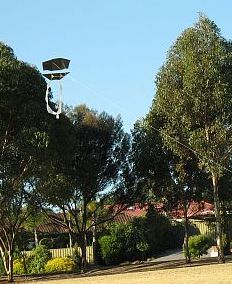 Here's the cute little MBK 1-Skewer Dopero. Don't try lifting anything with it! If the wind's too light, it has trouble lifting itself. However, with a few more kph of breeze, the tiny kite does much better—complete with two little keels and a four-leg bridle.

The original was made from black garbage-bag plastic, which actually looks pretty good in photos, don't you think?

Later, a clear-plastic version was made, since all the other 1-Skewer kites had clear sails at that time. However, it never flew very well.

Post-mortem? I hadn't noticed how much heavier the 3 mm skewers were, compared to the 2.5 mm ones in the original kite! As always, the lighter, the better—particularly with tiny kites. 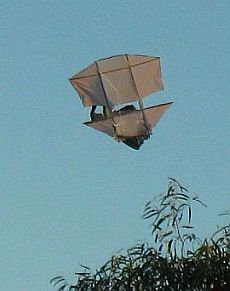 Finally, an orange plastic version was made, which also had a slightly larger sail area than the previous two builds.

A loop tail of black plastic went nicely with the sail color, and kept the little kite stable in moderate breezes.

We flew this version on 50 meters (150 feet) of 20-pound line. It doesn't need that strength, but we also flew our 2-Skewer kites on the same line.

I haven't been able to dig up a decent video of the last 1-Skewer Dopero, but here's a great one of the original: 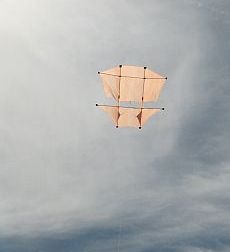 The spars, being made from skewers attached end-to-end, are no thicker than those of the 1-Skewer version. However, the strength is still more than adequate.

Hence, this kite can really show off in light-wind conditions! This did happen at a local kite festival one year, when everything else dropped out of the sky.

That is, before someone put up a hi-tech Cody sporting graphite spars and 1/2-ounce ripstop sails.

The video below shows our homemade dopero on a long line. So long, in fact, that I had to use full zoom on the camera. Hence there's a few wobbles! The wind was light, with occasional thermals helping to keep the kite high overhead: 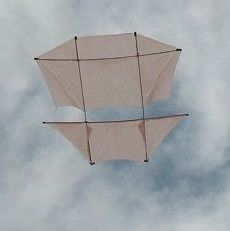 The largest of these MBK designs so far is the Dowel Dopero. With plenty of sail area, this one does well in light conditions despite the extra weight of dowel.

Size? It's about twice as tall as the 2-Skewer version, so that's about four times the sail area.

Compared to the 1-Skewer kite, the Dowel Series version has about 16 times as much sail area!

The video shows our original kite drifting around in light wind. The kite was low, and you can see how the keels kick the nose into line with the wind direction every now and then. Later, we let line out and allowed the kite to fly in smoother air up around 300 feet:

That's about it for this page on our dopero-kite designs. I hope you enjoyed the photos, videos, and info!