The breeze was apparently 11 kph gusting to 13 kph near the coast. But here, inland a few kilometers, the air was much more lumpy. Plenty of sunshine bathed the field. And the breeze strength often dipped to almost nothing. 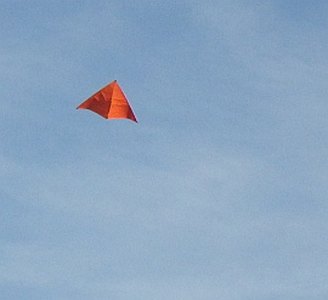 Launching the bright-orange delta was trickier than usual, as it would soon stall and spin one way or the other. In air that was barely moving fast enough to billow out the sail, any slackening of the line spelled trouble! My larger delta designs make good gliders in dead air, but not so with the 2-Skewer version :-|

Eventually, after a few somewhat embarrassingly forceful nose-ins, the little delta was more comfortable above tree height. Talking about trees, I realized just in time that I had too much line out—by about 2 meters (6 feet). Hence I shifted the anchor point away in a cross wind direction, by several meters.

The air was still quite tricky up there and the kite actually stalled and nose-dived all the way in from nearly 100 feet, trailing edge a-flutter! Tut tut, it's never done that before.

After a relaunch from where it had landed, the 2-Skewer Delta soared straight back up and put on a great display for a video clip. The kite hovered, descended, and climbed at various rates, depending on the erratic breeze strength.

So it was some OK flying in the end, in glorious spring weather.

OK, the title's pretty bad—but here you are ;-) So, the late afternoon was getting later, darker. And the breeze, much to my surprise, had freshened by a couple of kph at least. Well, well, that makes a change around this time of day.

For the first few launches Aren helped out, before being called inside. Ever hopeful, I remained out on the wet back lawn, launching the 2-Skewer Series kite from a resting place against a swing-set seat. These launches were spectacular, having only a meter or two on either side until the kite flew clear of the house roof corner on one side and tall bushes on the other.

With enough height there was just enough movement in the air to keep the kite swaying from side to side at the lower limit of its wind range. Inevitably, control was lost a few times and the hapless delta got dragged off the verandah roof during some of these episodes. Excitement. Danger. Of sorts.

Finally, I was able to get a decent length of the spidery 20-pound Dacron out. This put the kite right over the neighbor's fence. After some edgy flying—captured on video—a moment of inattention resulted in another loss of control and a somewhat uncomfortable period of scraping and banging across unseen parts of our roof. And it was  possibly the roof of our large shed as well, I don't really know.

Miraculously, the bright-orange 2-Skewer Delta kite survived unscathed. It popped into view then fell off the gutter as I continued to take line in. That'll do for today, I thought. Quit while you're ahead and all that.

2-Skewer Delta Dries Out, Flies Up

Winds were light but just enough for a good Skewer kite. For example, the 2-Skewer Delta. At least that's what the weather station indicated, at a location within just a few kilometers of the flying field.

Wouldn't you know it, the air seemed pretty dead as I pulled up in the car park. For the next 45 minutes or so, it was a waiting game, interspersed with highly optimistic attempts to keep the 2-Skewer Delta kite airborne.

At last, after a long pull-up on 60 meters (200 feet) of line, the kite contacted just enough moving air to stay up for a while. In fact, it seemed as though I had launched right into a weak thermal. The kite moved almost overhead and climbed slowly with very little line tension.

For 10 or 15 minutes I just left the delta to its own devices.

Eventually the delta simply dropped out of the sky. There was just not enough average breeze strength up there. However, the forecast was for strengthening winds over the next few days, so I held out hope and stayed. Sure enough, another chance came along in the form of some weak gusts as mild sunlight warmed the local area.

This time, the kite had no trouble cruising around at about 300 feet off the grass. As well as the slight improvement in the breeze, the kite was now dry from airflow and sunlight. The reduced weight helped the delta fly in a more stable fashion.

Not long after capturing a long descent and subsequent climb on video, it was time to leave.

But it pulled through. Two days ago, the sun shone and the wind whistled. It was a chance to punish the 2-Skewer Delta kite Mk2 in high wind, just to see what would happen!

The strongest gusts were pushing near 40 kph, although at shoulder height out in the middle I could only record 20 kph on the meter. The wildly swaying tree branches on the far side told the true story.

Near the upwind edge of the reserve, great swirls came through and made launching tricky, despite the ample air speed. There were huge changes in wind direction.

Anyway, a couple of videos were taken, one of which I might post on Facebook later. Even with its reinforced spine, the kite was forced into flapping for much of its flight time! The interesting thing was, at even greater pressure, the kite narrowed to a very low-aspect-ratio shape and went steady again—just for a few seconds at a time.

At no point did the kite get forced into looping. Good!

Amazingly, the spreader put up with all this to the end, possibly due to it being fairly close to the nose. And the beating was being shared by the leading-edge skewers.

It was clear that a more forward towing point would have helped since the kite was bogging down quite a lot, below 45 degrees of line angle. Never mind, I won't be changing the design since it is supposed to be a light-wind kite after all.

At least this version of the 2-Skewer Delta seems to be durable in unsuitable wind speeds. People will appreciate not having to repair broken skewers when the wind comes up a bit—or quite a bit!

Finally, the weather cooperated to allow an outing with the 2-Skewer Delta. An extra skewer had been glued onto the vertical spar or spine. The aim was to reduce or completely cure the oscillations that happen when the kite is pushed a bit hard in terms of wind speed.

The sun came out around the middle of the day, so the flights ended up being strongly affected by rough thermal air. Think, sudden gusts and lulls. At least the strongest gusts gave the kite a good work-out—although I had been hoping for a somewhat higher average wind-speed.

At one point it looked like the sail near the nose had been punctured by the bamboo. With a few centimeters of sail pushed back, the kite still flew fine! On landing, it turned out that the tape had simply worked loose. This was easily fixed with a bit more tape.

Well, there wasn't much sign of the dreaded oscillations, although I might take it out once more and try it in even stronger wind. Although the little orange delta was up over 100 feet, it was just possible to hear the sail fluttering as it powered through the gusts.

I forgot to take an anemometer reading, but it was gusting to 19 kph before I headed out. That was according to two online weather stations. The average of the nearest two stations is useful, since we are situated smack in the middle, geographically.

This was another spur-of-the-moment flight. Having just completed the 2-Skewer Delta Mk2, the thought sprang to mind to go out into the darkening dusk and test the breeze—not to mention the kite itself!

The first pull up, utilizing about half the length of our rear lawn, was a calculated risk. If the kite was unstable without a short tail, like the original, it could very easily loop straight into the peach tree before gaining much height. That would be recoverable, but not the best way to treat a spanking-new kite.

To my delight, the black-keeled orange delta deftly flitted up, managing to miss all obstacles. It was a rocket-like launch from being leaned up against the tomato-patch trellis. In a moment, the kite was above roof height, where all of a sudden it found no breeze to sustain flight. After a hasty pull in, the kite flipped and dove to the grass.

Aren, who had been timing on his stopwatch again, chimed in with "6 seconds Daddy!"

Several more flights followed. "6 seconds again" ... "11 seconds" ... "31 seconds!" By now it was clear that the small delta was well behaved and would flex its spars evenly before accelerating in a straight line—in the direction pointed, like a fighter kite.

There did turn out to be a slight breeze up a bit higher, in a direction which took the kite over the neighbor's yard. Aren was a little nervous about that, but all was under control on the fairly short line of only 10 meters (35 feet) or so.

Just a few seconds of seeing the delta sitting there in fairly smooth air was convincing. This kite should soar to any height and stay stable in light winds!