Info for Flyers Plus a Short History

The staff at any kite shop will tell you that Dacron (a trade name for a type of polyester) is ideal for flying single-line kites. Compared to cotton and nylon lines of the same strength, it is lighter and thinner. Also, its high melting point means that it resists abrasion. That's handy for if you get in a tangle with someone else's flying line! 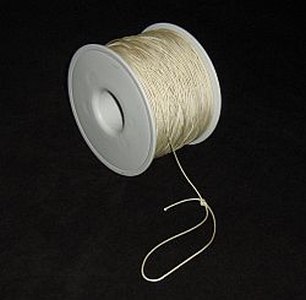 Some Dacron as delivered

There is some stretch in the material, but this is of no real concern when flying a single-line kite. If you ask me, there's nothing wrong with a bit of shock absorption in gusty winds!

The kites flew high with much less sag than a line made of cheaper material would have. Mind you, sharing a single flying-line among several kites makes the cost seem more reasonable!

The occasional tangles did still happen, but for us it was mainly due to carelessness.

You know, you're in a hurry winding up the line and you don't take enough notice of some resistance.

Next thing you know, a small pile of loose line has arrived at your hand in the form of a tangle! Usually, it's still fairly loose and it only takes a few minutes to sort out.

We flew most of our MBK kites on braided Dacron. The only exceptions were the Paper Series and Indoor Series designs which fly on polyester sewing-thread :-)

The History of Dacron

To make it more digestible, how about a list! Here we go:

You could spend 30 minutes or so wandering the Web to find all the above info in several places, often buried in long paragraphs. But I suspect you would rather just glance at the list to take it all in, in under half a minute!

There's my roll of 200-pound braided flying line up there in the photo—in its natural color.

A long paragraph of technical data would be hard going, so here's another list:

Finally, here's a not-so-technical fact... There are more uses these days for this synthetic fiber than you could poke a stick at! In my view, by far the most important one is for tethering single-line kites to terra firma ;-)