The Berkeley Kite Festival is one of the longest-running public events in California, USA, being held for the 22nd time in 2010. The event, started by local kiting identity Tom McAlister, has grown to become a major crowd-puller with its large and colorful displays of kites. 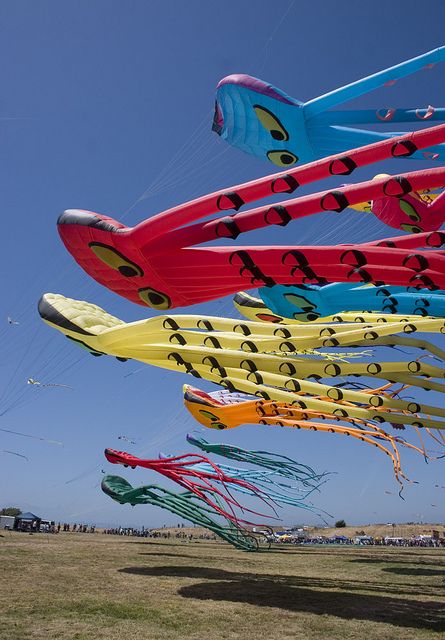 Whenever writing up an event like this, it's always interesting to figure out what makes the event unique among all other such festivals.

Well, in this case you don't have to think too hard! How can the headline act be missed, since it seems to return bigger year after year...

I'm referring to the OCTOPILE of course! This involves who knows how many hundreds of square meters of ripstop nylon, floating aloft in the form of giant octopi! Tentacles and suckers wiggle and writhe in the consistent moderate winds that sweep across the Berkeley Marina and nearby parklands.

Check out the photo. How's that for a closeup of those magnificent octopi at the Berkeley Kite Festival. Try this—close or cover one eye, to trick your brain into making the photo 3D. It works!

Speaking of the park itself, here are a few details of this impressive kite-flying venue:

Like many big kite festivals, it's predictable that the activities or demos on offer include the following:

This level of variety really helps to involve or interest nearly everyone who attends the Berkeley Kite Festival!

Oh, one other thing... What is it that separates seaside festivals from those inland? Kite surfing of course, and for those interested in checking out some of these large powerful kites, there are plenty of opportunities to see them in action down at the beach. It's something that takes a bit of training to become proficient.

I checked out a whole bunch of these online and guess what they mainly feature ... the Octopile, not so surprisingly. Year after year it's there, with a noticeable increase in numbers each time!

In 2006, there were at least eight. A 2007 video featured at least 12 octopi, with some closeups showing off the sucker artwork on the tentacles. In 2009, someone posted a video featuring at least 14 of the wide-eyed floating monsters. And in 2010, there were no less than a record 22 in the Octopile!

Overall, you could say that the online videos cover many great camera angles on these kites. Also, people have made the effort to match the visuals with appropriate high-quality soundtracks. Even so, wouldn't it be an experience to actually stand out there in the field right underneath those things. I wonder if the sail materials rustle quietly in the wind.

Confused by that title? Well, after combing through some recent history of the Berkeley Kite Festival, two things popped out at me since they already feature on this site:

First, Ray Bethell made an appearance at the 2007 event. It wasn't hard to spot those three large two-line deltas being flown all at once by the one person. It would have been a real treat for the crowds nearest him on the day. During his lifetime Ray was a real perfectionist and tried hard to get better even as he performed his routines. Amazingly, after becoming completely deaf he still managed to keep in synch with the music. For each routine, someone would alert him to when the music track started.

Second, seeing a rokkaku kite battle in one of the event programs reminded me of the time we managed to capture an entire rok battle on video at our local kite festival. It was a real hoot, with little white roks bobbing around in mortal combat and contestants sprinting and falling over each other in the sand! The soundtrack captured the entire real-time commentary too.

The kite team whose efforts make the biggest show are not a kite team in the usual sense. That is, they don't fly multi-liners in formation or precision maneuvers. They are the Berkeley Kite Wranglers, who operate a fleet ... errr ... gaggle ... ummmm lots of huge inflatable single-line kites! Many of the biggest and most well-known creature kites are likely to be seen when these guys do their stuff. But of course, the Octopile is their specialty! The sheer size and spectacle of their constantly growing collection of super-sized octopus kites wows the crowd year after year.

Another team associated with the Berkeley Kite Festival is the Bay Area Sundowners. This utterly professional precision-flying kite team performs in various locations across the USA and overseas. In fact, I got a good sense of what they are about by watching a video taken in Dieppe, France. This footage featured these guys handling four stacks of delta stunt kites with no less than 13 kites in each stack! Enhancing the synchronized motion of these kites were their long single-ribbon tails. Awesome stuff. The team can be hired in various configurations, right up to an eight-person team—if you can afford them!

Team AirZone is a four-man outfit that specialize in flying dual-line deltas in any weather. Well, they fly in a wide range of wind speeds anyway. This is achieved by selecting one of three kites for the day, depending on wind strength. Further fine-tuning is achieved by selecting line weights and even adding a little air-braking to the setup! Fascinating. I'm familiar with airbrakes, having flown full-size sailplanes in younger days, but airbrakes on kites... Now that's a different concept!