Very few designs beat the Baby Bat Kite from Gayla for long-term popularity. Modern versions of this little kids delta have hardly changed from the original. 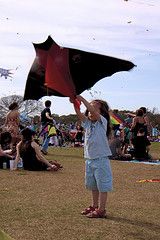 You can still see this iconic design promoted here and there as an ideal starter kite for kids! Also, particularly in the USA, older kite flyers still reminisce about the timeless Baby Bat.

This brings me to two other related kites from the same company. I might as well mention them, since they are based on a very similar sail outline.

Also, the Super bat had a somewhat more realistic "head," if you could call it that! See the photo.

The other one was the Sky Spy Kite, which had similar "monster eyes" to the others, except on a plainer-looking white sail.

I guess the emphasis was those ghoulish eyes, hence the name. Spying from on high, in the sky, logically enough.

However, I'm not going to recommend the latest Super Bat design on Amazon, since the reviews are mixed to say the least!

Right from the earliest one, the sail was jet-black plastic. It had a scalloped trailing edge to give it that "bat" kind of feel.

As already mentioned, two "monster eyes" adorned the nose area of the sail. Complete with livid red veins, which, if you looked very carefully, actually spelled out the name of the company that created them. Some people out there weren't aware of this quite subtle detail for many years, even decades!

A generous keel was intended to keep the Baby Bat kite stable. I suspect though, that quite a few would have swerved into the ground at high speed during enthusiastic handling by child flyers! The standard flying line was generally 60 meters (200 feet) of cotton or twine, packaged with the kite.

The earliest of these kites used dowel rods as spars. It seems this was still the case in the early 80s, but at some point a switch was made to using plastic spars. The very earliest Baby Bats are now worth a lot more than the materials! Apparently, mint condition examples from 1972 and 1973 have fetched close to US$100 when auctioned.

Check out the Gayla kite memories of a blogger who's done a good job documenting the 1970s obsession with these plastic designs :-) The long-lived Baby Bat's in there too of course. 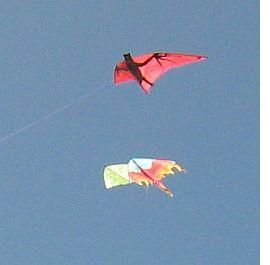 This was a personal favorite I saw at the Adelaide International Kite Festival some years ago. There wasn't much to it really, but this somewhat pathetic little flapping kite hit my funny bone.

There it was, chin up, gamely trying to keep up with all the other big, impressive festival kites.

The black-and-red bat could only manage a 40-degree line angle, on its very modest length of flying line. Anchored to the jetty, it seemed out of place. It wasn't big, pretty, or graceful!

Not surprisingly, this little kite drew the occasional chuckle from people walking past over the sand. Whoever owned this kite probably had no idea of just how significant its contribution to the festival actually was. Variety counts!

On another occasion, at the same kite festival but another year, we saw a rather large bat design in action. The crowd loved it when the wind picked up and the kite started to flap! Once again, the kite was anchored to the jetty on a fairly short line.