Airplane kites aren't model aircraft, but a novelty kite like this looks enough like the real thing to put smiles on kids' faces!

These quite realistic flying toys are a 21st century offshoot from the "small model aircraft for kids" scene of earlier decades. We've seen a few at the local kite festival. 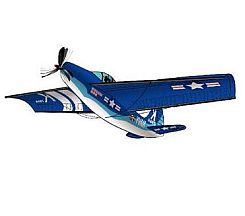 I did a spot of research (when this page was first written) to give you an idea of the variety that was available.

If I were to try and sum up modern airplane-style kites, it would go something like:

"Fairly realistic nylon and fiberglass kites that are shop-bought and occupy the bottom 1/4 of the overall price range for retail kites."

Would you like more detail? Of course you do. Purely from a kite-shopping perspective, these kites were:

Except for being 3D, that list probably sums up nearly all the retail novelty kites for children that I came across, come to think of it!

As time goes on, the variety is most likely to just increase.

From a looks perspective, these kites are somewhat unique in that they achieve more realism than most other categories of kids kites. For example, creature kites or ship kites. This might have something to do with the fact that airplanes are designed to fly too. Actually, the same could be said for bird kites. 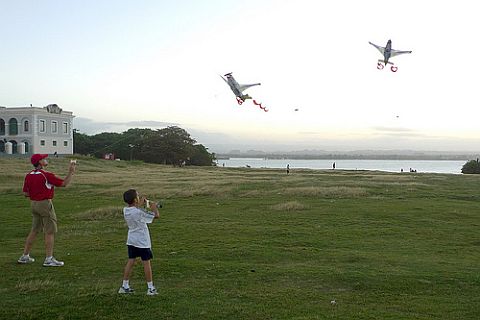 Here's an interesting point. The most seamless marriage between single-line kites and model aircraft would have to be the delta-winged airplane kites! Both aircraft and kites have a delta class, so it's not surprising that kites based on such aircraft can both look good and fly well.

In aeromodeler's language, most airplane kites could be termed "semi-scale". This means that the kite is a good representation of the real thing, minus all the finer details like tire treads, cockpit detail and so on. Others are somewhat cruder, and the aeromodelers would call them "stand-off scale". In other words, stand some distance away and the model looks something like the real thing!

The main departure from reality is the single-surface wings of these kites. They just work better in this application. Also of course, they are easier to manufacture. Sometimes the wings are cambered like the very first heavier-than-air aircraft.

So Many Aircraft Types

Just about every aircraft which could be called "very famous" is represented, regardless of era or type. The marketers have put some thought into which types get the nod for production! For example, here's a list of some typical novelty kite products:

How's that for variety! Even so, most people who are not aviation enthusiasts would still recognize many of those names.

Creative designers have taken advantage of some uniquely kite-related ideas, to add to the basic "aircraft" concept. You might see an airplane kite with

On that last point, I don't think these two-liners would be any match at all for a purpose-built stunt kite! More likely, the marketers realize that kids are thinking "hey, you can steer it!" and hence might be more likely to buy ;-)