This 3-Skewer Sled kite is a pleasure to fly since, so far, it copes with rough air just as well as any flat or bowed kite. This is over a decent wind range too, although it might be some time before I can really determine just how much breeze it can take. 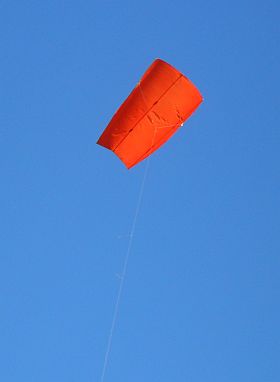 Down at the reserve, the first few flights were short since the breeze down low was light and fitful. The pressure would disappear from the sail almost completely at times, causing the sled to float shapelessly to the ground. The kite even turned itself inside out a couple of times!

Higher up, the wind was quite gusty and often seemed to be moderate in strength. It wasn't long before I managed to get the kite up a little higher and catch some of that stronger breeze. On a whim, I decided to let out some line very quickly, letting it spin straight off the winder for a couple of seconds. Not really the thing to do with a sled, but it would be interesting to see how this one coped!

Well, the 3-Skewer Sled kite promptly turned itself inside out, so I had to take it down and relaunch.

The wind strength had picked up a little by this point, so the sled was soon straining away on 20 meters (70 feet) of line. A few photos and videos were taken while the winder was securely under one foot. It was a pity about the cloudless sky, which will make for fairly boring video footage!

I hadn't got around to shifting the bridle knot since its first test flight quite a few days earlier, so the kite still pulled to the right a little. After bringing it down and shifting the knot on the bridle loop at least a centimeter (half inch) to the left, up went the bright-orange sail again.

To make more room for a longer line, I started backing away upwind to the edge of the reserve. There, on a grass-covered mound, the wind meter was soon set up and whirring silently on its small tripod.

The earlier bridle adjustment didn't seem to be doing much. The 3-Skewer Sled kite was still tending right from time to time, when under excess air pressure. Then I thought, well, it's a good thing in a way. It means beginners won't have much trouble with getting the knot position "close enough" to get plenty of flying out of the kite. So, to achieve perfection, a small extra piece of plastic might have to be attached to the trailing edge, near the left side-spar. A tail-let in other words, but this time I might try something wider and smooth in outline, just for looks. You could call it lop-sided beauty, perhaps.

Or, to avoid any asymmetry, all three lower bamboo skewers could be kinked just a little, in the same direction. It'll be great if it works!

The wind direction and strength both seemed to be varying quite a lot, which was a strong indication of thermals. With no clouds, we call them "blue thermals" here in Australia.

All the photography had been done so it was time to let out much more line. Some of the line would have to be wound back in rather quickly if anything went wrong, since the kite was now within reach of trees and a busy road if it lost too much height.

The bright-orange 3-Skewer Sled kite floated up and down in response to wind-speed changes and thermals. Those two separate effects were hard to separate at times. Finally, the sled went right overhead, pulling firmly in the strongest patches of lift. It was all thermal on that occasion, no doubt about it!

For the very first time since launching, the kite did a complete circle to the right, pulling the line close to vertical the whole time.

While on this line length I would hear the occasional comment from other people using the surrounding park lands. "Look how high that kite is" ... "Mummy, can you get me a kite that goes high like that?" :-) ... and so on. Several minutes later, the kite descended to its usual 50 degrees again.

With my allotted time running out, I started winding in slowly, then somewhat quicker when tension decreased. Under 100 feet, the overall amount of tension dropped off noticeably. Finally, with the short part of the bridle line in hand, the sled flopped to the grass just in front of me. It was time to pack up and head home for afternoon tea.

The trusty Windtronic meter recorded an average of 4.1 kph near the ground, with gusts to 14.1 kph. Meanwhile, according to an online weather site, winds over the airport (around 10 km north of here) were about 13 kph gusting to 20 kph—measured at several meters above ground, I'm sure! When perfectly trimmed out, the 3-Skewer Sled kite should handle winds of 5 to 25 kph and perhaps even 30 kph. That's a very useful wind range.