After waiting several days for some better weather to fly the 2 Skewer Sled kite, today seemed to fit the bill. Even so, the breeze seemed a little on the gusty side when we arrived at the reserve to fly. Hopefully the gusts were less severe higher up. That's where this kite was going to fly! 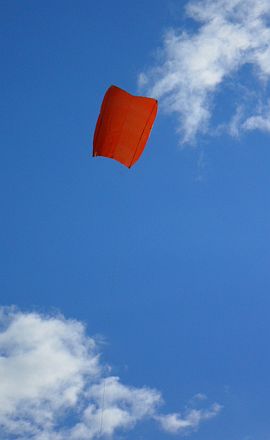 From the center of field, I put the small bright orange sled up on a short line for a few photos. The wind was not as light as hoped for, but the photos were taken. From there, it was just a matter of walking backward and letting out line.

Occasionally, the kite would collapse and reinflate again. Eventually, I just let it fly for a while on about 50 meters (160 feet) of line.

This 2-Skewer Sled kite seems to settle out at an angle of 55 to 60 degrees with a breeze of about 3 to 5 kph.

The kite is very stable but prone to collapse when gusts accelerate the kite upwards quickly. Fortunately, it is also quite willing to reinflate again by itself!

Adding tails should help to kill the sudden accelerations, but will make the kite less efficient. In other words, the kite will not achieve quite the same line angles as it would without tails. But, it could be a small price to pay for some extra spectacle!

With about 5 kph of breeze powering it, the MBK 2-Skewer Sled generated enough pull to slowly move the heavy wooden winder across the grass. Plonking my green kite bag on it was enough to hold it though.

Gradually, some more line was let out—while keeping an eye on the kite's proximity to one or two tall trees in particular! Some video was taken with the kite on about 50 meters of line and the sun not far away to the kite's right.

Despite being winter, the sun was out and hence some weak thermal lift was about. From time to time the kite would be affected, soaring higher than the usual line angles. There was also a rather sudden descent in a pocket of sinking air. After losing 100 feet or so, the sink disappeared, the line tightened up and the sled went back to its original height.

There were only a couple of times when I needed to walk out to relaunch. The rest of the time the 2-Skewer Sled kite managed to save itself from a landing! Either that or a little line-tugging resulted in the kite popping open again. The times that the recovery was very short-lived were probably the times the sled managed to turn itself inside out before popping open. It really likes to have those spars on the top!

This sled often descends quite slowly in the collapsed state. The plastic weighs almost nothing and the skewers are very light too. Also, the plastic can still produce a small amount of lift, surprisingly, if both skewers end up roughly parallel. Otherwise, the kite tends to spiral in one direction, and can need a few tugs on the line to pop it open again.

While the long line was out, there were a number of spectacular climbs from low down to over 250 feet—in seconds! I kept a close eye on it and tried to keep the upward speed just below the point where it would collapse the kite. This would involve letting out line or walking toward the kite immediately upon seeing any extra upward acceleration.

As a satisfying end to the flying session, winds smoothed out for a while and the sled flew steadily above 200 feet for several minutes. Looking at the Windtronic wind meter, I saw that the breeze had averaged 3.2 kph close to ground, with a maximum gust of 6.3 kph.

In the right conditions, the 2-Skewer Sled kite should rarely collapse and will fly high and stable. So best results will be achieved with very-light-to-light wind and fairly smooth. You could try slightly heavier spars and/or adding twin tails to reduce the kite's sensitivity to gusts.