Pushing the Envelope in Fresh Winds

The 2-Skewer Rokkaku kite tested its 20-pound line during a high flight in moderate winds and weak thermals. In fact, on feeling the wind on my face, I was fully expecting to have to pack up and return home soon after getting the kite in the air. However, the trusty light-wind rok was up to it—just! 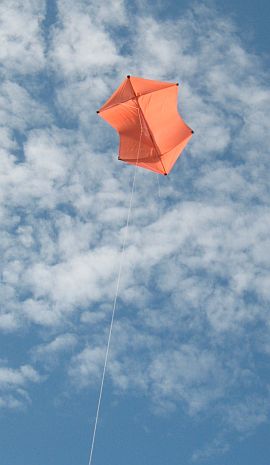 Cloud cover was mainly mid-level, with a few fairly large cumulus visible in the distance.

We spent a few minutes with the 2-Skewer Rokkaku kite on a short line, to get some photos.

Moving slowly upwind, it was tricky to let out line slowly due to the frantic pull of the stressed-out kite as it ventured higher and into even faster air.

At 200 feet, the rok found less turbulent air and was pulling nearly all the sag out of the 20-pound flying line! I'd say it was almost continuously in the top quarter of its wind range up there.

The line angle was roughly 45 degrees, instead of the usual 60 or 70. This was entirely due to the wind speed. The rok's sail was heavily distorted much of the time, and this made the kite less efficient and kept it dragging away at lower line angles. Just look at the photo.

After a while my 3 1/2-year-old son Aren and I had reached the far side of the reserve. A couple of times, Aren asked to hold the line. To his surprise, he could barely hold it for a few seconds using both hands, before I would come to his rescue!

The sun was gradually getting lower in the sky, and there did seem to be a slight moderating of the wind strength after a while. The 2-Skewer Rokkaku kite gamely managed to creep up to around 55 degrees. Even so, stronger periods would set the line vibrating.

With my ear close to the line, it was possible to hear a high-pitched whistle from time to time.

A late afternoon thermal passed through, which boosted the rok right up to 65 or 70 degrees of line angle for a minute or two. That would have taken the 2-Skewer Rokkaku kite to around 400 feet altitude. Line tension remained high the whole time though, which is different from the usual light-wind thermalling experience with this kite.

To our west, a passenger jet climbed out from Adelaide Airport and headed our way.

By the time it passed directly overhead, the jet was probably between 3 and 4 thousand feet up. The pilots would not even notice the tiny orange speck flying below them, I don't think.

When the time came to leave, it was a bit of a job getting the kite down! I didn't want to just wind straight onto the wooden winder with such high tension, so I pulled the line down onto the grass.

Eventually, all the line was down, and Aren obediently held the nose of the kite to the grass so it wouldn't take off again. It then only took a minute or two to quickly wind all the line back on to the winder.

Although the 2-Skewer Rokkaku kite had struggled a bit, even looping a few times, the outing still turned out to be enjoyable.