Rok Rockets Up, Aided by Thermals

An opportunity came up to pop out with our 2-Skewer Rokkaku kite for 30 or 40 minutes. The breeze outside was light and warm, and it didn't seem too strong for the smallish rok. This kite loves light winds, but goes downhill quickly as the wind strength approaches moderate! 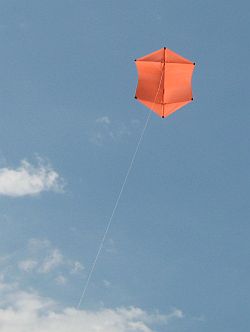 On arrival at the reserve, the wind still seemed OK. Cumulus clouds billowed in the distance, and a few other higher-altitude clouds covered some of the sky as well.

I attached the kite to its 20-pound line and we donned our Cancer Council hats and sunglasses.

The smallish rokkaku kite popped up quickly. Soon it became clear that the rok was straining away in the top half of its wind range most of the time. We got the photos out of the way quickly. After all, it takes time to climb a kite to 400 feet and then get it back down again.

Aren, my 4-year-old son, had a turn flying the kite, although he did complain a couple of times about how hard it was pulling.

With the imagery in the camera, I let out line slowly, while the kite stayed between 60 and 70 degrees of line angle. By a fluke, I think we caught a thermal right then and there.

The orange rok pulled hard the whole time, despite the steepness of the line angle.

Up higher, perhaps on 60 meters of line, the 2-Skewer Rokkaku kite was still pulling hard. However, it was a struggle to maintain those high line angles. As gusts surged through, the rok looped to the left a few times in protest. It didn't feel right at all, so I brought the kite down and shifted the towing point forward by 1 or 2 cm. Then we tried again.

This time, I had a bit of fun floating the kite out across the field at an altitude of only 3 meters or so.

However, after a while, it wasn't easy to keep releasing line quickly enough in the same controlled way. Hence the kite started to climb slowly. We were just using a simple winder.

After this, I let the rok climb out at a 40 degree angle for a while. Finally, I did some quick releasing, just letting the line fly off the winder by itself. The rok floated off downwind at around 200 feet. Oops, there goes the last loop of line! I hastily wound a couple of turns back onto the empty winder.

The 2-Skewer Rokkaku kite behaved well, although its sail sides curved in for several seconds at a time as thermal gusts put extra pressure on. The rok climbed fairly high, but never went overhead due to the average wind strength being just a few knots too high. Actually, this was just as well, or the kite would have been around 100 feet over the legal limit.

We only had a few minutes to enjoy the high flying before it was time to bring the kite down. A golfer had arrived and was preparing to hit off a few balls. He was keeping an eye on us and the kite.

Due to plenty of tension in the line, it took some time. I alternated between winding on under tension, and pulling long lengths of line onto the grass so it could be wound on under no tension. The winder coped since it's pretty sturdy.

It was quite a short outing but never-the-less enjoyable. And it was good to see the 2-Skewer Rokkaku kite strut its stuff once more, carving arcs in the sky at 400 feet!