On a Taut 70 Meters Under a Leaden Sky

It seemed like a reasonable day to take out the 2-Skewer Diamond kite, with barely any movement in the bushes round the yard, but the occasional moderate gust was coming through. The skies were almost totally overcast, with glimmers of distant blue sky to the west. 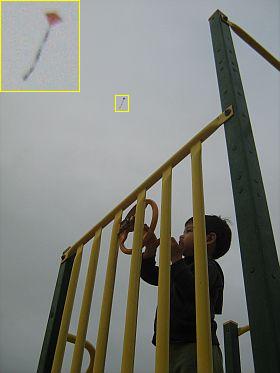 No rain was forecast just yet. And yet, after pulling up at our favorite flying reserve, there were just the tiniest spots of rain peppering the windscreen.

I decided to stay in the car for a few minutes to see what would happen.

The very light sprinkle soon stopped and Aren and I made our way to the middle of the grassed area with the kite.

It was a little tricky getting the diamond to stay up in the lulls, so I adjusted the towing point well back. Bad move! Probably because of the rain in the general area, the wind started picking up again and squally little gusts started coming through.

The 2-Skewer Diamond kite now needed a more forward towing point, so I brought it down and made the adjustment. This kept it happier, and it stayed in the air much longer, looping to the right whenever the gusts got too strong.

With about 40 meters or so of line out, I handed the winder over to 3-year-old Aren. He enjoyed flying the kite for a while, before getting bored and treading on the flying line with his foot to see what would happen!

After this, I let out even more line and moved back to the far side of the reserve to give the kite a bit of room in case it came down. It flew by itself for the next 40 minutes, with the line wound a few times around a small tree trunk.

Roughly 70 meters of the 20-pound line was out now.

Having just finished putting in the wind gradient feature in the MBK Kite Game program, it was interesting to witness what happened next!

The southerly wind was almost too strong for the 2-Skewer Diamond kite, causing it to loop frequently and hence stay low. However, time after time, it would descend into the wind gradient just a few meters from the ground and then recover in the slower air, flying straight back up to 10 or 20 meters—all by itself. I was half expecting to have to go out there and relaunch it, several times.

However, the rainy weather was drifting further and further away, and consequently the winds died down a little and smoothed out. This allowed the small orange diamond to soar much higher and really show what it was made of.

Soon the kite was flying at between 50 and 60 degrees of line angle, with not much slack in the line at all. At that height, it seemed the breeze was moderate rather than light.

It was great to see the diamond flying well.

It seems like a long time since it was first made and tested in our backyard. I've put a small yellow box around it in the photo up there, with a corresponding enlarged image in the corner. Aren is pretending to fly a plane! More rain was threatening to the south, so we brought the 2-Skewer Diamond kite down rather than risk getting caught out.