Looking out the window earlier this morning, things did look promising for flying the 2-Skewer Box kite! Yesterday, the forecast for today was for winds approaching 20 knots around midday. Just by myself, I hopped into the car and went down to the Wilfred Taylor Reserve. 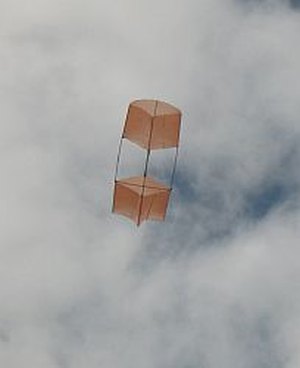 It seemed a good idea to assemble the kite on the passenger seat, sheltered from the wind.

Out on the field, the kite soon proved that it flew, but a few adjustments were needed to get the towing point right. With this sorted out, there was still a problem.

The cross-pieces tended to fall out when I dangled the kite to catch the wind! Some redesigning will be necessary here. Perhaps I should make the 2-Skewer Box kite ready-to-fly like all the other 2-Skewer Series designs. It's certainly small enough to transport around that way.

Since this was the first flight, I had come prepared with insulation tape and scissors, just in case. Hence it only took a few moments to secure the cross-pieces to the main spars with small rectangular bits of tape. Just enough was done to prevent the cross-pieces from slipping along the spars. The tapes are not even visible in the photo.

With lulls from time to time, it took a while before the 2-Skewer Box kite could be climbed high enough to catch the more consistently strong breeze higher up.

Then the magic happened.

Firm tension came on the line and it was easy to climb the kite further, up toward the ominous gray undersides of the puffy overgrown clouds not that far above.

The considerable air pressure on the sails was pulling the tips of the main spars toward each other. With the cross-pieces acting as fulcrums, this bowed the main spars out near the middle. Just have a close look at the photo up there!

After the kite reached 100 feet above ground, it was a quick ride all the way up to 300 feet or more as all 150 meters of 20-pound Dacron went out. The line tension was high, not because it was a big kite, but because of sheer wind strength!

Most of the time the 2-Skewer Box kite stayed between 30 and 45 degrees from the horizontal, with not much slack in the line at all.

Given the cool temperature and increasingly overcast sky, I was a bit surprised when some thermal lift came along! The small box kite floated right up to an angle of 55 degrees or so, and some of the tension in the line disappeared while it was up there. On another occasion, a small bird weaved slowly upwind, well below the kite. Perhaps it was hunting for insects in the slightly warmer rising air, as birds do in more summery weather.

The kite seemed to be doing just fine on its own, so I wound the line a few times around a nearby sapling and went back to the car. For one thing, it was warmer in there!

The wind direction was ideal, blowing straight down the length of the reserve from the west. After 15 minutes or so, a few tiny spots of rain appeared on the windscreen, then dried off. I didn't think much of it, since not much rain was forecast. However, another 15 minutes or so later, I glanced toward the west and realized suddenly that it looked much different to the eastern side!

The sky over there had become a very ominous smooth gray, with limited visibility. I had a hunch that rain was only minutes away, so I got out and started bringing the kite down.

Within seconds, not minutes, my back started to get damp from small rain drops. The kite resisted coming down, as though it was having far too much fun up there! Besides walking out to the kite, I also pulled a lot of line in, leaving it lying on the grass.

Finally the 2-Skewer Box kite was down, cross-pieces out, and stashed behind some rubbish in the other car park. I went back to the winder, undid it from the sapling and wound on all the line as fast as I could.

The rain got a bit heavier, before the kite was stowed and I drove off.

So that was it—a fine first flight for the 2-Skewer Box kite, despite those minor cross-piece hassles. Also, it put up with some quite severe stresses while it was pulled down in a hurry. During that time, the wind speed actually increased some more, as the rain squall hit!