Sitting Pretty Above the Wind Gradient

"Sitting Pretty" is just a saying, and it's probably a stretch to call our 2-Skewer Box kite "pretty." Never mind, at least it flies great! Rain was forecast for this morning, but it hardly rained a drop despite promising gray clouds. 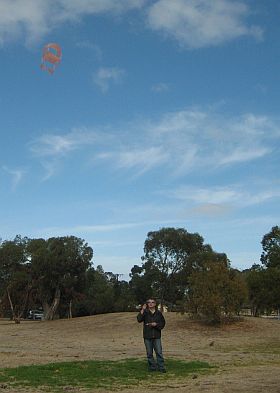 As weather conditions started to clear, we decided to get out and fly just before lunch, down at the Wilfred Taylor reserve. Pulling up at the reserve, I was disappointed to see barely any movement in the nearby trees. However, fresh gusts were coming through from time to time.

I rigged the 2-Skewer Box kite in just over 2 minutes, including attaching the flying line.

Soon the kite was in the air, with my wife May snapping off photos and taking some video too.

With all the cloud around, it wasn't hard to check the wind speed higher up. The clouds, which were much higher now, were scudding across from the west fairly slowly. Even so, I guessed there was at least 15 knots up there. All we had to do was to get the kite up high enough to contact that air. I mentioned Wind Gradient in the title up there. That just refers to how the wind speed increases as you go from ground level up to several hundred feet in the air.

On a day like today, there was sure to be a moderate wind-gradient.

It was clear that hand launching would be an exercise in frustration, since the box kite dropped like a stone during every lull. So, I just walked out about 30 or 40 meters with the kite in hand, pulling line off the winder which was just lying on the grass. Back at the winder end again, it was a simple matter to wait for a gust, then climb the kite up above 50 feet or so.

The 2-Skewer Box kite launches from the ground quite easily. Although it lifts off sideways, the lower cell soon swings back downwind and the kite is ready to climb out. From 50 feet, the wind really started to bite, and I almost got line burn a couple of times while I let the line fly off the winder! 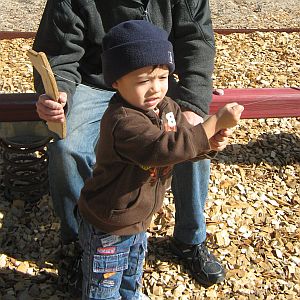 In no time at all, I had let almost all 150 meters of line out as the kite cavorted around, close in position to the bright morning sun. Our 3-year-old held on for dear life for a while—see the photo! The kite seemed to sit around 40 to 50 degrees from the horizontal most of the time.

Despite the cool air temperature, patches of sinking and rising air affected the box kite from time to time. Sinking air would keep it down around 30 degrees or so, pulling like a horse. The lifting air, on one occasion, boosted the 2-Skewer Box kite right up to around 60 degrees. Amazing!

The kite seemed comfortable and stable, so I didn't worry about it floating high up over a section of the reserve which was covered with trees. However, after nearly an hour in the air, something did go wrong!

The kite started to fly low, but still seemed stable. After winding it in a lot closer, it was clear that something was wrong with the lower cell. The vertical cross-piece had slipped out; I have no idea how. That wasn't supposed to happen, since I had glued little lengths of bamboo to the main spars to hold the cross-pieces securely in place.

Perhaps a spar had rotated a little, letting the cross-piece slip past. Maybe the loads on the kite had pulled the two main spars apart far enough to let the cross-piece drop out.

Whatever happened, once one cross-piece goes, it's only a matter of time until they all drop out! Hence, by the time I got the kite back on the ground, only one cross-piece was still on the kite—and it was about to drop out too. Incredibly, the kite was still flyable, although with much reduced performance!

The bottom line is this—the 2-Skewer Box kite is a fantastic traditional-style box kite in terms of flying performance but still needs some refinement to keep those pesky cross-pieces in place! It's looking more and more like I might just tape or glue them in place, like every other kite in the MBK 2-Skewer Series. The kite will still be portable enough to provide a lot of fun.