High and Stable in a Moderate Breeze

At last the much-tweaked 1-Skewer Sode kite has had some great flying. Today it went high up in a light breeze that tended toward moderate at times. It had the attention of birds in the air and people on the ground! 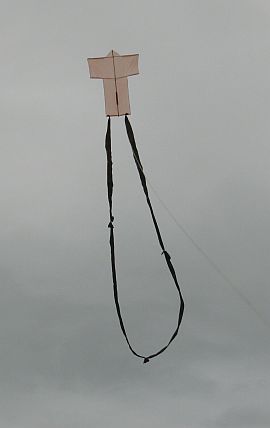 We arrived at our favorite flying field to find a gusty light breeze disturbing the leaves of the surrounding trees. Promising!

Very soon, the little sode was up, and doing ... reasonably well, but I knew it could do better. There was still the tendency to tip stall occasionally. This had the effect of killing any climb before the flying line achieved a respectable angle.

Below 30 degrees, the kite flew fine, but above that, a sudden flick or turn to one side or the other would quickly bring it down again. Sometimes it would even float down inverted, before righting itself close to the ground and climbing back up.

The next step was to bend the upper horizontal spar to give it the same dihedral angle as the lower spar. After relaunching the sode from where it lay on the weed-infested grass, it was immediately clear that the tip stalling problem had largely gone away. Yahoo! However ... as gusts hit the kite from time to time, it would still loop tightly to one side. That's the classic symptom of "not enough tail."

Indeed, adding a couple of loops of plastic to the end of the looped tail really did do the trick! Even when the breeze above treetop height went moderate in strength, the little 1-Skewer Sode just went higher, weaving slightly as this design has always done.

The original kite was done in clear plastic, and had a single, rather long tail.

So, the little sode was now utterly reliable, rising and falling slowly in response to changes in wind strength. Its long tail streamed behind, snaking gently in the breeze. My small son and I just left it for a while, tied up to a small tree trunk on the opposite side of the reserve. At this point we had 60 meters (200 feet) of 20-pound line out. Hence, the kite was at around 150 feet altitude.

A man stopped to watch, craning his neck to spot the tiny high-flying craft. He must have stood there for at least 10 minutes. A sode has "wings" you know! At another time, a number of fast small birds flew around the kite, checking it out. One or two of the braver birds took passes at the kite, rocketing past it very close.

Eventually, we had the line out to 90 meters (300 feet), which is starting to be a bit heavy for this small-area kite. But it coped well, straining away in the moderate breeze.

When it was time to bring the kite down, I let my 4-year-old Aren fly it on a short line while we walked back to the car. The tiny orange kite continued to fly reliably in the gustier air down low, so I managed to get a few photos of Aren and the 1-Skewer Sode in the same frame.