While the orange 1-Skewer Sled kite flew today, the sun was gamely trying to peek through. It never quite succeeded. But never mind, it was a great first outing for the spanking new little sled. I went up to the nearby vacant block, which afforded plenty of room to test fly a 1-Skewer design. 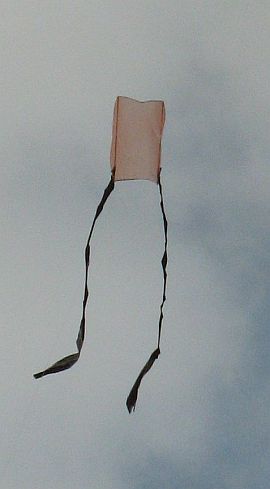 The forecast had predicted 10 to 15 knot winds, moderating to 5 to 10 knots later in the day. Around 2 pm, the winds were still decidedly in the moderate range and even gusting to rather fresh speeds just before I came home.

On arriving at the grassy block of land, I removed the winder of 20-pound line and the rolled-up sled from the inner pockets of my jacket. It would be easy to smuggle this kite into any venue! There wouldn't be much point though, since its indoor performance would not be great.

Despite being in a somewhat sheltered position near a tall fence, the 1-Skewer Sled kite was soon aloft.

Initial impressions were that the kite was very stable and collapse resistant. Letting 10 or 15 meters (40 feet) of line out, I took a few photos. Then, after letting out another 10 meters (35 feet) of line, I zoomed in close and shot off some video.

The moderate gusty breeze was not a problem at all, although the kite had a slight lean to the right. Annoyingly, the ribbon tails quickly wound up, leaving only a short section flat, right at the end. So the tails looked like a couple of paddles! They still seemed to be doing the job though—see the photo.

The sled seemed to be holding around a 45 degree angle most of the time, with a decent pull for so small a kite! After a while I took it down and pinched off a centimeter (half an inch) of plastic from the right tail. This didn't have much effect, so brought the kite down again and pinched off another couple of centimeters. Eventually, the kite ended up with the right tail some 6 or 7 cm (3 in.) shorter than the left tail, to correct its tendency to fly to the right. It's not often that a kite this size will fly perfectly true without adjustments. For one thing, no two BBQ skewers are the same!

I eventually flew on 60 meters (200 feet) of line for a while. This required carefully monitoring of the kite's distance from surrounding trees and power lines running beside the main road, just in case. Most flying was done on about 40 meters (140 feet) of line. Even on that much, the kite was starting to look pretty small!

The winds seemed to strengthen a little during the last flight. The highest wind speeds blew the game little sled kite down to 30 degrees or so. But it hung in there, and never looped out of control.

At other times, rising air came through, causing a lowering of the line tension while the kite floated face down. So, a few nice thermal climbs resulted when I let the kite float vertically upward with line slipping slowly through my fingers.

There was an exhilarating moment on 60 meters (200 feet) of line when the tiny 1-Skewer Sled kite reached a 60 degree flying angle. A short time later, it got punished with a blast of fresh wind and I had to pull in line very quickly to avoid a close call with some tall trees!

I must say that I'm very happy with the performance of this small sled. It is definitely a better and more reliable flyer overall than the original clear-plastic tape-edged 1-Skewer Sled kite.